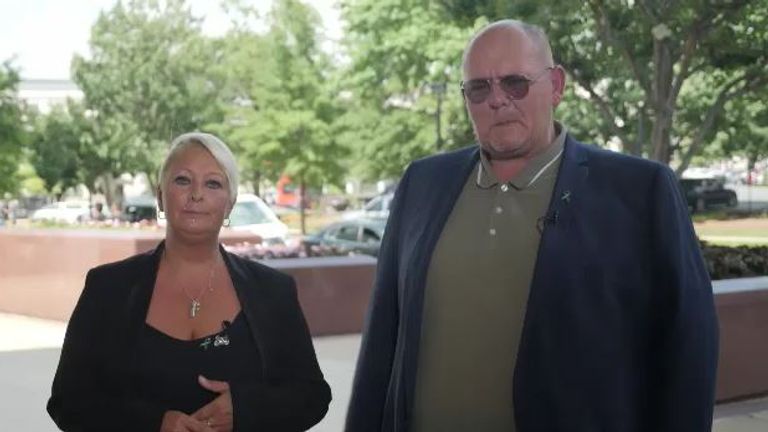 Harry Dunn’s alleged killer Anne Sacoolas could have been “distracted by her mobile phone” moments before the fatal road crash, his family’s lawyers have claimed.

“Relevant data from her phone” has also disappeared and the 43-year-old has been “evasive” over whether she was using it at the time of the collision, according to court documents detailing the new allegations.

Mr Dunn, 19, died in August 2019 after a car hit his motorbike near RAF Croughton in Northamptonshire.

Mrs Sacoolas was granted diplomatic immunity after the collision and allowed to return to the US, despite being charged with causing death by dangerous driving.

After Mrs Sacoolas was charged by the Crown Prosecution Service (CPS), a Home Office extradition request was rejected by the US State Department in January last year.

The latest court documents submitted by the Dunn family’s lawyers are part of their opposition to a proposed “protective order”, which was filed by the US administration in a bid to keep the employment details of Mrs Sacoolas and her husband secret.

Later this month, Mrs Sacoolas and her husband Jonathan face the deposition process as part of the US civil claim in the state of Virginia.

It will likely be the first time the Dunn family and their son’s alleged killer will be in the same room.

The opposition motion from the Dunn family’s legal team reads: “Discovery thus far raises the possibility that Ms Sacoolas was distracted by her mobile telephone… and establishes that relevant phone data was deleted.”

The motion adds that the Dunn family have been pursuing “a line of inquiry about Ms Sacoolas’ phone” for more than three months.

But it said that to date, Mrs Sacoolas’ responses have, at different times, “been evasive, non-responsive and inconsistent”, and underscore why the Dunn family should be allowed to inquire further.

It reads: “In short, at the time of the accident, Ms Sacoolas’ phone was with her in her car.

“The data on that phone likely would reveal whether she was using the phone just before or at the time of the collision, for example, speaking to someone on a call, reading a text, checking the weather, or otherwise engaged with her phone so as to be distracted from realising that she was driving on the wrong side of the road.

“However, relevant data from her phone is now missing.”

Commenting on the opposition motion, Mr Seiger said: “The US government’s decision-making process has been impossible to understand from the moment they learned of Harry’s death.

“Instead of seeking to do the right thing for the family then, they foolishly decided to put their own interests first despite warnings from all of us that it would backfire in their faces.”

He added that the US government “are once again choosing to put their own interests first and trying to ensure that a legitimate line of inquiry is shut down and to minimise what happened to Harry”.

“They appear to have been brought in by Mrs Sacoolas’ lawyers as hired guns,” he said.

“As our lawyers have made clear consistently, we have no wish to lay bare their national security secrets. We just want to get to the bottom of things and that is just what we intend to do.”