He Promised to Transform Colombia as President. Can He Fulfill That Vow? 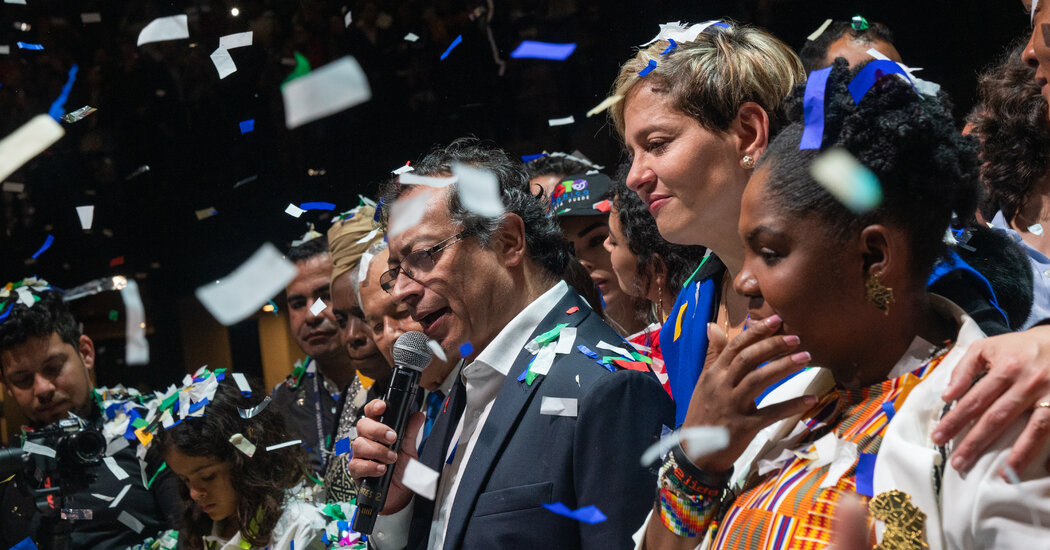 BOGOTÁ, Colombia — In a packed arena in Bogotá on Sunday, amid a burst of confetti and below a sign that read “Colombia won,” Gustavo Petro celebrated his victory as the first leftist ever elected president of Colombia.

“The government of hope has arrived,” said the former rebel and longtime legislator, to a cascade of cheers.

For decades, Colombia has been one of the most conservative countries in Latin America, where the left has long been associated with a violent insurgency and past leftist presidential candidates have been assassinated on the campaign trail.

Against that backdrop, Mr. Petro’s win was historic, signaling voters’ frustration with a right-wing establishment that many said had failed to address generations of poverty and inequality that have only worsened during the pandemic.

Mr. Petro’s choice for running mate, Francia Márquez, an environmental activist who will be the country’s first Black vice president, made the victory all the more exceptional. Some of the highest voter turnout rates were recorded in some of the poorest and most neglected parts of the country, suggesting that many people identified with her prominent and repeated calls for inclusion, social justice and environmental protection.

As a candidate, Mr. Petro promised to reshape some of the most important sectors of Colombian society in a nation that is among the most unequal in Latin America.

But now that he will occupy the presidential palace, he will soon have to turn those pledges — some of which critics call radical — into action.

“This is a program of very deep transformations,” said Yann Basset, a political science professor at Rosario University in Bogotá. “On all these issues he is going to need significant support from Congress, which promises to be quite difficult.”

He will pay for this, in part, he says, by raising taxes on the 4,000 wealthiest families, removing some corporate tax benefits, raising some import tariffs and targeting tax evaders.

A core part of his platform is a plan to shift from what he calls Colombia’s “old extractive economy,” based on oil and coal, to one focused on other industries, in part to fight climate change.

Some of Mr. Petro’s policies could cause tension with the United States, which has poured billions of dollars into Colombia in the last two decades to help its governments halt the production and export of cocaine, to little effect.. Mr. Petro has promised to remake the country’s strategy on drugs, shifting away from the eradication of the coca crop, the base product in cocaine, to emphasizing rural development.

Washington has already begun moving in the direction of prioritizing development, but Mr. Petro could clash with U.S. officials on precisely what this looks like.

Mr. Petro has also pledged to fully implement the 2016 peace deal with the country’s largest rebel group, the Revolutionary Armed Forces of Colombia, or FARC, and to slow the destruction of the Colombian Amazon, where deforestation has risen to new highs in recent years.

One of Mr. Petro’s biggest challenges will be paying for his ambitious agenda, in particular finding new revenue to compensate for lost oil and coal money while expanding social programs.

Two other leftists, Gabriel Boric in Chile and Pedro Castillo in Peru, have taken office recently with ambitious promises to expand social programs, only to have their popularity plummet amid rising inflation, among other issues.

Colombia collects less in taxes as a proportion of its gross domestic product compared with almost every other country in the region.

The country already has a high deficit, and last year, when the current president, Iván Duque, attempted to pursue a tax plan to help lower it, hundreds of thousands of people took to the street in protest.

“The budget numbers just don’t add up,” James Bosworth, the founder of Hxagon, a political risk consulting firm in Bogotá, wrote in a newsletter on Monday. “The costs on Petro’s proposed social programs are likely to burn through the budget and leave a rapidly widening deficit.”

“By year two or three of his administration,” Mr. Bosworth continued, “he’s going to have to make tough choices due to financial restrictions and that will end up angering some portion of the coalition that elected him.”

Mauricio Cárdenas, a former finance minister, said that the first step Mr. Petro should take is to announce an experienced finance minister who can calm market and investor fears by assuring the public that he will not be engaging in runaway spending or excessive government intervention.

Another major challenge could be working with Congress. Mr. Petro’s coalition, called the Historic Pact, has the largest number of lawmakers in the legislature. But he does not have a majority, which he will need to push through his agenda. He has already reached out to political leaders outside his coalition, but it’s unclear how much support he will gain — and whether forming new alliances will force him to give up some of his proposals.

“I think he is going to have to abandon certain parts of this program,” Mr. Basset said. “In any case, I believe that he does not have a majority to implement everything he has promised.”

Mr. Petro will also inherit a deeply polarized society, divided by class, race, region and ethnicity and scarred by years of violence and war.

For decades, Colombia’s government fought the FARC, and the war grew into a complex battle among left-wing guerrilla groups, right-wing paramilitaries and the military, all of which have been accused of human rights abuses.

Despite the 2016 peace accord with the FARC, many of the fault lines of the conflict remain, which has been supercharged by social media, allowing rumor and misinformation to fly.

Polls before the election showed growing distrust in almost all major institutions.

“This election in my mind is by far the most polarized that we’ve seen in Colombia in many years,” said Arlene B. Tickner, a political scientist at Rosario University. “So simply calming the waters and speaking to in particular those voters and those sectors of Colombian society that did not choose him, and that have significant fears about a Petro presidency, I think is going to be a key challenge.”

One of Mr. Petro’s most difficult tasks could be addressing violence in the countryside.

Despite the peace deal, armed groups have continued to flourish, mostly in rural areas, feeding off the drug trade, the cattle industry, human trafficking and other activities.

Homicides, massacres and the killings of social leaders are all up in recent years, and internal displacement remains high, with 147,000 people forced to flee their homes last year, according to government data.

Many people affected by this violence voted for Mr. Petro and Ms. Márquez, who was born in Cauca, one of the hardest hit parts of Colombia.

Mr. Petro’s plan to address the violence includes a land reform that would discourage the ownership of large land parcels through taxation and give land titles to poor people whose lack of resources often indentures them to armed groups.

But land reform has stymied president after president, and Mr. Petro admitted in an interview this year that it may be “the hardest” part of his campaign pledges to fulfill.

“Because it’s this topic that has caused Colombia’s wars,” he said.

Elon Musk: Daughter applies to legally change name, as she wants nothing more to do with father | US News