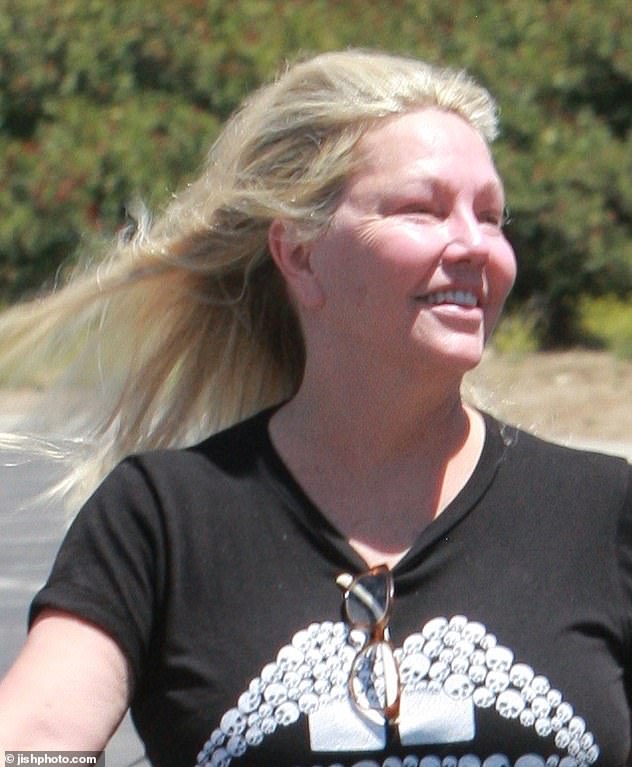 The Melrose Place alum, 59, and her high school sweetheart were spotted Monday afternoon perusing stores in the antique mall in Agoura Hills, California.

While the actress wasn’t wearing her engagement ring, the lovebirds are still very much together and were even acting like an old married couple, according to witnesses.

The Melrose Place alum, who has cleaned up her act following a highly-publicized stint in rehab in 2018, appeared to sporting a plumper face and ditched the makeup during the outing 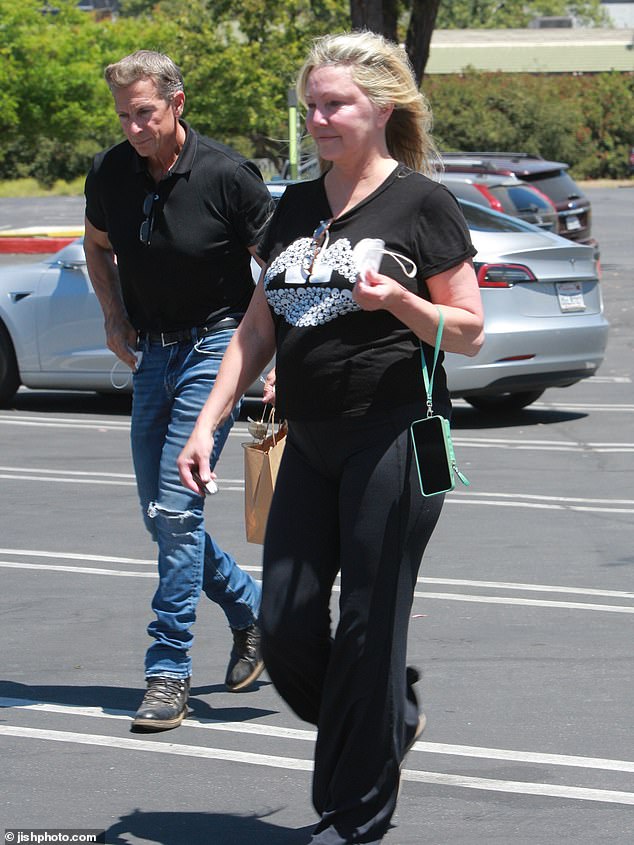 Happy again! Heather Locklear appeared cheerful and energetic during a trip to the antique mall in Agoura Hills, with her fiancé Chriss Heisser on Monday 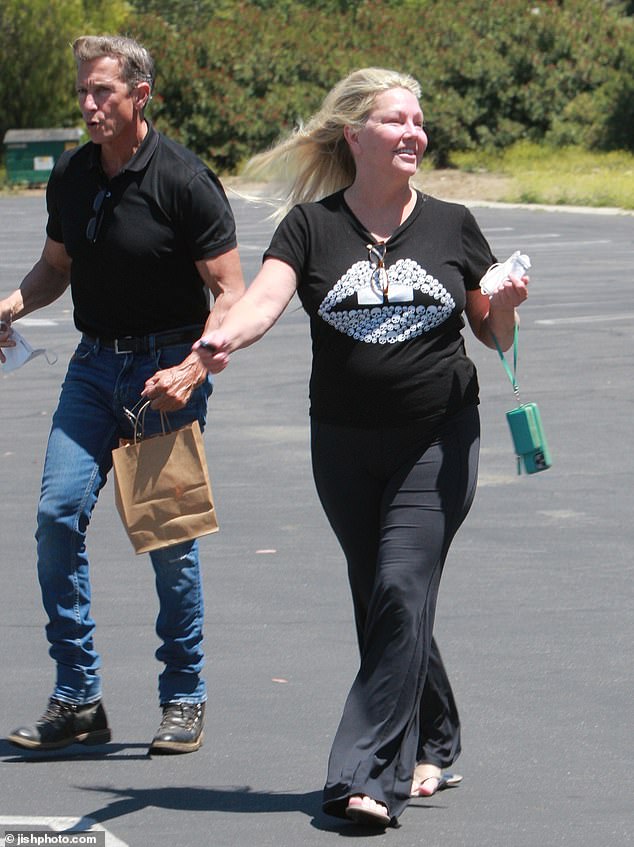 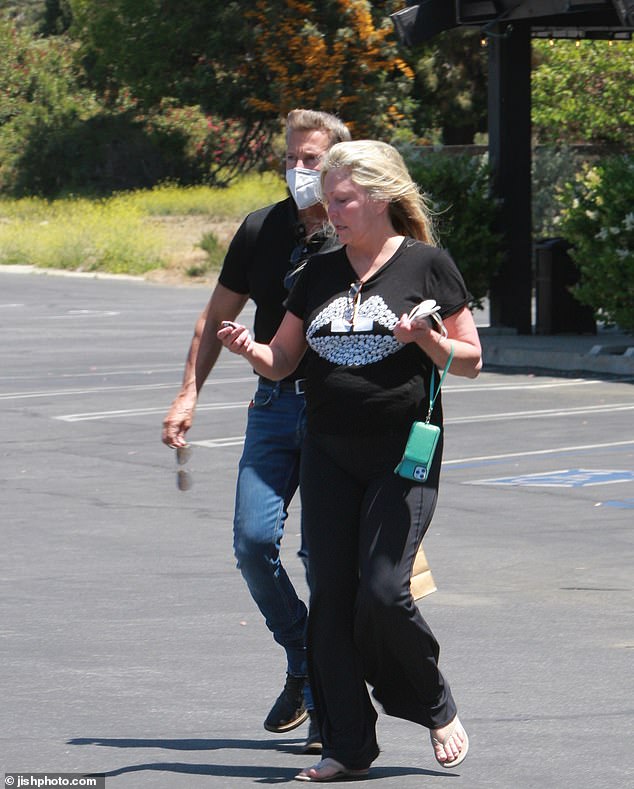 One onlooker told DailyMail.com: ‘They are very comfortable together, Heather seems like she can relax and just be herself.

‘She wasn’t wearing a bit of makeup but was happy and laughing as they poked their heads in the various stores.

‘Chris wasn’t one of these guys who waits outside while his partner shops, he was into it!’

‘Heather led the way,’ the source added, ‘and Chris followed as they searched for a gift item.’

She must have found the perfect trinket at MIXT-Fine Things, a home goods store with both old and new items.

Heather emerged holding a small bag and laughing at something Chris had said. 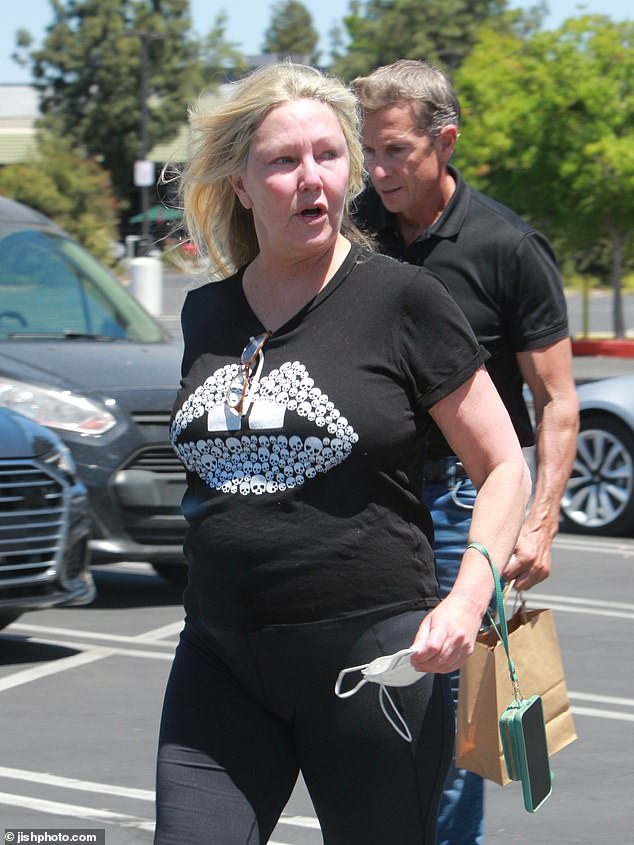 According to an onlooker, Chris – pictured holding a shopping bag – ‘wasn’t one of these guys who waits outside while his partner shops’, and was actually ‘into it’ 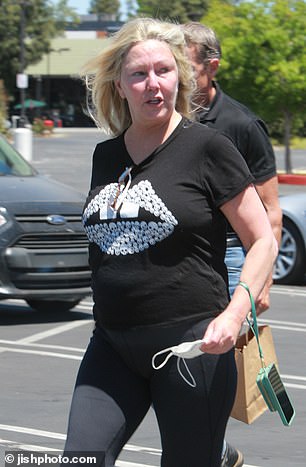 Heather (pictured holding a mask and phone) and Chris appeared to be shopping for gifts at the popular Whizin Market Square, located just a few miles away from her $4.8million Westlake Village area home 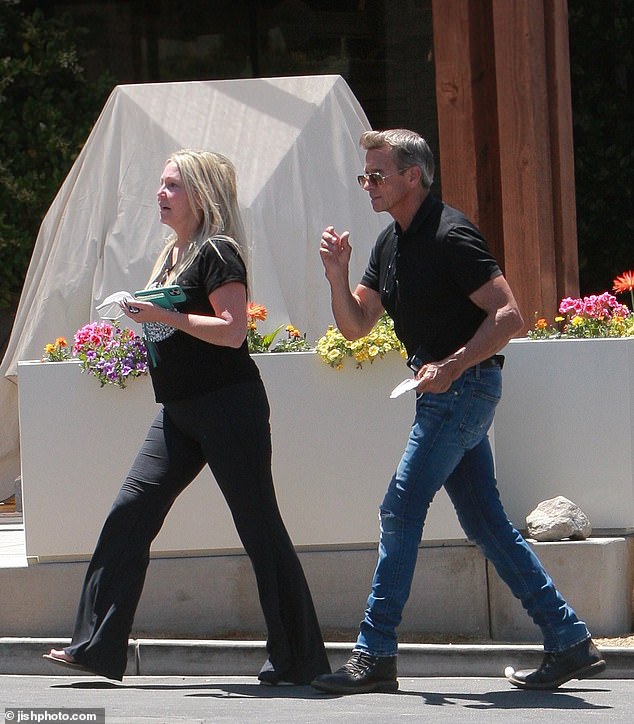 One witness told DailyMail.com, ‘Heather led the way and Chris followed as they searched for a gift item’ 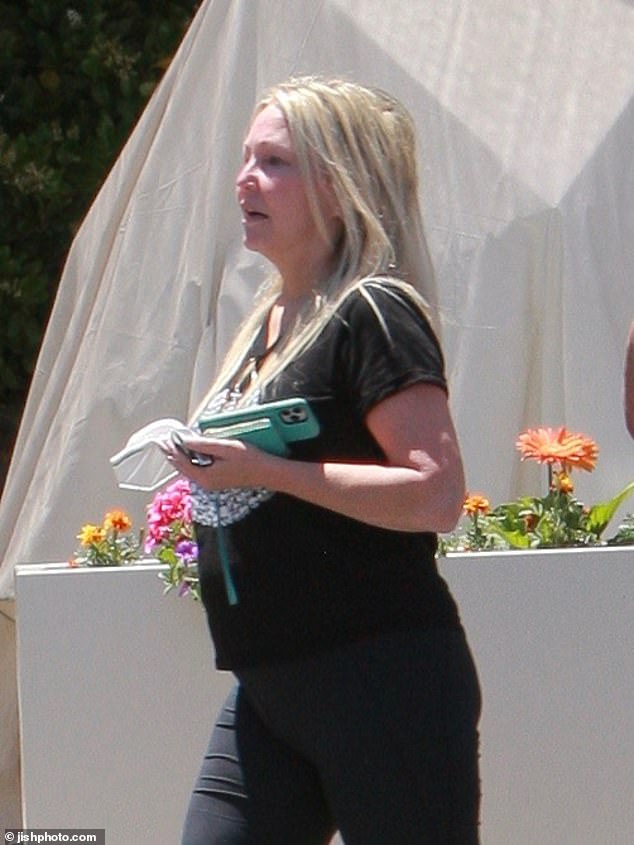 Heather and Chris were the picture of love on Monday, three years after the actress’s battle with addiction almost derailed the romance

This isn’t the first time she has been spotted without a rock on her ring finger, despite being in what seems to be a happy relationship with her beau.

In March, Heather ditched the ring as went shopping with a friend in the San Fernando Valley.

And in December, she was seen pumping gas near her four-acre mansion in Thousand Oaks and the diamond was noticeably absent from her finger.

DailyMail.com broke the exciting news last June that three years after rekindling her relationship with her high school sweetheart, she accepted Chris’s proposal. 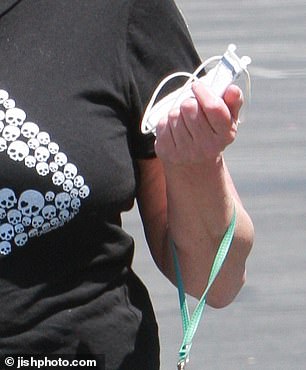 The road to true love has been a trying and difficult one for the couple who dated while attending Newbury Park High School.

They graduated in 1979, and were even voted Prom King and Queen.

Chris gained success as an AMA motocross racer, and a contractor, he has also been married and divorced, and has four children.

They reconnected in 2017, with Heather posting a photo in September of that year to her Instagram account of them in bed with the caption: ‘My favorite person on earth. 40 years later.’

She was arrested on February 25, 2018 after allegedly fighting with Chris and attacking the police officers that responded to the 911 call her brother Mark made to her home. 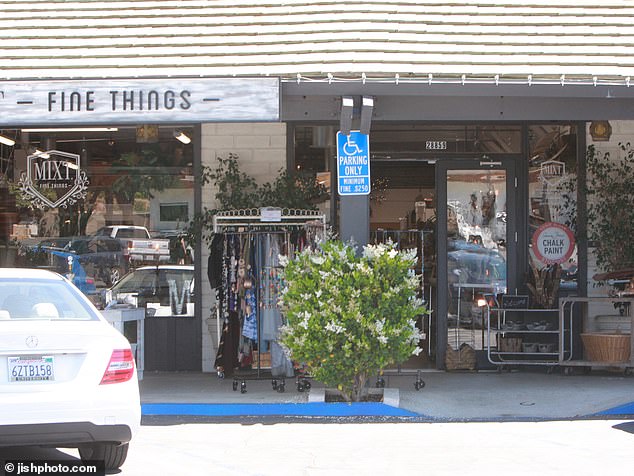 The pair spent the afternoon perusing the shops, and at one point popped into MIXT-Fine Things (pictured) a home goods store with both old and new items 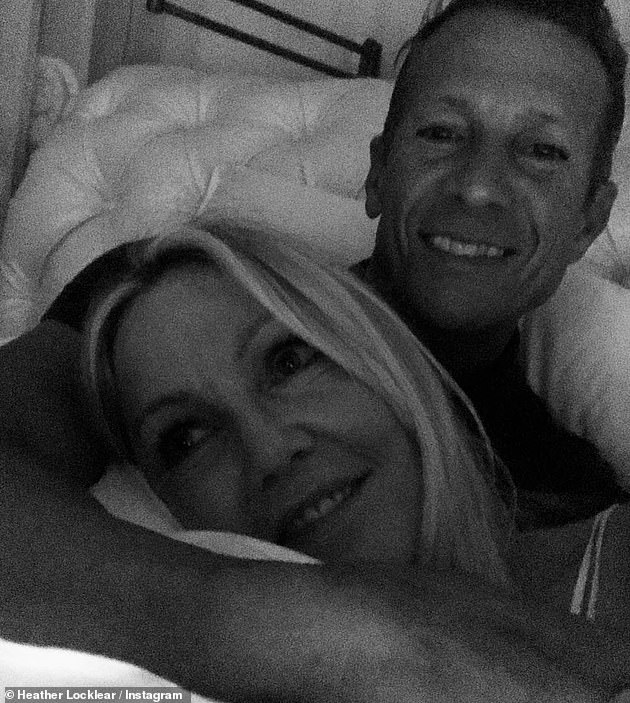 DailyMail.com broke the exciting news in June that three years after rekindling her relationship with her high school sweetheart Chris Heisser, she accepted his proposal 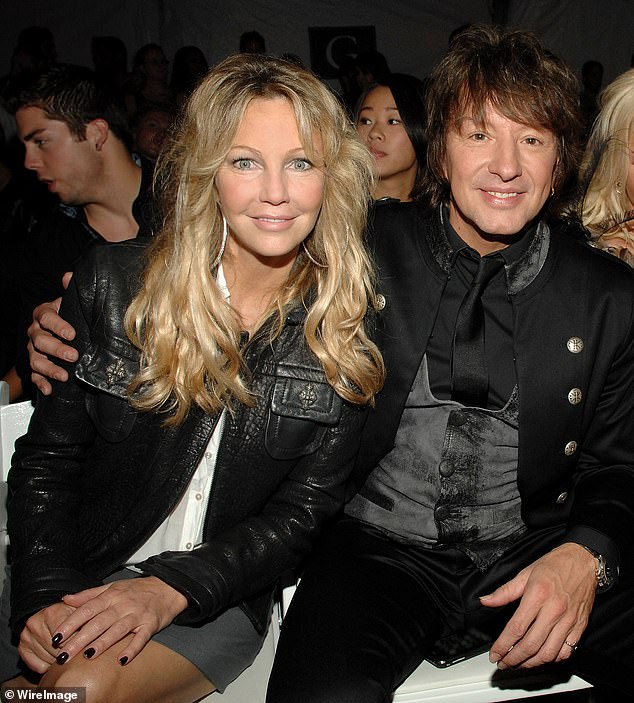 Heather and Chris were once an item longer before she went on to marry rockers Tommy Lee and Richie Sambora (pictured in 2011) from 1994 to 2007, with whom she has a daughter, Ava, 23

According to reports filed about the incident, Chris was found to have visible marks on his body due to the intense altercation.

Domestic violence charges against the star were later dropped, but a stint in rehab followed.

Chris was arrested on a DUI charge on February 26, 2018, following the incident.

In June of 2018, Heather was arrested again, under similar circumstances for two counts of misdemeanor battery on first responders.

More than a year later she pleaded ‘no contest’ to charges stemming from that arrest and was sentenced to 30 days in a residential mental health facility.

The couple became engaged in April of 2020, after Heather had completed a full year of sobriety. 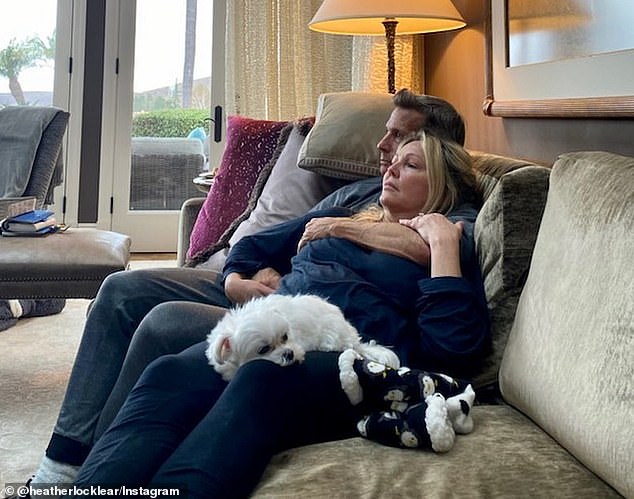 Though it’s unclear why Locklear stepped out without her ring then and now, DailyMail.com understands that Heather is still engaged to her man and often posts photos with him on social media

Locklear marked the occasion with a thoughtful Instagram post, in which she shared a long quote from Maya Angelou, presumably in reference to some of the things she has learned over the past 12 months.

The quote she posted included the following: ‘I’ve learned that no matter what happens, or how bad its seems today, life does go on and and it will be better tomorrow….

She continues to posts photos with Chris on social media suggesting the two have managed to successfully work through their issues.

On Valentine’s Day this year, Heather posted a sweet note – along with pink and red roses – from her fiancé, which read: ‘Happy Valentine’s Day! I love you forever, Chris.’