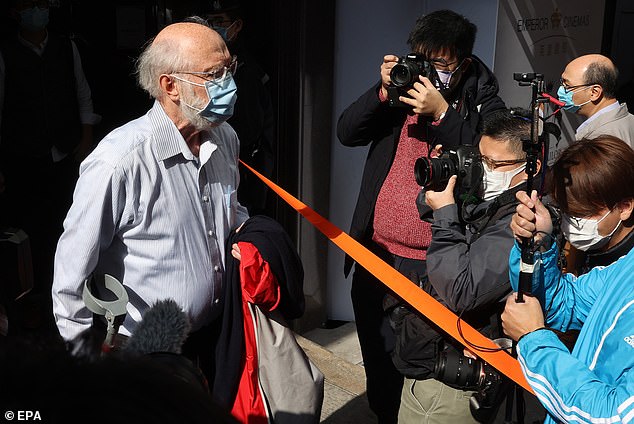 An American human rights lawyer was among 50 people arrested in Hong Kong today in a dramatic escalation of China’s crackdown on opposition in the city.

John Clancey was led away and detained on suspicion of ‘subversion’ after national security police searched his law firm which is known for taking on human rights cases in the former British colony.

Clancey, the first US national arrested under the draconian new security law that Beijing imposed on Hong Kong last year, is a veteran legal activist and a fluent Cantonese speaker who lives in the city that was roiled by protests last year.

‘Continue to work for democracy and human rights in Hong Kong,’ he told reporters as he was led away by officers.

The sweep is the latest salvo in Beijing’s battle to stamp out opposition after millions hit the streets in 2019 with huge and sometimes violent democracy protests.

Police confirmed 53 people were arrested for ‘subversion’ in an early morning operation that involved some 1,000 officers.

The charges were sparked by an attempt by opposition groups last year to win a majority in the city’s partially-elected legislature.

US human rights lawyer John Clancey was among those arrested in the Central district, becoming the first American detained under the national security law 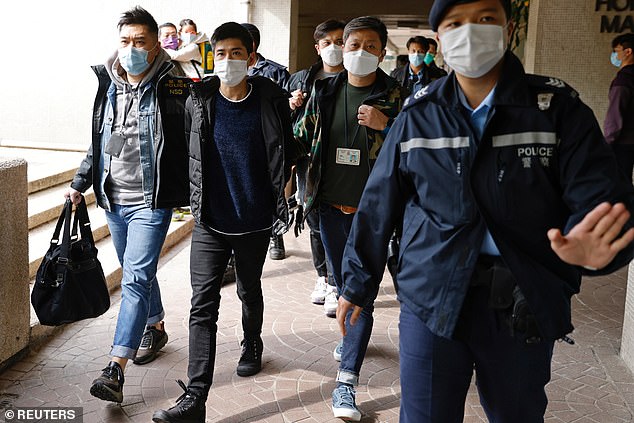 Hong Kong’s security chief John Lee described the arrests as ‘necessary’ and aimed at a group of people who tried to ‘sink Hong Kong into an abyss’.

But the operation sparked a rebuke from Antony Blinken, Joe Biden’s pick for Secretary of State, who said authorities were launching ‘an assault on those bravely advocating for universal rights’.

‘The Biden-Harris administration will stand with the people of Hong Kong and against Beijing’s crackdown on democracy,’ he added.

Those detained represented a broad cross-section of Hong Kong’s opposition, from veteran former pro-democracy lawmakers such as James To, Andrew Wan, Lam Cheuk-ting and Claudia Mo to a host of younger activists.

Colleagues of Joshua Wong, one of the city’s most famous democracy activists who is currently in jail, said via his official Facebook account that his home was searched. 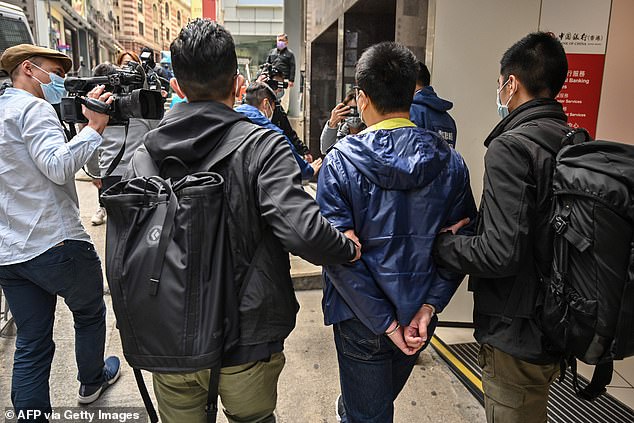 Ben Chung, a member of a pro-democracy political group, is led away by police during the round-up of more than 50 Hong Kong opposition figures

‘This is a real night of the long knives, the largest single attack upon democracy in Hong Kong yet,’ said Antony Dapiran, a lawyer who has written books on the city’s protest movement.

Nathan Law, a prominent democracy leader who fled overseas last year, accused authorities of trying to ‘extinguish the flames of resistance’ with the latest arrests.

The foundations of Wednesday’s mass arrests were laid last summer when pro-democracy parties organised an unofficial primary for local legislative elections which were ultimately scrapped altogether.

Only half the legislature’s 70-seats are popularly elected. The campaign’s aim was to win all 35 elected seats and take a majority in the legislature for the first time and try to block government policies. 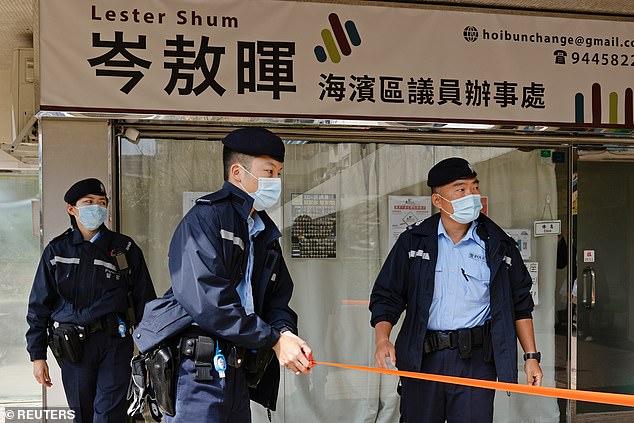 Police outside Lester Shum’s office during the crackdown in the former British colony, where China is accused of dismantling the ‘one country, two systems’ arrangement

More than 600,000 Hong Kongers turned out to vote in the unofficial poll which infuriated Beijing.

Chinese officials at the time warned any attempt to win a majority and block government policies constituted ‘subversion’ under the new security law.

The national security law was imposed on Hong Kong in late June in response to the 2019 protests, targeting acts Beijing deems to be secession, subversion, terrorism and collusion with foreign forces.

Officials said the security law would only target an ‘extreme minority’.

But it swiftly silenced dissent and outlawed a host of peaceful political views with dozens of prominent figures targeted even before Wednesday’s operation.

Over the course of the last year, prominent democracy supporters have been arrested, jailed, barred from politics or have fled overseas.

National security crimes carry a maximum of life in prison and bail is not usually granted for those who are charged.

China has claimed jurisdiction over especially serious security crimes and has allowed its security agents to operate openly in the city for the first time.

‘I will fight for you’: Democrat Raphael Warnock declares victory in Georgia Senate runoff – video | US news

Londoners wake to snow as ‘Beast from the East’ sweeps UK