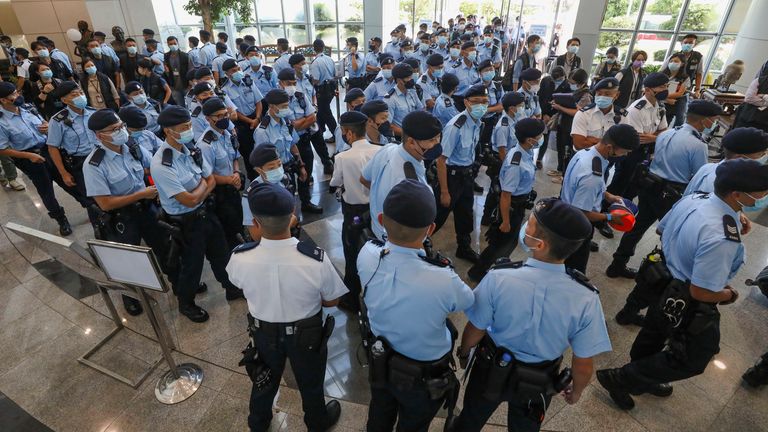 The most senior editor and four other bosses at a pro-democracy newspaper have been arrested under Hong Kong’s new national security law.

The editor-in-chief, publisher and three other senior executives at the tabloid Apple Daily were held early on Thursday for breaching the Beijing-imposed legislation.

It came as 500 officers raided the offices of the newspaper, with reporters’ computers and phones seized and notebooks sifted through.

The newspaper’s founder, billionaire pro-democracy campaigner Jimmy Lai, was jailed in April for participating in the 2019 protests and faces multiple other charges.

The latest five arrested are being held on suspicion of colluding with a foreign country or external elements to endanger national security, AP reported.

Several Apple Daily articles that called on foreign countries to impose sanctions on China and Hong Kong were cited as the reason for their detention.

It is the first case in which authorities have cited media articles as potentially violating the national security law.

The Hong Kong government’s security secretary, John Lee, described Apple Daily’s newsroom as a “crime scene” and said the police action was targeted at those who use reporting as a “tool to endanger” national security.

Mr Lee said: “Normal journalists are different from these people.”

He then told reporters: “Don’t collude with them. Do your journalistic work as freely as you like in accordance with the law, provided you do not conspire or have any intention to break… the national security law.”

Apple Daily has a history of calling for democracy in Hong Kong and has long criticised the regional government and Beijing’s ruling Chinese Communist Party for extending its control over the territory.

The “One country, two systems is dead” headline, which was published on the July 2020 anniversary of the 1997 handover of the territory from Britain to China, referred to the Chinese promise that Hong Kong would keep for 50 years civil freedoms that it had enjoyed under British rule that had not applied on the mainland.


Raab: ‘China is violating the freedom of Hong Kong’

Many supporters of the principle of free speech see the recent introduction of Hong Kong’s security laws as a broad-based crackdown on a free press and anyone who publicly disagrees with Beijing’s actions.

They were brought in after mass protests against the government that lasted for months in 2019 and have seen numerous pro-democracy activists and former protesters also jailed.

The UK has introduced a new visa system to make it much easier for millions of people in Hong Kong to live and work in the UK, after China imposed the draconian security laws on the territory.

Assets connected to Apple Daily were also seized during Thursday’s raid and trading in stock belonging to the companies that publish it was also halted.