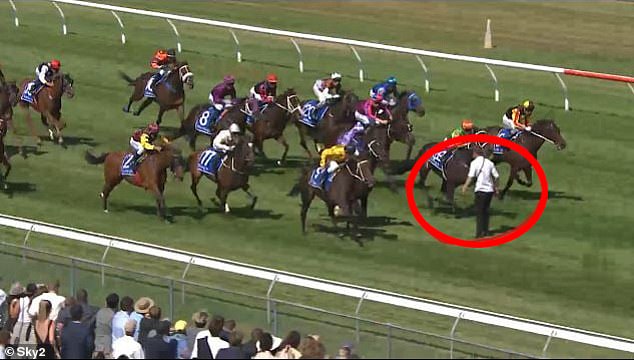 A punter has narrowly escaped serious injury after he foolishly stood in the middle of a track during a horse race in New Zealand.

Racegoers who packed into Trentham Racecourse for the Wellington Cup on Saturday afternoon were in disbelief as the man entered the course just moments before the field of horses charged towards the winning post.

The jockeys miraculously managed to dodge the man, who was dressed in a white button up and black pants.

Moments after walking away unscathed, the man raised his arms into the air, in an apparent attempt to celebrate his survival.

The man was arrested by police and removed from the ground. It’s understood he will likely be charged with endangering public safety.

‘He was lucky he didn’t get run over,’ champion jockey Danielle Johnson said.

‘Most of us didn’t see him until late.’

One punter told stuff.co.nz the intruder jumped over a fence about 150 metres from the finish line during race eight.

‘The guys was stupid. All the horses had to separate around him. It’s more about the safety of the horses and jockeys,’ she said.

‘Everyone was yelling at him… there was quite a bit of outcry from the crowd when they (police) were taking him away.’ 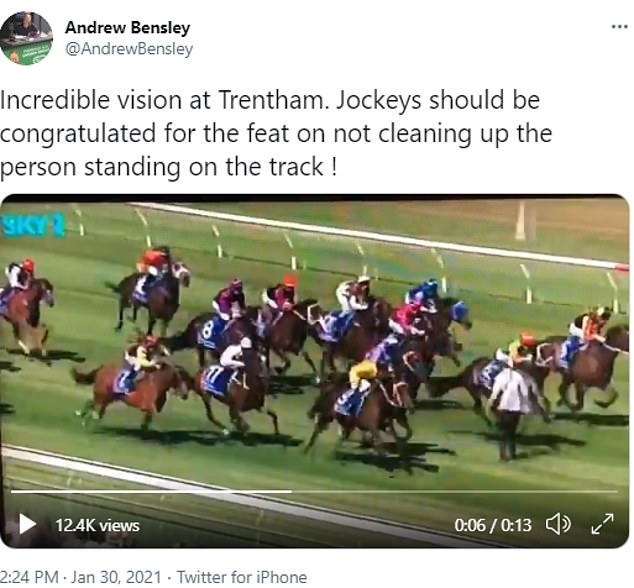 Not surprisingly, the man’s foolish behaviour was all over social media.

Racing commentator Andrew Bensley tweeted that the ‘jockeys should be congratulated for not cleaning up the person standing on the track’.

Another racing fan stated he ‘was still in disbelief’ after watching a replay of the incident.

Te Akau Racing, a long standing New Zealand racing powerhouse, tweeted that the situation was ‘barbaric’ and that the man ‘could have killed our horses and our humans — and himself.’

Racing broadcaster Aidan Rodley described the scenes as ‘incredible’, before adding the ‘idiot is lucky to be alive.’

In the drama-filled race at Trentham, Ruby Rocks was first past the post, beating home Flying Surf and Bruno Magile.

The Wellington Cup is one of New Zealand’s biggest days on the racing calendar. 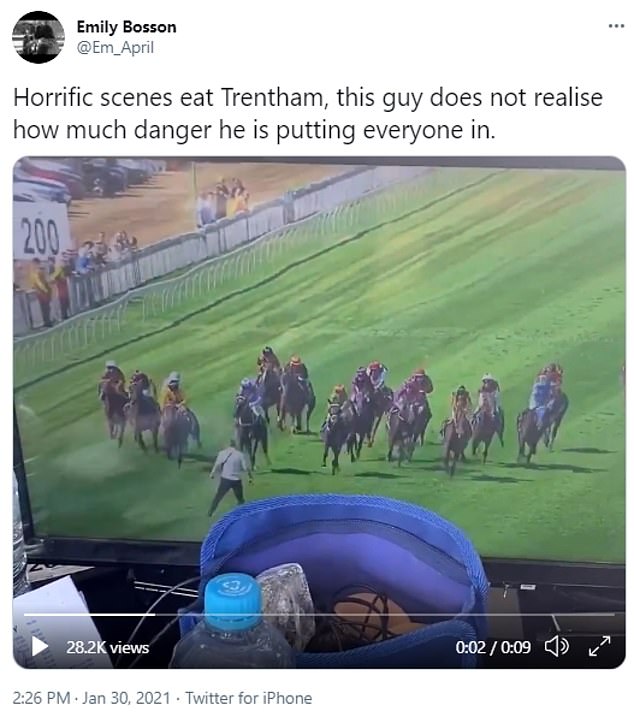 Michelle Obama to be inducted into US National Women’s…

‘I was shaking inside’: Bangladesh’s first transgender TV…