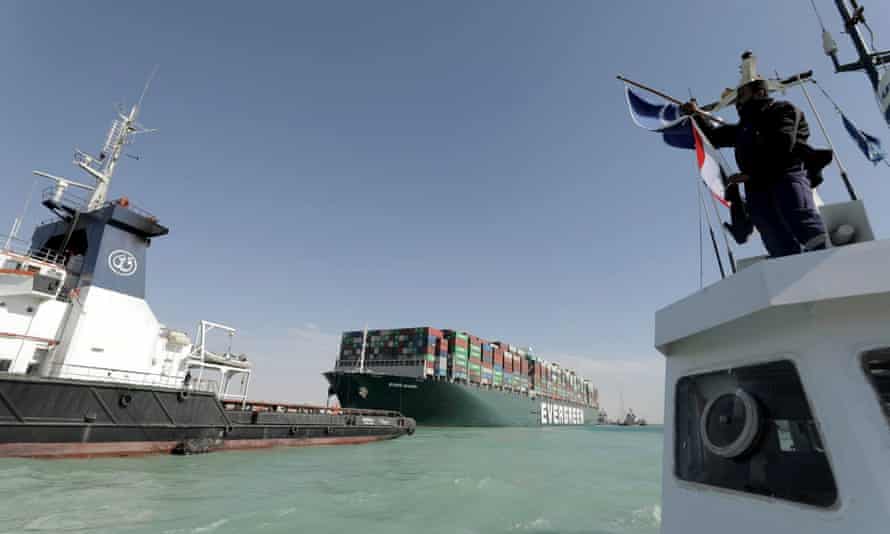 In the end the difference was made by two high-powered tugboats and a force even greater: a tide that swelled to its highest point in months with the full moon, and then powerfully ebbed, helping to free the Ever Given.

The week-long operation in the Suez Canal had struggled to make progress and looked as though it might stretch for weeks until Sunday, when nature and logistics aligned, according to the boss of the Dutch salvaging unit that helped run the operation, who has given the fullest account of the mission so far to news outlets in the Netherlands.

For five long days and nights, the team of Egyptian, Dutch and Japanese workers dredged huge amounts of sand and attempted to pull the vessel free using nearly a dozen ordinary tugboats.

“[But] the real work could only begin once the two powerful seagoing tugs arrived,” Peter Berdowski, the chief executive of Boskalis, told NPO Radio 1. “We always thought that what happened until that point would help a bit but wouldn’t be enough.”

There had been few such tugs stationed nearby – the top of the Red Sea is usually a quiet environment – and with the canal blocked, they needed to come from the southern end, further reducing the available options.

The first, the Alp Guard, capable of pulling 3,326 tonnes of deadweight, arrived on Sunday morning. The dredging by crews including those on the Egyptian vessel Mashhour had helped to shift 30,000 cubic metres of sand over the past week. In the early hours of Monday morning, there was optimism on the banks of the canal, including among Boskalis’s team of 15 people onsite.

“I was 70% sure it would happen [on Monday], because it had started to shift a little [on Sunday],” Berdowski said. “Things were starting to move.”

By sunrise, the boat’s stern – stuck for nearly a week about 4 metres from the shoreline – had been dragged 120 metres into the canal, sparking cheers and cries of “God is great”.

The floating stern provided the salvage team “a huge 400m lever” to help lift the front end of the ship that was still wedged in the clay of the banks, Berdowski told the Dutch newspaper Het Financieele Dagblad.

On Monday morning a second powerful tug, the Carlo Magno – the Italian name of the Frank king Charlemagne – pulled into view and prepared for a noontime charge to free the bow.

Working with their Egyptian colleagues, the Dutch consultants were running numbers. “Boskalis’s role was basically to do the calculations, the sums,” Berdowski said. “So when the stern came free [on Monday] morning, we calculated that we should let 2,000 tonnes of water ballast in at the rear of the vessel, to push the stern down and lift the bow.

“That’s the kind of calculation work we do, work out the exact position where we need to attach the tugs, which precise direction they should be pulling in, at what time, so we can make maximum use of the tide, that kind of thing.”

The high spring tide rose at noon and sharply ebbed over the next hours, acting as an invisible hand pushing on the upstream end of the vessel, as the flotilla of tugs pulled from downstream.

“We were helped hugely by the strength of the tide,” Berdowski said. “You’re dealing with a force that is actually greater than that of the two seagoing tugs.”

He told the newspaper: “Of course the soil must also cooperate. There were reports that there might be a rock underneath, but that turned out not to be the case.”

At around 3pm on Monday, the bow of the vessel was refloated, ending what could have become a weeks-long operation costing global trade $6bn-$10bn a day.

“We didn’t have to remove any more sand,” Berdowski said. “That was plan B, we were ready for that, and for plan C which was to start removing containers. But we hoped plan A would work and … it did.”

The successful mission has been widely celebrated in Egypt, including by the crew of the Mashhour.

“We had to wait five days until we had the kind of vessels that were capable of getting the job done,” Berdowski said. “We knew we wouldn’t be able to get much done before that point … and once they got here, we were done in a day.”

Having contributed to the resumption of more than a tenth of global trade, the Boskalis team had no plans to stick around in Egypt, scheduled to fly out on Monday. The Ever Given was only the most prominent and valuable ship to run into trouble this past week. “Five other jobs are waiting for us,” Boskalis said.

Tens of thousands of Palestinians displaced in Gaza: UN |…

Spain Turns to Corruption Rehab for Officials Who Can’t Stop…