In a Tough Year, a Nativity Scene ‘That Has Had Problems’ 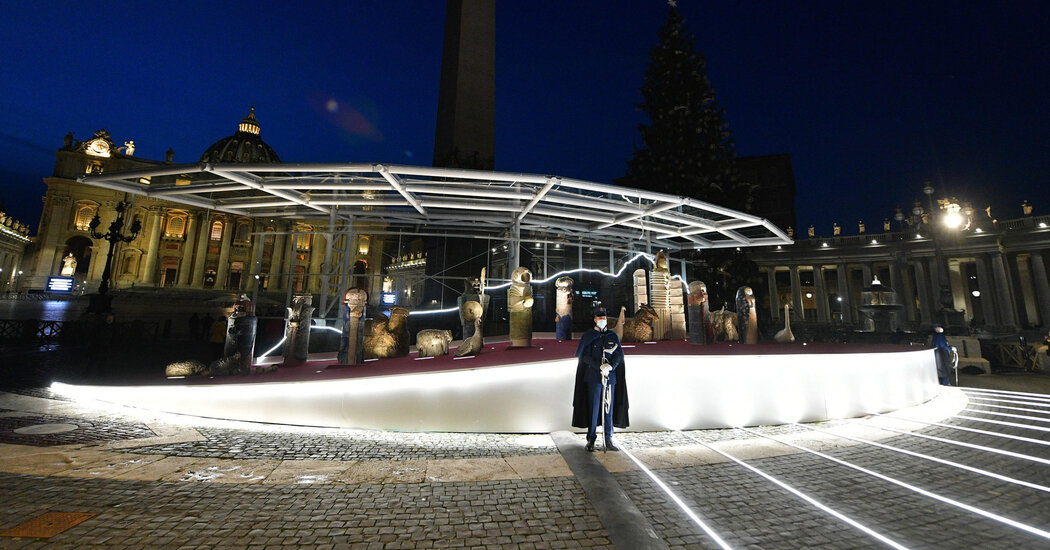 VATICAN CITY — A couple stood in front of the Vatican’s new Christmas Nativity scene in St. Peter’s Square, trying to understand exactly what they were looking at.

The three wise men, life-size and cylindrical, looked as if constructed from ceramic oil drums. Joseph and Mary, likewise torpedo-shaped, seemed like enormous, Bible-themed Weebles. Two enigmatic, totemic figures stood in the middle of the platform. One held a shield and a decorative spear and had for a head what appeared to be an overturned caldron, carved like an angry Halloween Jack-O-Lantern. The other wore an astronaut’s helmet and held the cratered moon in its hands.

“That one there?” Giorgio Banti, 71, asked his wife, Anita, as they gazed at the figures on Wednesday morning. She shrugged and read the informational poster. “First landing on the moon.”

Every year, the Vatican unveils a different Nativity scene, usually donated by an Italian town, to be displayed next to the ancient obelisk in the center of St. Peter’s Square. Last year’s artists sculpted the holy family, the Magi, angels and donkeys out of 720 tons of beach sand. In 2016, the display featured a Maltese fishing boat to evoke the travails of refugees. The one in 2017 highlighted works of mercy with a man visiting a prison cell and another burying a shrouded body, complete with a dangling pale arm.

This year the Vatican went in another direction, toward Castelli, a town in the Abruzzo region of central-eastern Italy known for centuries for its ceramics.

Between 1965 and 1975, students and teachers at a local art school there sought to revive that tradition by using ancient coiling techniques — rings of ceramic stacked in sections like marble columns — to create more than 50 Christmas-themed figures. They graced Rome’s Trajan Markets in 1970, and made it to Jerusalem in 1976. They survived earthquakes in 2009 and 2016, and a bad snowstorm in 2017.

Finally, this year, they made it to the big show, the “churchyard of Christianity,” as the crèche’s official description put it.

The reviews haven’t been so hot.

“It’s hideous,” said Ms. Banti, who looked at the ceramic menagerie of animals — chicks that looked like fallen meteorites, a camel made of ceramic cubes — with horror. “Why do they have that one with the horns?” she asked. “What is that? A turkey?”

That critique has been amplified by conservatives who see in the ceramic figures a further erosion of church traditions and customary images they hold dear.

“The Vatican’s Embarrassing SciFi Crèche,” read a headline in the conservative Catholic Herald, which like many conservative outlets and commentators, condemned the crèche. “One figure was often described as looking like Darth Vader,” wrote the article’s author, who then upped the nerd ante. “Though to me he looks more like a Sontaran from Doctor Who.”

Mr. Banti, a university professor, thought his wife and all the conservative critics were missing the point. He sought to provide more historical context.

“What history?” his wife interrupted.

“Would you let me finish?” he said. “I didn’t interrupt you.”

His wife walked off in a huff while he explained that he remembered this style of ceramics from his youth; that it was of a time and a place when the moon landings dominated the secular and religious imagination; and that these harmless figures did not deserve all the insults they were getting in the philistine Italian press, with some writers even suggesting something demonic could be afoot.

“They could be ugly, or it could be beautiful,” he said. “But it’s not satanic!”

“Satanic?” asked Annamaria Zeppa, a retired schoolteacher, who wore a beret and leaned on a single ski pole as she stood a few feet away. She was looking at a ceramic figure, maybe an angel, blowing a trumpet that looked like a fruit roll-up. “What does satanic have to do with it?”

For some traditionalist conservatives, everything. But they also tend to criticize Pope Francis for an overzealous spirit of inclusion that has opened the church’s doors to relativism and, more literally, fertility statues, which some conservatives threw in the Tiber River.

Francis, who has shown an interest in space exploration, also seems willing to push the crèche limits. Last year, he issued a document, “Admirable Signum,” in which he defended a more open-minded approach to the Nativity scene.

“Children — but adults too! — often love to add to the Nativity scene other figures that have no apparent connection with the Gospel accounts,” he wrote.

The late soccer player Maradona has been a fixture in the mangers of crèche-crazy Naples for decades. This year, that city’s artisans made a manger scene out of pizza dough.

Maradona and pizza is one thing. But 60s-era ceramics arts is apparently beyond the pale.

“Post-Modern Vatican Nativity Scene Provokes Wave of Criticism,” complained a headline in the National Catholic Register, another home of conservative dissent during the Francis pontificate. It bemoaned “20 modernistic ceramic objects,” including “a morbid, satanic-looking executioner.”

Art historians popular in the Vatican’s conservative circles also considered the crèche an unnecessary insult to the injury of a plague year.

“It has been a dark year and many have had their faith challenged,” the art historian Elizabeth Lev told Breitbart News’s Rome correspondent, who is also her husband. “Perhaps it would have been better to give them a symbol to rally round rather than an object of mockery.”

“The misshapen figures in the Nativity scene,” she continued, “lack all the grace, proportion, vulnerability, and luminosity that one looks for in the manger scene.”

Gazing at the crèche, Maria Letizia Panerai, 58, said the ceramic figures were just what she was looking for in a manger scene.

“I like it because these are not traditional times and we don’t need a traditional Nativity scene,” she said. “It’s representative of our anomalous age. It’s disconcerting, but this is a disconcerting year.”

“The only thing I don’t understand is that astronaut,” she added. “And that sort of monster behind him.”

“I see,” her mother, Argia, 84, agreed, squinting through sunglasses.

The daughter added that she saw nothing offensive about the crèche. The adjacent Slovenian spruce that dwarfed it in the square was another matter.

“What’s ugly is that tree,” she said.

The Vatican has yet to mount a vigorous defense of its tree, or its Nativity scene. (“The life-size ceramic statues hold a cultural heritage not immediately visible to the eye,” suggested Vatican News, its official news outlet.) And some Romans seemed to be coming around to it.

“It’s particular,” Marianna Sebastiani, 38, said, charitably, as she looked at Joseph and Mary flanking the baby Jesus, who will be cloaked until Christmas Eve with a red tarp. “The ones that leave me a little perplexed are the astronauts. But they made this when man went to the moon, so it has something to do with progress I think.”

Cristina Massari, 52, a guide in Rome, also said it wasn’t as bad as she had expected, given all the negative coverage. Plus, in the year of the epidemic, she appreciated that there was something otherworldly, but also empathetic, about a crèche that had endured natural disasters and scorn.

“It’s a Nativity scene that has had problems, like we’ve all had a lousy year,” she said. “If it made it, we can.”

No post-pandemic normal in France before autumn 2021