In Argentina, a Battle Over Gender-Inclusive Language in Classrooms 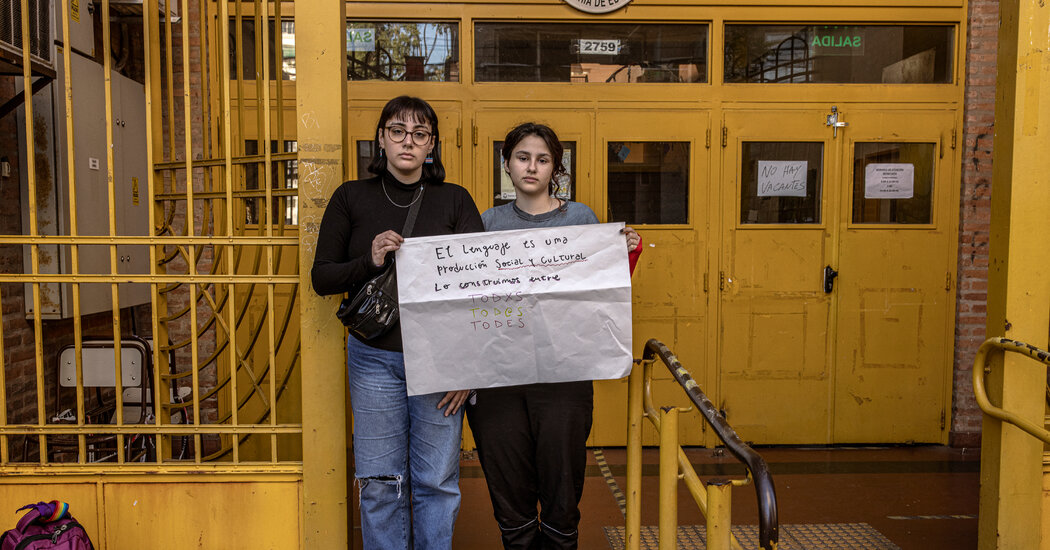 BUENOS AIRES — Instead of “amigos,” the Spanish word for “friends,” some Spanish speakers use “amigues.” In place of “todos,” or “all,” some write “todxs.” And some signs that would say “bienvenidos,” or “welcome,” now say “[email protected]”

The changes, which had been informally adopted by teachers in schools across Buenos Aires, were a deliberate effort to include people who don’t identify as male or female in a language where many words are categorized as either masculine or feminine.

Similar gender-neutral language is being increasingly introduced across Latin America, as well as in other languages, including English and French, by supporters who say it helps create a more inclusive society.

But to some Spanish speakers, including many academics and politicians, the changes degrade a language spoken by a half-billion people around the world.

In Argentina, the tension has shifted from a war of public opinion to a battle over policy.

The city government in Buenos Aires, the nation’s capital, last month banned teachers from using any gender-neutral words during class and in communications with parents. The city’s education minister said such language violated the rules of Spanish and stymied student’s reading comprehension.

The policy, among the first anywhere to specifically forbid the use of gender-neutral language, provoked a swift backlash. Argentina’s top education official criticized the rule and at least five organizations, a mix of gay rights and civil rights groups, have filed lawsuits seeking to overturn it.

Jaime Perczyk, Argentina’s education minister, compared the measure to prohibitions against left-handed writing under the fascist dictatorship of Francisco Franco in Spain. “They thought they were correcting something, but it goes much deeper,” he said, explaining that students use gender-neutral language as a tool to fight sexist attitudes prevalent in Argentine culture.

In Romance languages, including Spanish, French, Italian and Portuguese, the debate over gender-neutral terminology can be particularly fierce because all grammar is gendered.

Gender-neutral language has scandalized linguistic purists. The Royal Academy in Spain, considered by many as the gatekeeper of the Spanish language, described the use of “e,” “@,” and “X” — which are used in place of the “o” and “a” that often signify a word’s gender — as “alien to the morphology of Spanish” in a 2020 report.

The debate has also become part of an emerging culture war in Latin America. In December, Uruguay’s public education agency issued a memo limiting the use of inclusive language to be “in accordance with the rules of the Spanish language.”

Proposals to ban gender-neutral language in schools or government documents have been pushed in Peru, some states in Mexico, and in at least 34 municipalities and states in Brazil.

Gender-neutral language has also become an issue in October’s election in Brazil. The country’s president, Jair Bolsonaro, who is seeking a second term, told reporters in December during a discussion about education that “the gays’ gender-neutral language” is “screwing up our kids.”

In Colombia, Francia Márquez, the recently elected vice-president, was pilloried by conservative critics for using gender-neutral language during her campaign. “God save Colombia!” Margarita Restrepo, a legislator from a right-wing party, wrote in a tweet.

The debate is also playing out in the United States, where the gender-neutral term “Latinx” was added to a widely used dictionary in 2018. But even among Hispanic people, many have not heard of the term and few — mainly young college-educated women — use it, according to a survey in 2019 by the Pew Research Center.

The push for changes to Romance languages originated among feminists in at least the 1970s who challenged the use of the generic masculine, a grammatical rule in which the masculine form takes precedence when referring to a group of people if the group includes even one man. (In Spanish, five girls are “las niñas,” but once a boy joins, they become “los niños.”)

In France, instead of using “chers étudiants,” the masculine form of “dear students,” feminists promoted the use of double forms that included a feminine spelling, such as “chers étudiants et chères étudiantes,” said Heather Burnett, a linguist at France’s national research agency.

Today, a new wave of activists is going further. Many transgender people want to erase grammatical gender terms altogether. Instead of using “queridos alumnos y queridas alumnas” (“dear students” in male and female form), they prefer, for example, to use “querides alumnes.”

The movement around language, some experts say, is part of a broader challenge to the way society perceives gender.

“With nonbinary people, language is just the tip of the iceberg,” said Rodrigo Borba, a professor of applied linguistics at the Federal University of Rio de Janeiro in Brazil. “What they are questioning on a deeper, ideological level is that gender is not connected to your genitalia and that it does not only come in pairs.’’

Argentina is a surprising place for such a heated debate on gender-neutral language because the country has largely embraced transgender rights. In 2012, it became one the first countries in the world to pass a law allowing people to change their gender on official documents without requiring the intervention of a doctor or a mental health therapist.

Last year, the federal government adopted a measure requiring that 1 percent of all public sector jobs be set aside for transgender people. Those who identify as nonbinary are allowed to mark an “X” on official documents, rather than check off male or female. One of the president’s children is a nonbinary drag queen.

Even the ruling coalition — Front for All — has changed its logo to avoid using the masculine form of “todos” by replacing the second “o” with a sun.

In Buenos Aires, the city’s education minister, Soledad Acuña, said the new rule on inclusive language is not intended to be a ban. “Language itself is neither more nor less inclusive,’’ she said in an interview. “It all depends on how people use it.”

On the same day the rule was introduced, Ms. Acuña said, the ministry published several guides on how to be inclusive using traditional Spanish grammar. They suggest, for example, writing “los/as estudiantes” or using neutral words like “personas” or “people.”

But the guides have done little to mollify activists and some students who said the new language decree left them feeling ostracized.

“It just makes you feel really bad,’’ said Agostina Fernández Tirra, 17, who identifies as nonbinary and attends a public school in Buenos Aires. “They put us all in the same box — you are either female or male. Those of us in the middle, who are neither male nor female, it’s like they don’t even consider you.”

Some parents and teachers have cheered the rule. Gender-neutral language “is not even that inclusive,” said Vanina María Casali, the principal of a primary school in Palermo, an upscale Buenos Aires neighborhood. “In our school, there are kids with learning difficulties, and such language makes it even harder for them to learn.”

What influence, if any, gender-neutral language has on reading comprehension is unclear, said Florencia Salvarezza, a neuroscientist in Argentina who works on cognition, because little, if any research has been done on the subject.

But, Ms. Salvarezza added, it is plausible that gender-neutral language could complicate learning. “There is no way to create a syllable in Spanish with the ‘x’ or the ‘@’ because they are not vowels,’’ she said. “That might confuse young children.”

Still, advocates and others involved in Buenos Aires’s schools believe that despite the rule the use of gender-neutral language will continue to expand.

“You can’t prohibit something that’s already so in use,” says Alexandra Rodríguez, an after-school volunteer at a community center. “Language is something that’s always being modified. It’s alive because we are alive — and it will keep on changing.”