In Quebec, the Clash Over Caribou Heats Up 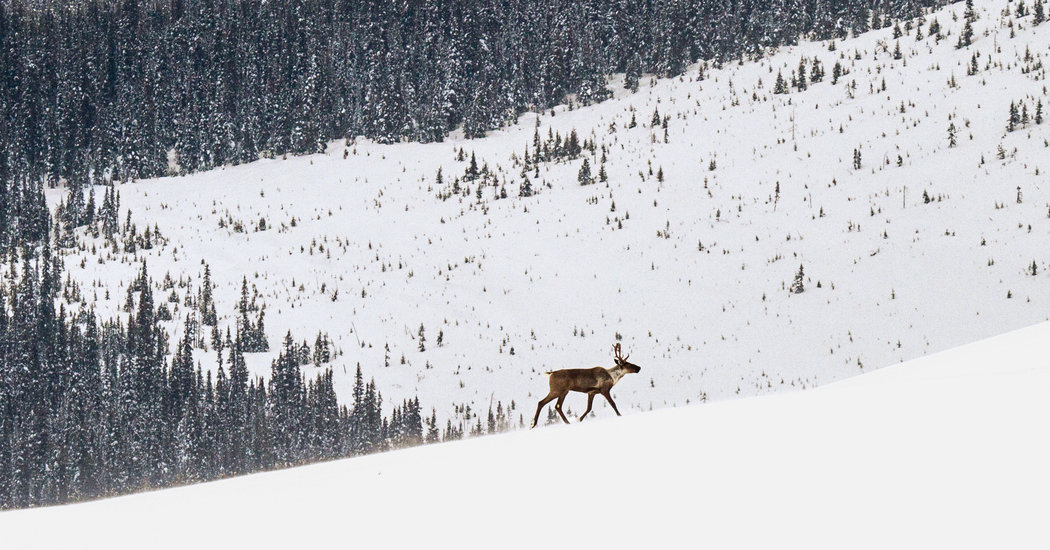 They are known as “gray ghosts,” roaming silently and in sparse herds through Canada’s boreal forests and mountains. They dash out of view almost as suddenly as they appear, for the few lucky enough to spot them. The animal is so beloved in Canada that it is embossed on the 25 cent coin.

But woodland and mountain caribou are threatened with extinction, and the Canadian government, which is legally responsible for protecting certain at-risk species, is moving to make sure the gray ghosts don’t come back to haunt it.

That was perhaps on the mind of Canada’s environment minister, Steven Guilbeault, this week. Mr. Guilbeault, a veteran environmentalist turned cabinet minister, and his office have been negotiating with Quebec for the development of a strategy to protect the caribou, which has been delayed several times. Conservation agreements with British Columbia and Ontario have also faced years of delay but are being negotiated, and Alberta reached a deal with the federal government in October 2020, releasing its first land-use plans under the agreement last week.

“In Quebec, there has been no progress,” Mr. Guilbeault told reporters at a news conference on Tuesday, as the government moves toward what he called the “uncharted territory” of threatening to use, for the first time, a “safety net” provision in the Species at Risk Act to implement protections on the land spanning the critical habitat of the caribou.

It has been 10 years since the federal government published its strategy to recover the caribou, requiring provinces to draft and implement plans within a specific time frame, to steward the critical habitats of these animals.

Chris Johnson, a professor of landscape conservation at the University of Northern British Columbia, said the amount of time and money invested into research and data collection aimed at protecting this iconic species in Canada is “really quite extraordinary, and these animals need it.”

“We often just don’t have the science to support recovery initiatives, at least with any confidence,” but the opposite is true for this species, Professor Johnson told me. “The science is quite clear.”

He said data suggests that caribou have a better shot at survival when their critical habitats are conserved at a threshold of 65 percent — in other words, when that portion of their landscape is not disturbed by human activity.

Land conservation policies put industry in the provinces, from oil fields in Alberta to mines and forestry in Quebec, in a situation where they are proverbially locking antlers with the caribou in a battle for land.

Quebec premier François Legault, at a news conference on Tuesday afternoon, said there ought to be a “balance” between saving the caribou and protecting jobs, and pointed to the work of an independent commission studying the caribou as a sign of the province’s progress on the matter.

“Because we won all our cases, I think they’re taking the lead to start all the processes that are necessary to put the safety net order in place,” said Alain Branchaud, the chapter’s director.

Further west, in Alberta, a lack of habitat conservation clears paths for wolves, predators of the caribou, which has in turn caused an overreliance on culling the wolves, said Carolyn Campbell, the conservation director at the Alberta Wilderness Association.

Wolf culls now happen in half of Alberta’s caribou ranges. “That’s a really drastic and kind of terrible reflection on our society’s choices, that we’re now scapegoating predators,” she said.

[Read: Hunting Moose in Canada to Save Caribou From Wolves]

[Read: Trapped on an Island With Wolves, the Only Way Out for These Caribou Was Up]

In British Columbia, scientists partnered with Indigenous communities, who secured a landmark conservation deal to protect just over 3,000 square miles of caribou habitat in 2020. Seven years earlier, the group of scientists and Indigenous conservationists had begun using what are considered short-term strategies, such as maternal penning to protect the baby caribou from predators, and helped grow a subpopulation of caribou to 101 in 2021, up from just 38 animals eight years earlier, according to a study published in late March.

Clayton Lamb, a postdoctoral researcher and co-author of the paper, said Indigenous guardians live at elevation with the caribou and look after them.

As the clock ticks, wolves hunt and caribou populations shrink, recovering these endangered animals will only become more expensive and difficult, Professor Johnson, of the University of Northern British Columbia, told me.

Vjosa Isai is a Canada news assistant at The New York Times. Follow her on Twitter at @lavjosa.