Indonesia’s Doctors Got Vaccinated with Sinovac, and Got Sick 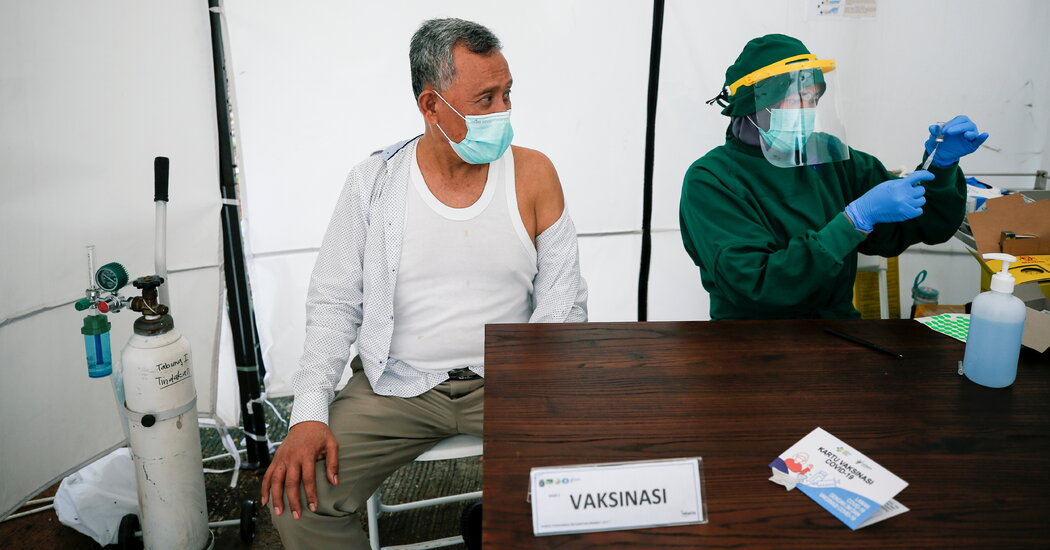 Dr. Suhendro Sastrowiwoho was fully vaccinated and eager to help this month as Indonesia faced a new and deadly wave of Delta variant coronavirus cases. His daughter and son-in-law, both trained as doctors, told him to rest. He was 74 years old, they warned, and the virus was evolving in unexpected ways.

On June 18, Dr. Suhendro died just days after testing positive for Covid-19. Like other frontline medical workers in his small town of Kudus, on the island of Java, he had received a double dose of Sinovac Biotech, the Chinese-made vaccine.

“His love was taking care of his patients and helping people,” said Angeline Dewi Suhendro, his daughter, whose husband is now also hospitalized with Covid. “We forbade him to practice because Covid cases were shooting up, but he insisted.”

While the West appears to be recovering from the worst of the coronavirus pandemic, some countries without access to plentiful vaccines are facing their most devastating outbreaks yet, as more contagious variants spread quickly. Other countries are discovering that certain vaccines may not be as effective as others in preventing infections caused by these variants.

Indonesia, the world’s fourth most populous country, is facing both problems at the same time. On Thursday, the country recorded more than 20,000 cases of Covid-19, the highest number since the pandemic began. Oxygen is again running out at hospitals in the capital, Jakarta, and the national percentage of positive Covid tests reached 14.6 percent this past week. By comparison, the weekly positivity rate in the United States is now 1.8 percent, according to the Centers for Disease Control and Prevention.

Since the pandemic began, 401 doctors in Indonesia have died, the risk mitigation team of the Indonesian Medical Association said on Friday. At least 20 of them were fully vaccinated with Sinovac. (The vaccination status of another 31 doctors who died between Feb. 1 and June 24 is still being investigated.)

In Kudus, where Dr. Suhendro practiced, 358 medical workers who were fully vaccinated with Sinovac tested positive during a two-week span, according to the risk mitigation team of the Indonesian Doctors Association.

A sprawling archipelago fettered by geography and government bureaucracy, Indonesia has vaccinated less than 5 percent of its population, despite having started inoculations in January. Of those who have been vaccinated, most received doses of Sinovac, which may be less effective against certain variants.

A study earlier this year of Sinovac’s efficacy among Indonesian medical workers indicated that the Chinese vaccine was largely successful in preventing hospitalization or death from infections. The Delta variant has not been studied as much.

The spread of the Delta variant in Kudus was as sudden as it was speedy. In mid-May, fewer than 30 people were hospitalized with Covid-19 in Kudus. Two weeks later, after people crisscrossed the country for a religious holiday, local hospitals in Kudus were overwhelmed with about 400 new Covid-19 patients a day.

One of those who fell sick was Dr. Ahmad Syaifuddin, the director of the Sunan Kudus Islamic Hospital and chairman of the local branch of the Indonesian Doctors Association. A genetic test revealed that he was infected with the Delta variant, and subsequent studies confirmed that nearly all of the positive cases in Kudus are of that strain, which was first identified in India.

While 90 percent of the vaccinated doctors who tested positive in Kudus were either asymptomatic or had very mild illness, according to Dr. Ahmad, an already stretched health care system has been pulled taut. With the threat of contagion so high, many local doctors who were exposed to the variant are in isolation, preventing them from working. There is not enough oxygen, nor enough trucks to transport the canisters to Kudus. Gravediggers are again hard at work. .

“Health workers are suffering from exhaustion,” said Dr. Ahmad, who is back to work after his bout of Covid.

Two nurses and a nutritionist in Kudus, all of whom were fully vaccinated, also died this month of Covid-19, said Dr. Adib Khumaidi, the chief of the Indonesian Medical Association’s risk mitigation team.

Dr. Adib said that the association is now discussing the possibility of administering to medical workers a third shot of another vaccine, such as Oxford-AstraZeneca. Some countries are supporting a mix-and-match scheme to boost immunity. Sinovac, which is produced by a Chinese pharmaceutical company and promoted by the Chinese government, has been criticized for a lack of transparency about its clinical trials.

But to properly vaccinate the country, Indonesia needs at least another 360 million doses. So far, Sinovac has been the only manufacturer to provide doses in such large quantities.

With the delays have come a virulent strain of vaccine hesitancy. Some Muslim clerics and community leaders are questioning whether the vaccines are worth it. They have also wondered whether Chinese-made doses are truly halal because of the high consumption of pork products in China. (The national Islamic clerics council has deemed the Sinovac vaccine “holy and halal.”)

For Indonesian health workers, struggling with overwhelmed emergency wards and worried about their own immunity, vaccine skepticism is one more headache at a time when they thought the country might be finally emerging from the pandemic.

“If you compare us with other countries,” said Dr. Adib, “it’s clear we will be far behind.”