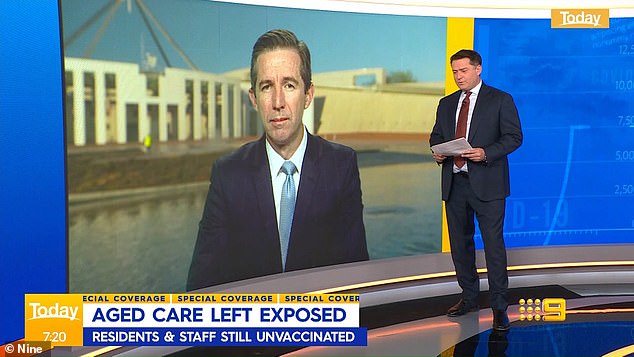 ‘The whole thing is a debacle’: Intense moment Karl Stefanovic grills Simon Birmingham over the abysmal vaccine roll-out – and how Covid made it into Melbourne nursing homes AGAIN

Karl Stefanovic has clashed with Liberal Senator Simon Birmingham over the bungled aged-care crisis in Melbourne that saw infected staff working alongside the elderly.

The Finance Minister appeared on Today on Tuesday morning where Stefanovic labelled the Morrison government’s handling of the vaccine roll-out a ‘debacle’ and that its left vulnerable Australians in the firing line of the latest outbreak.

‘You allowed aged-care staff to work in multiple aged-care homes before everyone – including staff, and residents – were fully vaccinated. How is that not a let down?’ the morning show host asked.

‘The whole thing is a debacle.’ 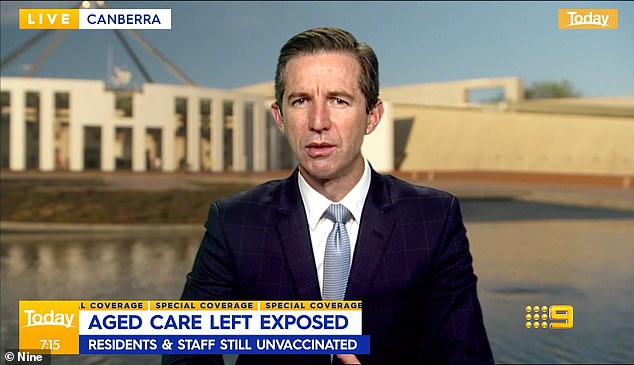 Birmingham defended the decision to allow people to continue to work at healthcare facilities unvaccinated, saying because there were ‘no known COVID transmission in the community we allowed staff to resume normal working patterns.’

When asked if they now regretted the decision to allow staff to work unvaccinated and across multiple aged-care facilities he said no, despite two workers and one patient from the Arcare Maidstone testing positive.

When Birmingham couldn’t identify how many aged-care workers had been vaccinated, Stefanovic slammed the lack of a nationalised system and accused the Liberal Party of already renegging on promises from the budget.

‘You have staff working at multiple facilities. You have to know how many were vaccinated given someone might get COVID and go to another facility? I mean it’s just – it makes perfect sense,’ he said.

‘You have to know how many have been vaccinated. You don’t know because there’s not a database.’

‘You spent $18billion on the budget in aged-care. There was much hoopla around that. You paraded about that and here we have multiple people who have Covid inside aged-care facilities and staff who have been working without being vaccinated. We have residents who haven’t been vaccinated.’

‘The whole thing is a debacle.’

COVID-19: Coronavirus variants given new names by the WHO under new system – here’s the full list | World News