Is Mexico’s Recall Election “Democracy of the Highest Order”? 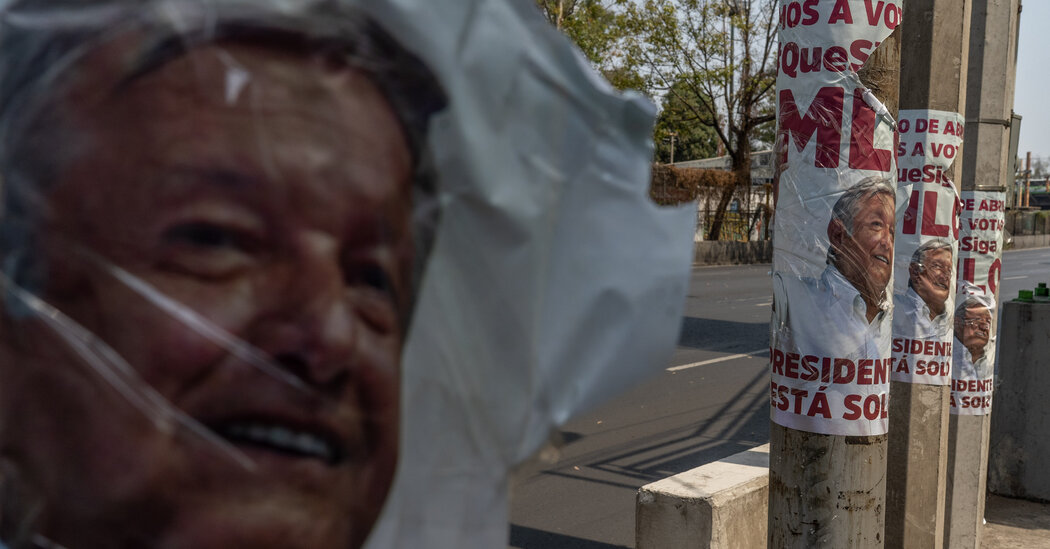 MEXICO CITY — Strolling through Mexico’s capital these days, it would be easy to assume the country’s president is at imminent risk of losing his job.

City streets are littered with signs, fliers and billboards urging Mexicans to vote on whether to remove President Andrés Manuel López Obrador from office in a recall election this Sunday.

Only it isn’t the opposition telling people to rush to the polls. It’s the president’s loyalists.

“Support President López Obrador,” reads one flier. “If you don’t participate, the corrupt ones will take away the scholarships, assistance, and pensions that we receive today.”

For the better part of a century, Mexican presidents have served out six-year terms without fail, whether or not they were fairly elected — or came to be despised by much of the population. The recall election, proposed by Mr. López Obrador and the first of its kind in Mexico, has the potential to upend the country’s political system, by giving citizens a powerful new avenue to hold their leaders accountable.

On Sunday, voters will be asked to decide whether Mr. López Obrador “should have his mandate revoked due to loss of confidence,” or “continue in the presidency of the Republic until his term ends.” To become binding, 40 percent of the electorate must participate.

The one wrinkle is that the vote’s most enthusiastic promoter — and the person most keen on putting the president’s well-established popularity to the test — has been the president himself. Opposition leaders have told their followers to boycott the exercise, and analysts believe turnout could be too low for the results to even count.

So, while Mr. López Obrador has called the recall “an exercise in democracy of the highest order,” many fear it could amount to something far less significant: a marketing tool aimed mainly at bolstering the president’s claim to power.

“This is supposed to be a mechanism for civic control of power, but it has become instead an instrument of political propaganda,” said Carlos Bravo Regidor, a political analyst and critic of the administration. The governing party, Mr. Bravo Regidor said, “wants this to be a show of force, of muscle, and capacity to bring people into the streets and make explicit their support for López Obrador.”

On a balmy Monday in Mexico City, volunteers in the president’s camp fanned out across a residential neighborhood armed with fliers and wide grins, cheerfully advertising nearby polling stations and telling anyone who would listen to go vote in the recall.

Allan Pozos, one of the group’s leaders, said he hoped the exercise would “set a precedent” so future leaders could be kicked out if needed. This time, though, he just wants the president to know he’s loved.

“It’s to show Andrés Manuel that he has the strong backing of the people,” said Mr. Pozos. “Andrés often feels alone, because he has to go against an entire system and doesn’t have support.”

Such a show of support could not come at a better time for the president, who has passed the midpoint of his term while struggling to deliver on key campaign promises that swept him into office in a landslide victory in 2018. He vowed a “transformation” of the country that would drive down poverty, jump start the economy and tackle endemic violence at its roots.

But after a pandemic and a global recession, poverty rates remain stubbornly high, economic growth is anemic and homicides are still hovering near record levels.

But Mr. López Obrador has remained very popular, with more than half of Mexicans approving of his performance, polls show. His government has sought to improve the lot of the poor, raising the minimum wage four times and boosting welfare spending.

Mr. López Obrador has also won points with symbolic gestures, like turning the presidential mansion into a museum open to the public, and flying commercial, even when visiting the United States.

His high favor with voters is also a tribute, supporters and critics agree, to his relentless broadcasting of an official narrative in which he portrays himself as a lone warrior for the people, going up against a corrupt establishment.

“The results have been below the expectations of the government itself,” Jorge Zepeda Patterson, a prominent Mexican columnist who has supported the president, said, referring to Mr. López Obrador’s achievements during his tenure.

“Polarization is very profitable politically, especially if you don’t have results,” said Mr. Zepeda Patterson, adding, “at least you can build the narrative that you are fighting.”

The main risk of the recall for the president is the possibility that large swaths of the country just ignore the exercise altogether, especially as it takes place on Palm Sunday. By law, for the vote to become binding, at least 37 million Mexicans need to participate in it — significantly more than the number of people who voted for the president in the 2018 elections that swept him into office in a landslide.

But Mr. López Obrador has already identified a scapegoat in case of low turnout: the country’s electoral watchdog.

For months, he has been attacking the National Electoral Institute over what he sees as a failure to dedicate enough resources to advertising and administering the recall vote.

“They should have promoted the referendum from the start, not acted dishonestly, keeping silent, not promoting the vote so that people wouldn’t know about it, putting polling booths as far away as possible,” the president said at a recent news conference, referring to the electoral institute. “They’re openly against us, against me.”

The institute asked the federal government for more money to oversee the contest, to little avail. With only about half the budget it said it needed, the watchdog installed about a third of the polling stations it would in a normal election.

Lorenzo Córdova, the leader of the electoral institute, known by its Spanish acronym I.N.E., says he’s being set up to fail.

“It’s not just the president,” Mr. Córdova said, “there is an orchestrated, systematic and well designed campaign to discredit the I.N.E.” The point, he said, is to “damage the referee, and eventually pave the way for its political capture.”

The nation’s Supreme Court has said political parties cannot advertise the recall, and yet, Mr. López Obrador’s face has cropped up on signs around the country.

Mr. Córdova says the electoral institute has not determined who is paying for all of the ads, but said there are at least twice as many of them in states where the president’s party will compete in elections for governor in June.

There are, of course, strategic benefits that could come from asking the country to weigh in on whether or not they like the president at this particular moment. Mr. López Obrador founded his political party and has an obvious interest in doing everything possible to ensure its victory in general elections to replace him in 2024.

The voting patterns in the recall will tell the president where his side’s weaknesses are — and which of the potential candidates for president can get people to the polls.

“It’s a kind of experiment, a rehearsal,” said Blanca Heredia, a professor at CIDE, a Mexico City research institution. “Looking ahead to 2024, he can measure the capacity of his operators to mobilize the vote.”

Whatever happens on Sunday, for many in Mexico, it’s hard to see how the country’s first-ever presidential recall will seriously damage this president.

“Andrés Manuel has this thing where even when he loses, he wins,” said Ms. Heredia. “He always has a way of turning a defeat into a triumph.”