By Oliver Holmes in Jerusalem, Bethan McKernan and Julian Borger in Washington On May 16, 2021 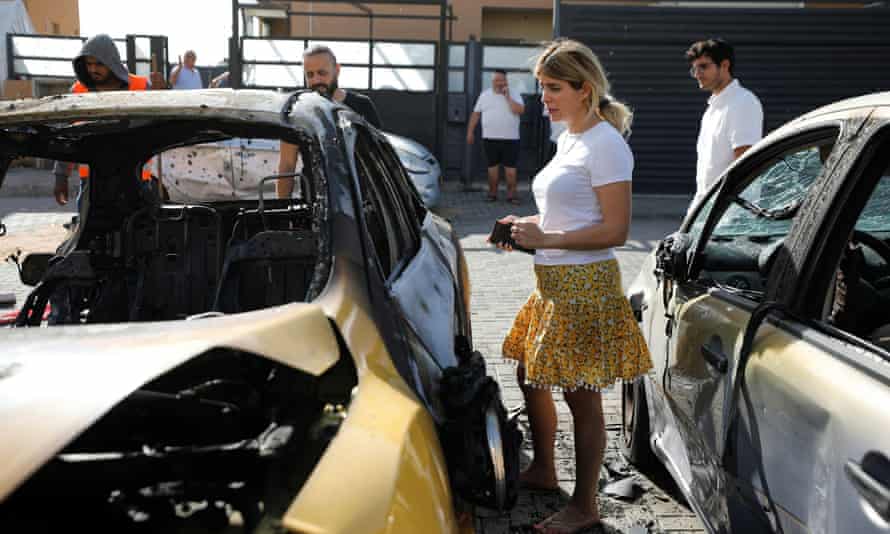 The eruption of the Israeli-Palestinian conflict is heading for an “uncontainable security and humanitarian crisis”, the UN secretary general has warned after a day of significant escalation with 42 Palestinians killed by airstrikes in Gaza.

The death toll made it the deadliest single attack since fighting broke out between Israel and the Palestinian militant group Hamas a week ago. Fifty Palestinians were injured. Meanwhile, air-raid sirens sounded for the seventh consecutive day across southern Israel as Hamas and other militant groups in Gaza launched more rocket attacks into the country – and reaching further – than in the entirety of the 2014 war.

As the UN security council met in a specially convened session, foreign ministers and ambassadors called for a ceasefire and for both sides to respect international humanitarian law, but there was no sign of even a temporary truce to allow medics in Gaza to recover people – alive and dead – from under collapsed buildings.

“The fighting risks dragging Israelis and Palestinians into a spiral of violence with devastating consequences for both communities and for the entire region,” António Guterres told the council. “It has the potential to unleash an uncontainable security and humanitarian crisis and to further foster extremism, not only in the occupied Palestinian territory and Israel, but in the region as a whole.”

The UN coordinator for the Middle East peace process, Tor Wennesland, summed up the week’s dark balance sheet: 950 Israeli airstrikes on Gaza have killed 181 Palestinians, including 52 children. Over the same period, more than 2,900 rockets fired by Hamas and Palestinian Islamic Jihad killed 10 people, including two children.

Wennesland said 40 schools and four hospitals were completely or partially destroyed in Gaza and 18 buildings including four high-rise towers, including one housing several press offices, had been razed. The Norwegian diplomat also warned of the impact of loss of power supply inside the Palestinian enclave.

“The lack of electricity has resulted in a decrease of clean water and sewage treatment affecting hundreds of thousands,” he said, adding that the Gaza health system “will likely be unable to meet the needs of those injured during the violence”, particularly as hospitals face potential electricity shortages.

Inside Gaza, rescuers raced to pull survivors and bodies from the rubble of three collapsed buildings on Sunday morning. According to photographs circulated by residents and journalists, the Israeli airstrikes left a crater that blocked one of the main roads leading to Shifa, the largest hospital in the Strip.

In the burst of airstrikes early on Sunday, Israel also targeted the home of Yehya al-Sinwar, the most senior Hamas official in Gaza, who since 2017 has headed the group’s political and military wings, Hamas’s TV station said. On Saturday, Israeli airstrikes killed eight young cousins who had gathered to celebrate Eid with their mothers.

The Israeli prime minister, Benjamin Netanyahu, went on US television on Sunday morning to insist his forces were doing all they could to minimise civilian casualties.

“The reason we have these casualties is because Hamas is criminally attacking us from civilian neighbourhoods from schools, from homes, from office buildings,” he told CBS News’s Face the Nation programme. He would not give a justification for targeting the 12-storey press building in Gaza on air, but later claimed Hamas had an intelligence unit inside. Associated Press and other news organisations using the building said they had seen no evidence of Hamas presence.

The US ambassador to the UN, Linda Thomas-Greenfield, made comments that were similar to European security council members, calling for an end to Palestinian rocket attacks and for both sides to abide by international law.

“We also urge all parties to protect medical and other humanitarian facilities, as well as journalists and media organisations. We are particularly concerned about protecting UN facilities as civilians seek shelter in about two dozen of them,” she said.

Thomas-Greenfield called for an end to evictions, demolitions and settlement construction in East Jerusalem and the rest of the West Bank. While the content of the US remarks were little different in tone from US allies, the Biden White House had, throughout the week, blocked the US from joining a common security council statement.

In his own remarks, Biden has emphasised Israel’s right to self-defence, though in a phone call with Netanyahu on Saturday the president also “raised concerns about the safety and security of journalists”, following the bombing of the Gaza press building.

At the UN on Sunday, the Palestinian foreign minister, Riyad al-Maliki, took aim at Biden’s position.

“Remember that each time Israel hears a foreign leader speak of its right to defend itself, it is further emboldened to continue murdering entire families in their sleep,” Maliki told the security council.

Hady Amr, the US deputy assistant secretary for Israeli and Palestinian affairs, is in the region talking to Israeli and Palestinian leaders. Israeli press accounts cited officials as saying that, so far, Amr was not conveying an unequivocal US demand for a ceasefire or laying down a timetable for a ceasefire, but was also warning against escalation.