Israel’s New Leader Tilts Right in Settler Deal, a Hint at His Approach 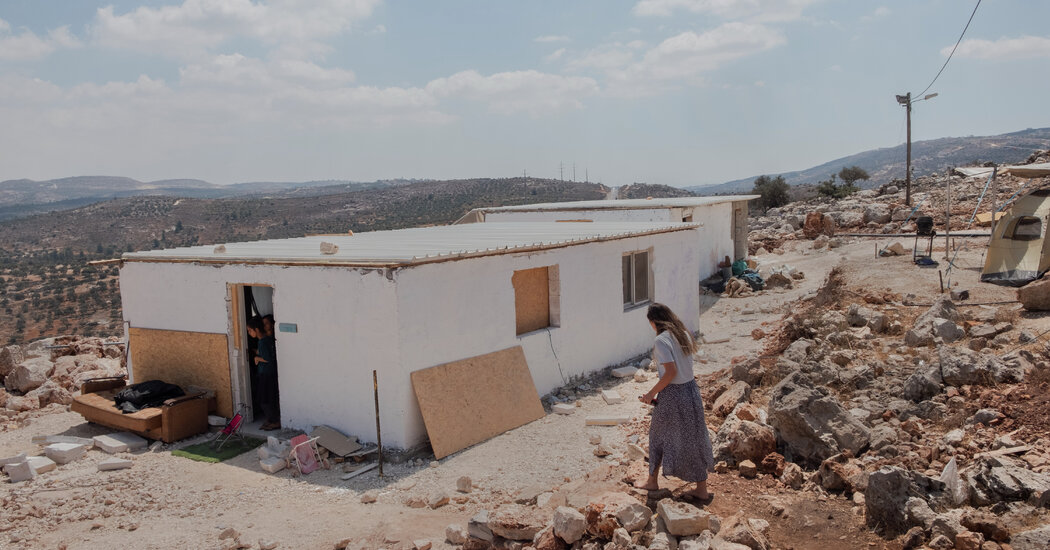 JERUSALEM — Not a lot binds the new Israeli government. It’s an unwieldy and incoherent coalition of right-wingers, leftists, centrists and Islamists that many fear won’t survive more than a few months, let alone years.

But a pair of recent decisions, both related to the most divisive issue in Israel, the Palestinian conflict, show how the government seems to have found, so far at least, a way to maneuver through a maze of sensitive issues while avoiding collapse: by tilting to the right, while giving its leftist and Arab members just enough concessions to justify staying in the alliance.

The latest example was how it dealt with a new, unauthorized Jewish settlement in the occupied West Bank that has set off daily protests by local Palestinians. Pull it down, and Naftali Bennett, the hard-right prime minister, risked angering his pro-settler base. Let it remain, and he might have prompted his left-wing and Islamist allies to reconsider their involvement in the coalition.

On Friday, his government finalized a response that held the coalition together, even as it angered its leftist flank and did nothing for the Palestinians living nearby. The settlers will be evicted for now, the government said in a statement, but their homes will remain and soldiers will be stationed on the site to protect it.

The government will also investigate the land’s ownership, the statement said. If it decides some or all of the land belongs to the Israeli state, rejecting ownership claims by local Palestinian farmers, the government will then permit construction of a religious school on the site, allowing settlers to return.

It was a formula that mimicked the government’s approach to a far-right march through Palestinian areas of Jerusalem, organized in the final days of former Prime Minister Benjamin Netanyahu’s term. The march was held on government’s second full day in office.

The coalition gave it the go-ahead, placating its hard-right and centrist constituents while outraging its leftist and Islamist supporters. But it made a concession to the latter by changing the route of the march away from the most provocative areas.

The government was formed on June 13 with the one unifying goal of forcing Mr. Netanyahu, Israel’s longest-serving prime minister, from office after 15 years in power, including the last 12 in a single stretch. But beyond that, the coalition’s eight parties agree on little, and they have little room for maneuver if they disagree.

In the parliamentary vote that gave them power, they fell short of an overall majority, beating Mr. Netanyahu’s bloc by just one vote.

To avoid falling out, the government’s leading figures, Mr. Bennett and his centrist foreign minister, Yair Lapid, initially promised to avoid hot-button topics that would cause immediate divisions, such as anything related to the Palestinian conflict.

To an extent, they have managed to fulfill that pledge by pursuing less contentious issues such as presenting a united front in the response to a rise in coronavirus cases last week, working on a new budget and announcing a high-level inquiry into a disaster at a religious site in April that killed 45 people.

But the Palestinian question is so tightly woven into the day-to-day business of an Israeli government that it has proved impossible to ignore.

On its very first day in office, the government had to decide about the far-right march, which opponents feared might set off another round of fighting with militants in Gaza. In its second week, it was already locked in a debate over how to deal with the new settlement in the West Bank, named Evyatar by its founders.

Another crisis looms over an upcoming parliamentary vote to extend a 2003 law that effectively bars granting citizenship to Palestinians who marry Israeli citizens.

To the coalition’s right-wing members, it is an essential security measure to protect Israel from militants they fear could seek to infiltrate the country by marrying an Israeli citizen. But to leftists and Arab members, it is discrimination aimed at excluding Palestinians.

The government’s decisions on the march and the settlement have given far greater satisfaction to the Israeli right than the left.

“There is only one side that is swallowing frogs,” said Shira Efron, an analyst in Tel Aviv for the Israel Policy Forum, a New York-based research group. “And that is the left.”

Ester Alosh, a spokeswoman for the Shomron Regional Council, which represents settlers in the area surrounding Evyatar, said her camp did not get everything it had hoped for.

“We are a little bit happy and a little bit sad; it’s not exactly what we wanted,” she said. “But on the other hand, if they stick to their side of the agreement, then there is a good chance this place will stay in Israeli hands.”

But to the Israeli left, including those within the coalition, the deal gives little cause for optimism. Instead of removing the settlement, it potentially only temporarily removes the settlers themselves, and it gives state backing to the site’s eventual legalization.

“It’s terrible — it’s something that I cannot understand,” said Mossi Raz, a lawmaker from Meretz, a leftist coalition party. “It’s a white flag from the government, and it makes a lot of problems for the future because the settlers will do it again and again. They’ve got what they want — even more than they expected.”

And for the Palestinian farmers who claim the land, and who have not been able to work it since the settlers arrived in early May, the announcement simply proves what they have always maintained: that any Israeli government, regardless of its political hue, works with the same aim of gradually taking over more Palestinian land.

“If the army takes it over and builds a synagogue, or uses it as a military camp, or keeps it as a settlement, my land is still stolen,” said Mohammed Khabeisa, 68, who said he planted an olive grove on the site of the settlement in the 1960s and farmed the land until he was forced off the site in May. “I ask you, what difference does it make?”

Mr. Khabeisa does not have a document to conclusively prove his ownership, but the Israeli government has acknowledged that his and four other Palestinian families paid land tax on a plot on or near the hill in the 1930s, without specifying exactly where.

The deal to temporarily evict the settlers may be “a compromise to avoid a crisis within the government,” said Khaled Elgindy, an analyst on Palestinian-Israeli affairs at the Middle East Institute, a Washington-based research group. “It’s not a compromise with the Palestinian community that is most affected.”

The hard-right faction of the government says it will not change the wording of the text, while Raam, the Islamist party in the coalition, says it will not sign it in its current form. Arab families affected by the law said they would regard Raam as traitors if they backed the legislation’s extension.

For now, most analysts say it is not likely that any faction will drop out of the coalition in the immediate future. If they did, however, that could provide an opening for Mr. Netanyahu to return to power.

“I just don’t think that, at this stage, any of the parties would risk destabilizing this coalition over something — anything, to be honest,” said Dr. Efron.

For a party like Raam, which might lose all its seats at an election, “it’s like a binary choice,” she added. “This has to be a success story for them, or they cease to be.”

Reporting was contributed by Irit Pazner Garshowitz from Jerusalem; Gabby Sobelman from Rehovot, Israel; and Asmaa al-Omar from Beirut, Lebanon.