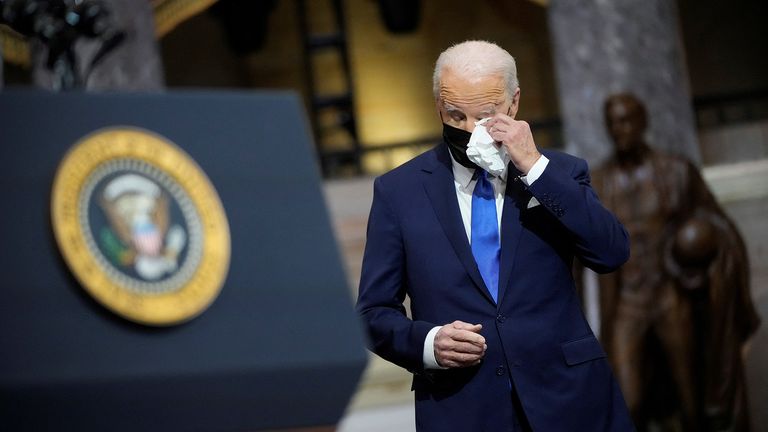 US inflation has hit 7% for the first time in 40 years in the latest sign of the cost of living pressures squeezing consumers across the globe.

Food and fuel prices have also been climbing sharply, adding to political pressure on President Joe Biden as well as America’s central bank, the Federal Reserve, to take action.

The year-on-year inflation rate published by the US bureau labour statistics (BLS) was up from 6.8% in November – which was already the highest since June 1982 when Ronald Reagan was in office.

Mr Biden responded to the latest figures by saying that there had been progress in slowing the acceleration of inflation but acknowledging that there was “more work to do with price increases still too high”.

The data also added to expectations that the Fed will start raising interest rates as early as March – after Fed chair Jerome Powell said that it stood ready to take action to prevent high inflation from becoming “entrenched”.

Prices have been soaring as Americans ramp up spending at a time when the world’s biggest economy is grappling with labour and raw materials as well as wider supply chain hold-ups.

The inflation surge is effectively wiping out the impact of healthy pay increases that are being enjoyed by many US workers.

Polls show that cost of living growth is replacing even the coronavirus as a public concern.

Many economists think the Fed could hike interest rates as many as four times this year, adding to mortgage and other loan repayment costs and potentially slowing the economy.

Anxiety over central bank action has prompted turbulence in US stock markets at the start of this year, particularly in tech stocks seen as more attractive investments in a low rate environment.

But markets reacted calmly to the latest prices data which was in line with expectations.

The figures come a day after the Organisation for Economic Cooperation and Development (OECD) said inflation across its 38 member countries had hit a 25-year high in November.

Meanwhile, the World Bank warned of a “pronounced slowdown” in global growth with inflation among the key factors, as well as new variants of COVID-19.

In Britain, latest figures showed price growth at a 10-year high of 5.1%, with the Bank of England predicting it could rise to 6% by the spring as energy prices soar.

The Office for National Statistics is due to publish UK inflation figures for December next week.

Prince Andrew sex assault allegations – What are his options after he fails to get US judge to dismiss accuser Virginia Giuffre’s case? | US News