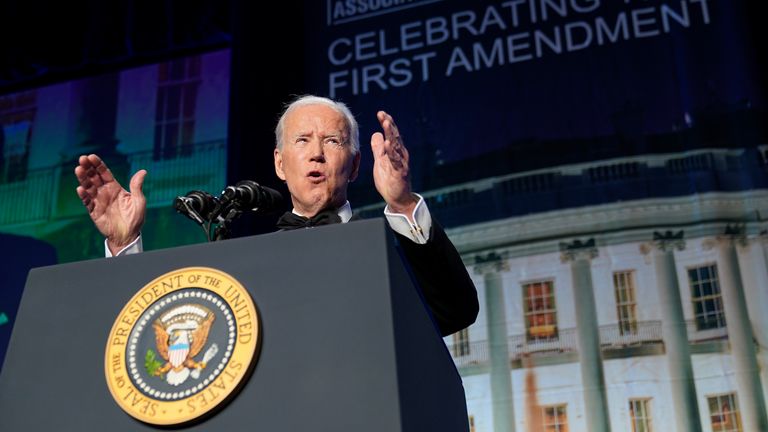 Joe Biden has mocked his own low approval ratings and had a dig at the “horrible plague” of predecessor Donald Trump at the annual White House Correspondents’ Association Dinner.

The US president resumed the tradition of speaking at the Washington event after it was cancelled for two years due to the COVID-19 pandemic and boycotted by Mr Trump during his presidency.

But amid the jokes, Mr Biden also struck a serious note as he praised journalists covering the Russian invasion of Ukraine and stressed the importance of a free press in the the face of the “poison” of disinformation.

Journalists, media executives, White House officials and celebrities, including Kim Kardashian, Brooke Shields and Drew Barrymore, were among those to attend the charity dinner, which was compered by comedian Trevor Noah of The Daily Show.

Talk-show host James Corden was among those to appear in taped sketches.

Poking fun at his own poor showing in the polls and his media critics, Mr Biden said: “I’m really excited to be here tonight with the only group of Americans with a lower approval rating than I have.”

He also said it was understandable no president had attended the event since Barack Obama in 2016.

“We had a horrible plague followed by two years of COVID,” he joked.

In a further sideswipe at Mr Trump, Mr Biden said: “Just imagine if my predecessor came to this dinner this year. Now that would really have been a real coup.”

This was a jibe at Mr Trump’s attempt to overturn the election he lost to Mr Biden in 2020.

The president also took aim at the Fox News hosts in attendance – many of whom have voiced scepticism about coronavirus vaccines on air.

He said: “I know there are a lot of questions about whether we should gather here tonight because of COVID.

“Well, we’re here to show the country that we’re getting through this pandemic. Plus, everyone has to prove they are fully vaccinated and boosted.

While most of his speech was light-hearted, his remarks took a more serious tone when he thanked journalists for their courage in covering Ukraine and beyond and highlighted the vital role journalism played in a democracy.

He said: “A poison is running through our democracy… with disinformation massively on the rise.

“You, the free press, matter more than you ever did in the last century. I really mean it.

“You are the guardians of the truth.”

Mr Biden also could not resist in his closing remarks a dig at the Russian leader Vladmir Putin, who has forcibly cracked down on dissent since attacking Ukraine.

Referring to the dinner’s comic host, Mr Biden said: “Trevor, the really good news is, now you get to roast the president of the United States.

“And unlike in Moscow, you won’t go to jail.”

She Promised to Empower Women. Will Honduras’s President Succeed?