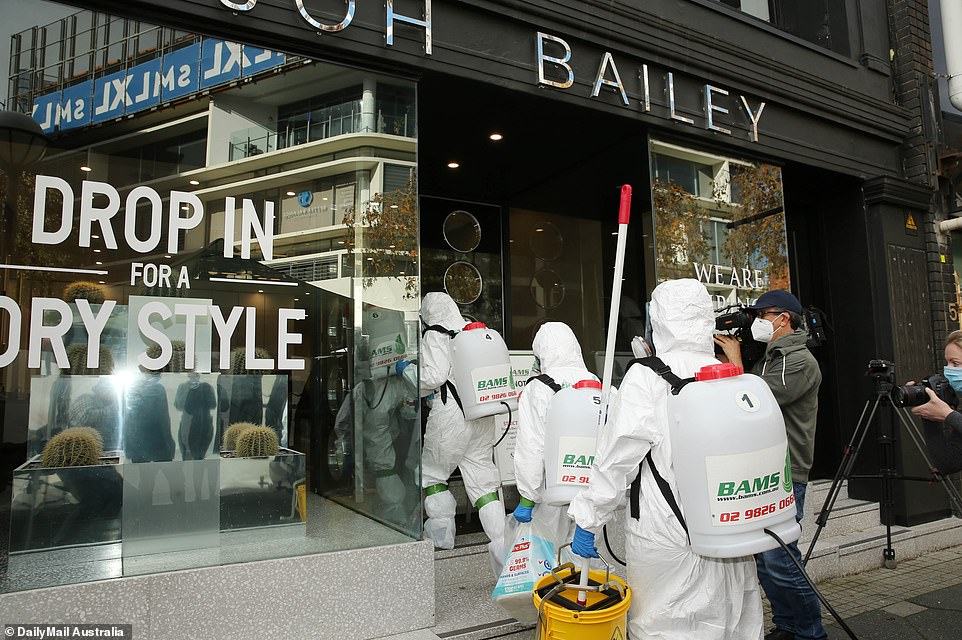 Famed Sydney salon boss Joh Bailey warns more than 1,000 customers, staff and their close contacts at his flagship outlet in Double Bay have been exposed to coronavirus by an infected hairdresser.

The hairdresser, who lives in western Sydney, worked three consecutive nine-hour shifts at the salon from Thursday June 17 to Saturday June 19.

‘We have over 1,000 customers, staff [and their close contacts] this has affected… who have to isolate,’ he said.

The infected hairdresser is one of two super-spreader events in Sydney sending thousands of residents into isolation after being exposed to the highly-infectious Indian Delta variant.

Famed Sydney salon boss Joh Bailey warns more than 1,000 customers and staff at his flagship outlet in Double Bay have been exposed to coronavirus by an infected hairdresser 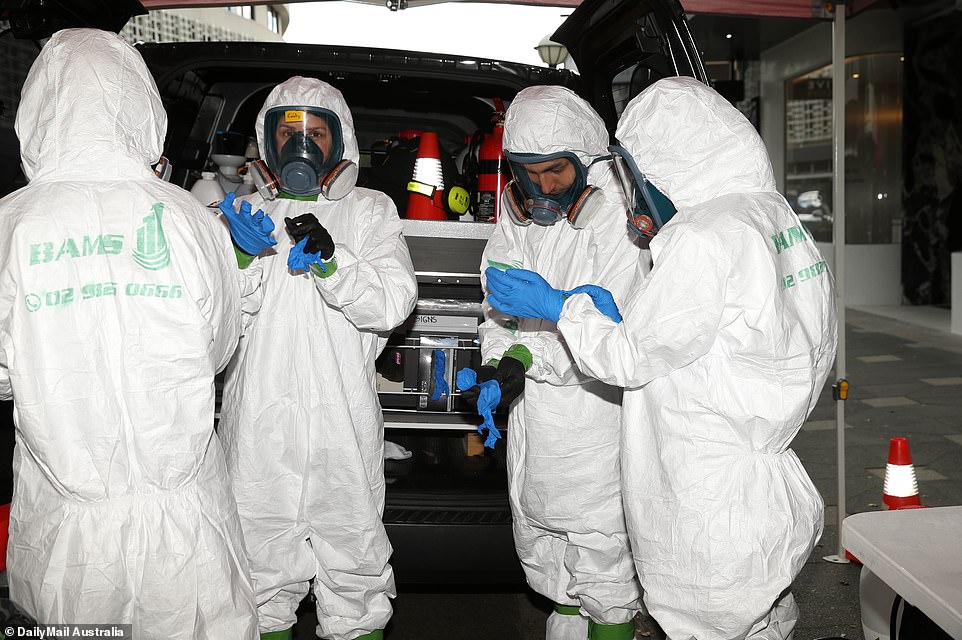 The hairdresser, who lives in western Sydney, worked three consecutive nine-hour shifts at the salon from Thursday June 17 to Saturday June 19 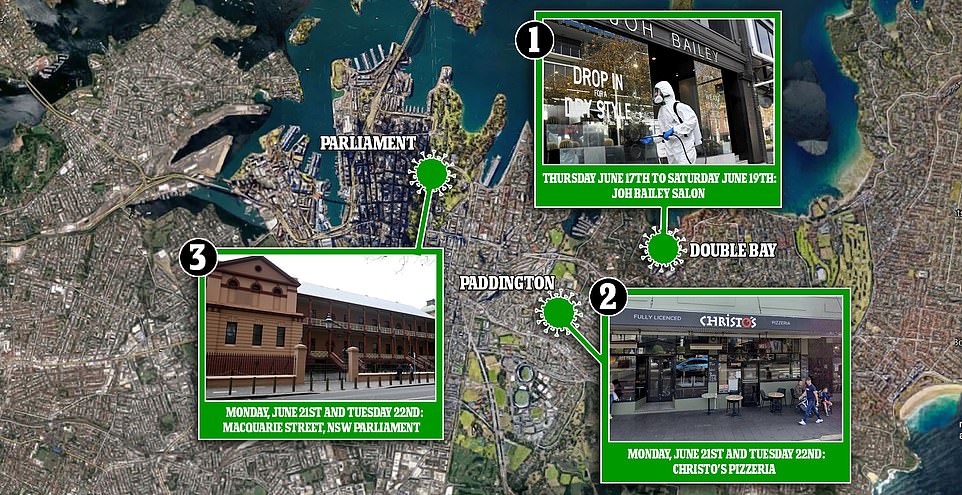 The other event was a dinner on Monday night at Christo’s Pizzeria in the city’s trendy inner-eastern suburb of Paddington where NSW Agriculture Minister Adam Marshall was infected by another customer, and then attended a National Party Budget dinner on Tuesday night in Parliament House.

As Joh Bailey’s salon underwent a deep clean on Thursday – which he described as scenes resembling the Met Gala – Mr Bailey said the focus was on staff and customer health.

‘We are allowed to re-open, of course, but because all or most of our staff have to isolate – that’s the problem we have right now.’

Mr Bailey is one of Australia’s most sought-after hairdressers who has been at the top of his game for three decades.

His client list that reads like a who’s-who of TV stars, socialites, politicians, business elite – and once even gave Princess Diana a makeover on her seminal 1983 Australian tour.

NSW Health officials contacted the salon on Wednesday morning to alert it to the positive case, and management closed the doors immediately.

The hairdresser, who commuted from the city’s west for work each morning, has since infected three customers – with hundreds of others in isolation with fears it could lead to a massive outbreak.

‘We wish to express our deepest gratitude to NSW Health for their incredible efficiency and support during the ongoing Covid-19 NSW outbreak,’ Mr Bailey wrote on Instagram. 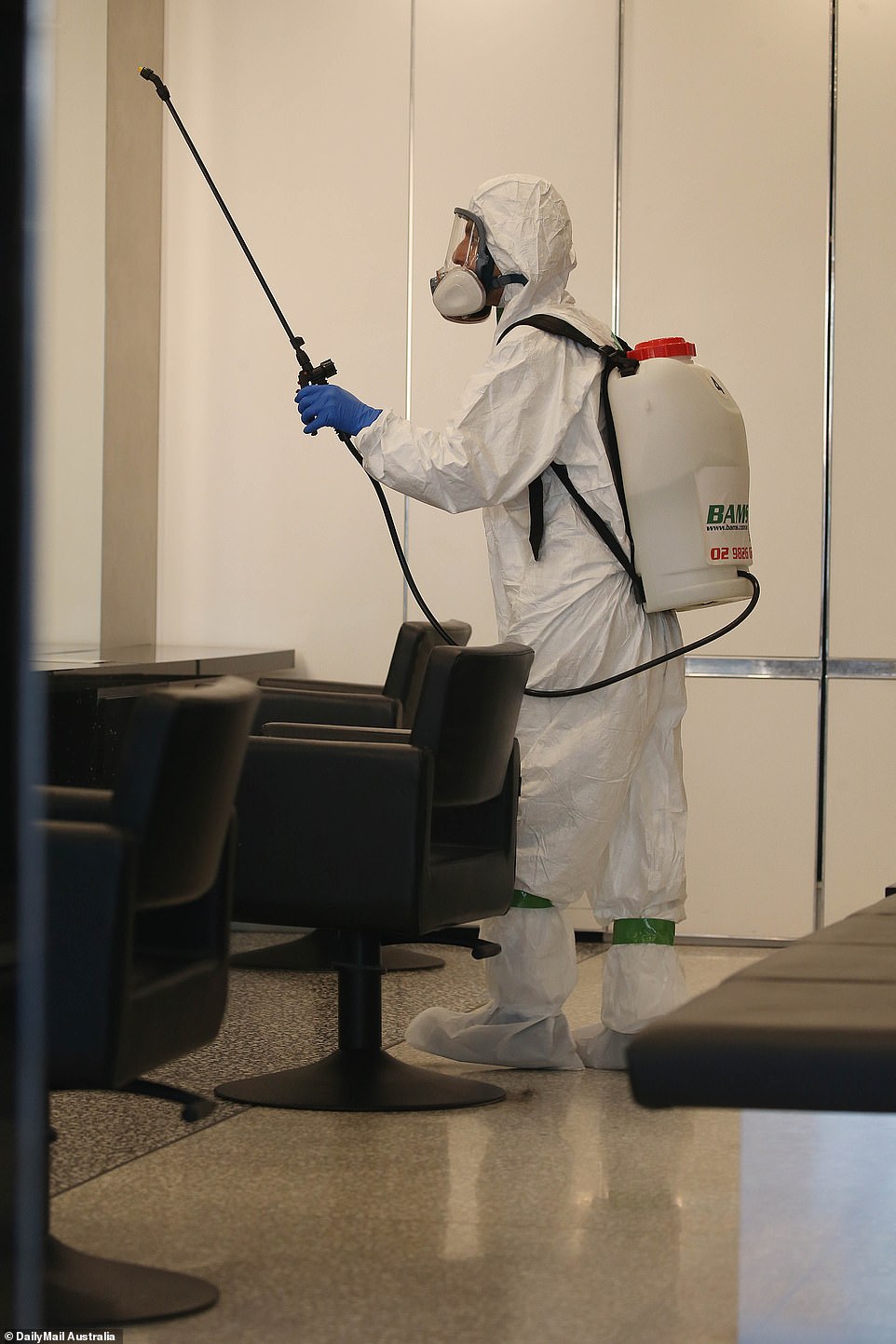 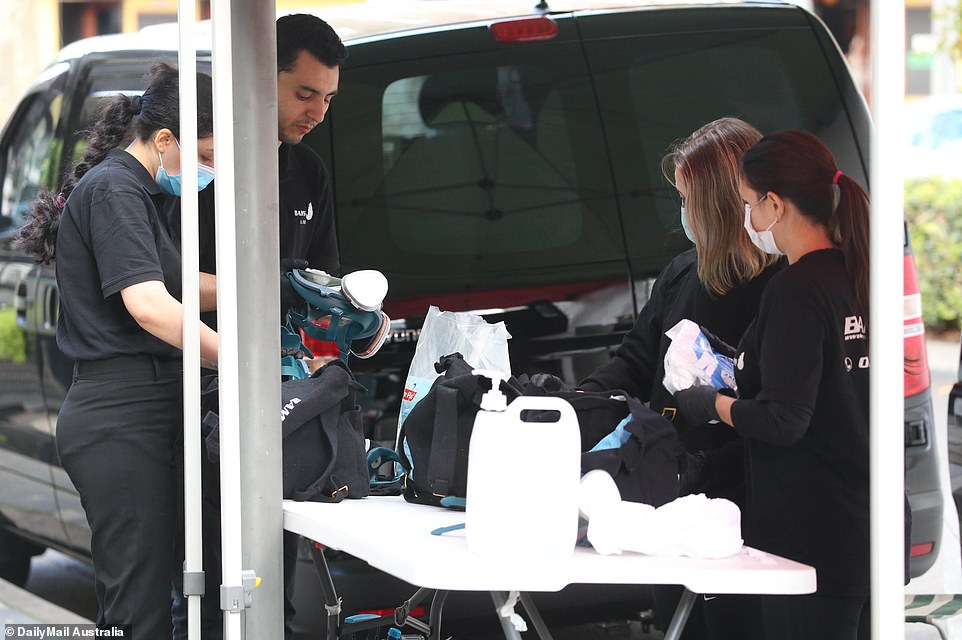 Cleaners prepare their equipment before entering the salon, which will be closed until further notice

‘In light of this, our Double Bay salon will be temporarily closed for deep cleaning and we will advise our re-opening date in due course.

‘An enormous thank you to our valued clients and community who have reached out with messages and support of kindness.

‘It is appreciated so much and we in turn wish everyone to remain safe, healthy and supported during this challenging global pandemic.’

The Double Bay salon has about 10 hairdressers working at any given time, plus beauticians and support staff.

Just one suburb away, Mr Marshall and three fellow Nationals were in attendance at the Paddington pizzeria from 5.55pm to 8.30pm on Monday, the evening before the state’s budget announcement.

Mr Marshall is believed to have contracted the virus from a diner, before he was in attendance at the state parliament building on Macquarie Street the next day.

Mr Marshall then attended the post-budget Nationals party dinner, which was attended by a variety of senior officials including the NSW Premier, who confirmed she tested negative on Thursday.

Health Minister Brad Hazzard also tested negative to the virus and as a casual contact was allowed to leave isolation.

Nationals leader Barnaby Joyce was absent from the beginning of question time on Thursday afternoon after it was believed he was a close contact of Mr Marshall’s.

Mr Joyce returned to parliament soon after and confirmed after meeting with health officials he was not a close contact and was able to return to work.

All four of the MPs and many of their staffs who were at the dinner on Monday night were present in state parliament on Tuesday.

MPs who were at Parliament House on Tuesday or Wednesday were told by the NSW Department of Parliamentary Services to self-isolate until told otherwise. 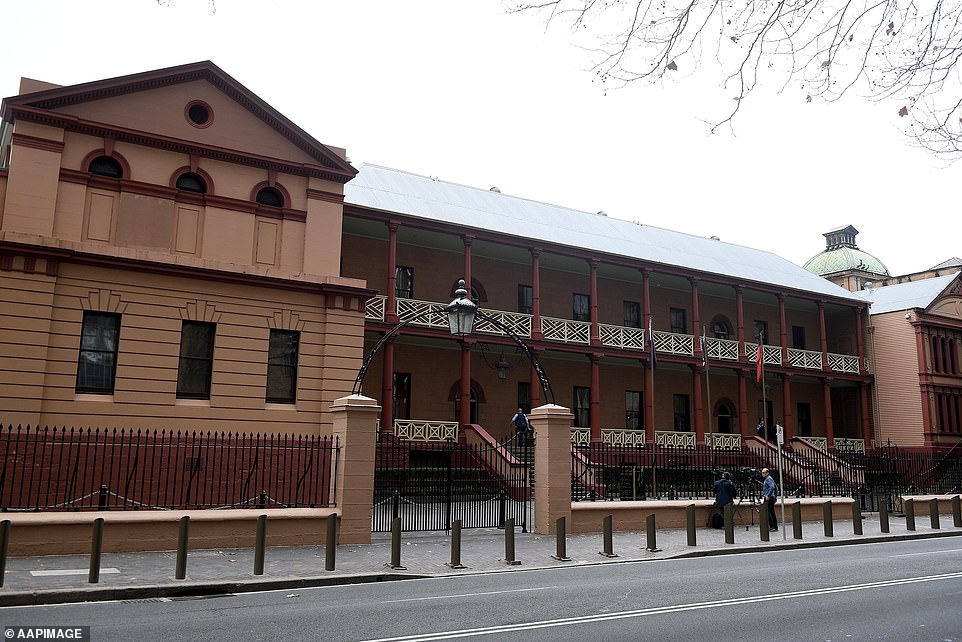 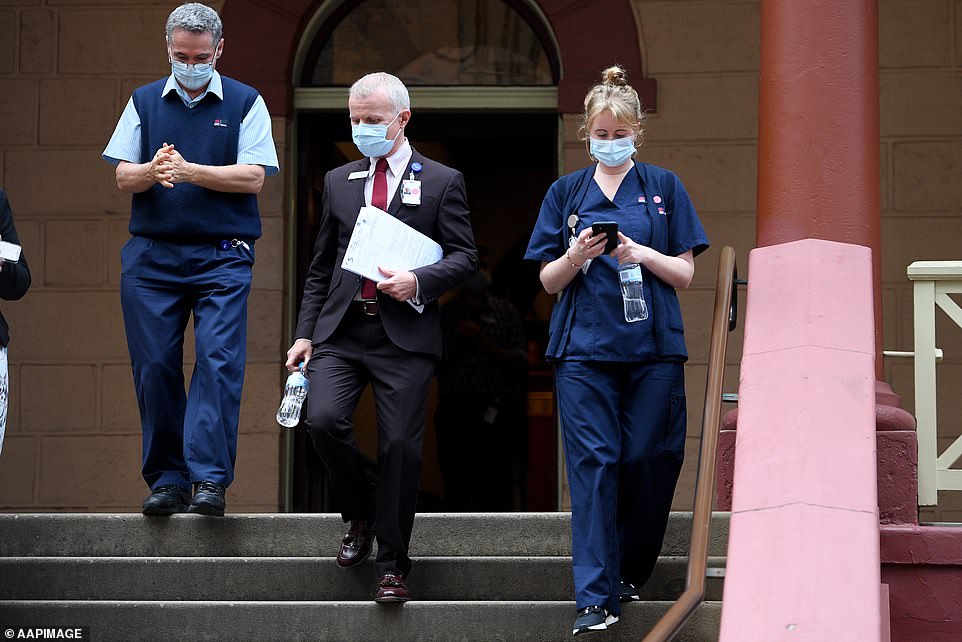 Mr Marshall is believed to have contracted the virus from a diner, before he was in attendance at the state parliament building on Macquarie Street the next day 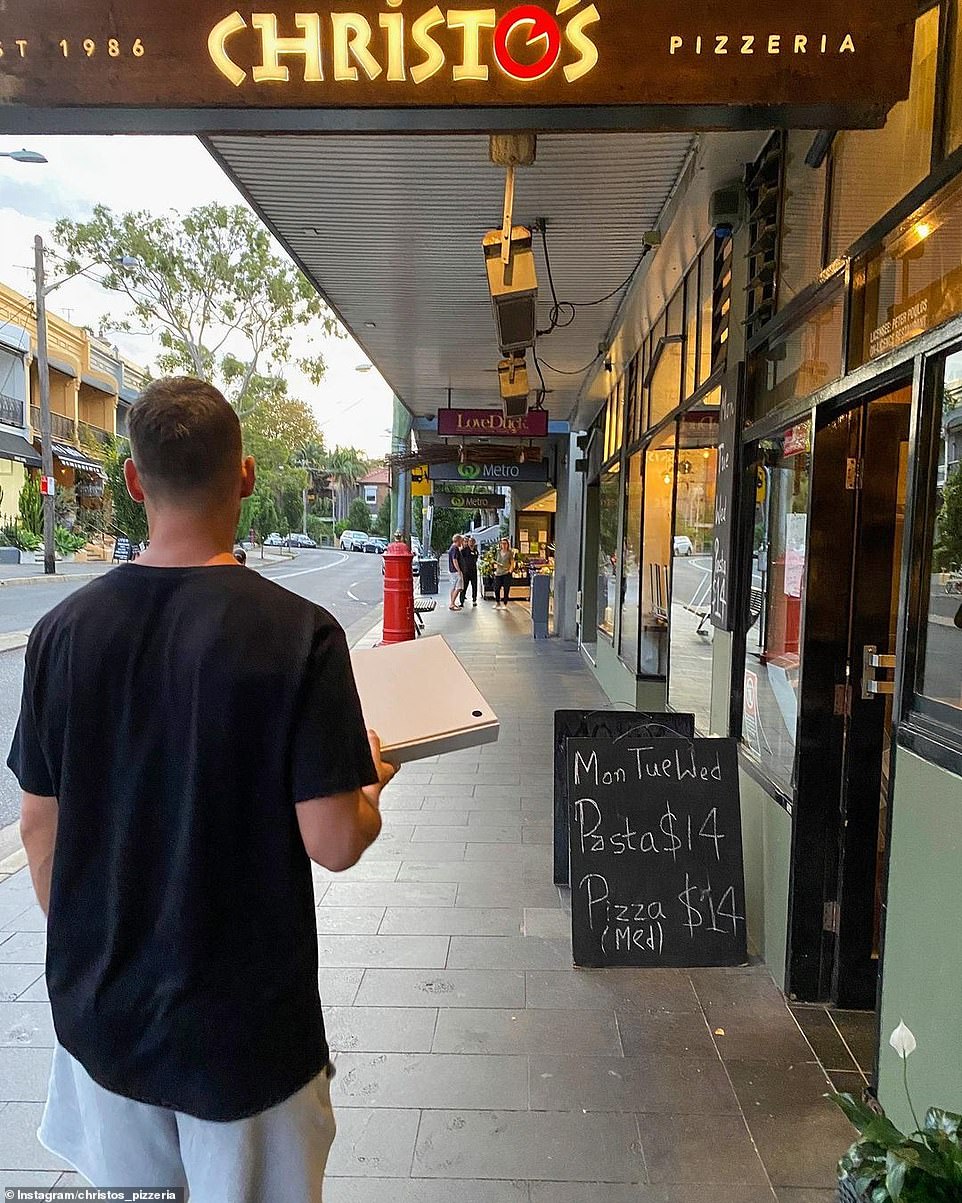 A Nationals dinner at Christo’s Pizzeria in Paddington is believed to be the catalyst for the superspreader event, with four MPs and their staff all attending the pre-budget event 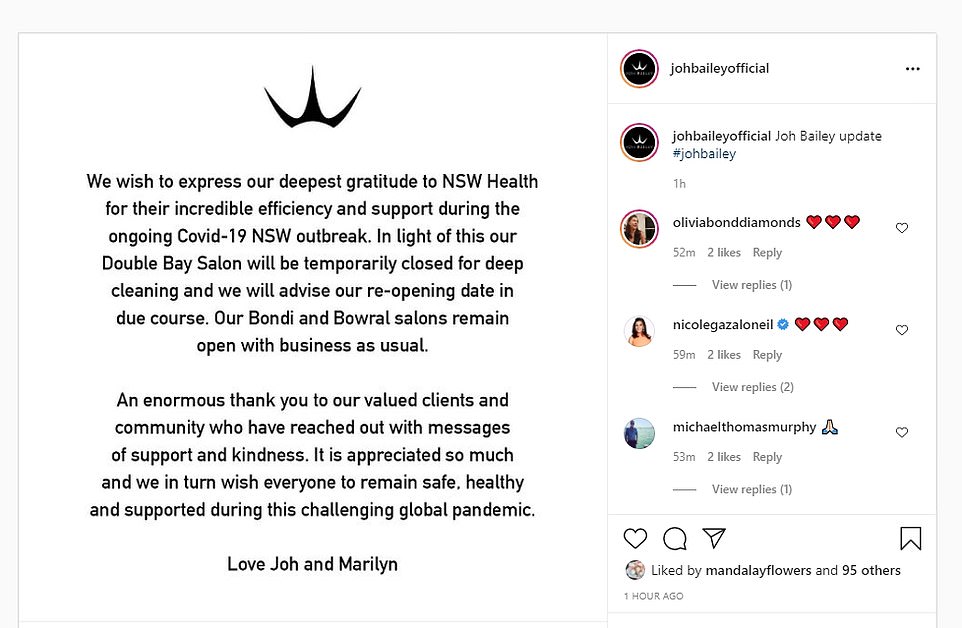 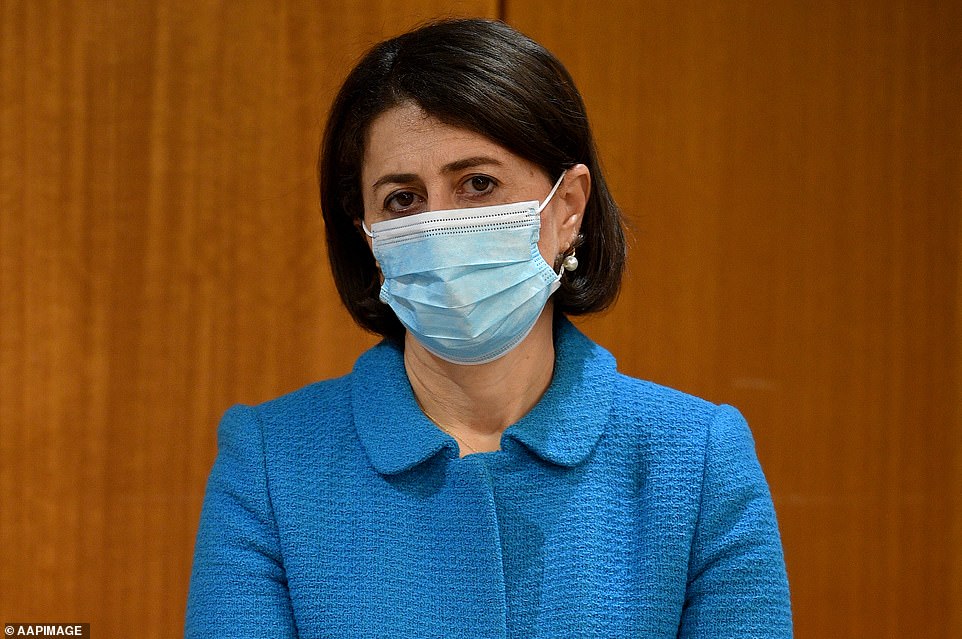 NSW Premier Gladys Berejiklian (pictured on Wednesday) has so far managed to fend off a lockdown, instead bringing in restrictions including limited visitors to the home and mandatory masks – even in offices

Ms Berejiklian warned Sydney was going through the ‘scariest period’ of the pandemic yet, but refused to impose a city-wide lockdown as she confirmed 11 new local cases of Covid-19 overnight.

All but one of the new infections, the hairdresser at Joh Bailey’s salon, are linked to a previous case.

There are now 36 cases linked to the Bondi cluster, which prompted the NSW premier to impose widespread restrictions to slow the spread  of the virus.

NSW Health said 11 of the 30 people who went to a ‘super-spreader’ birthday party in West Hoxton in Sydney’s west had now returned positive Covid-19 results. 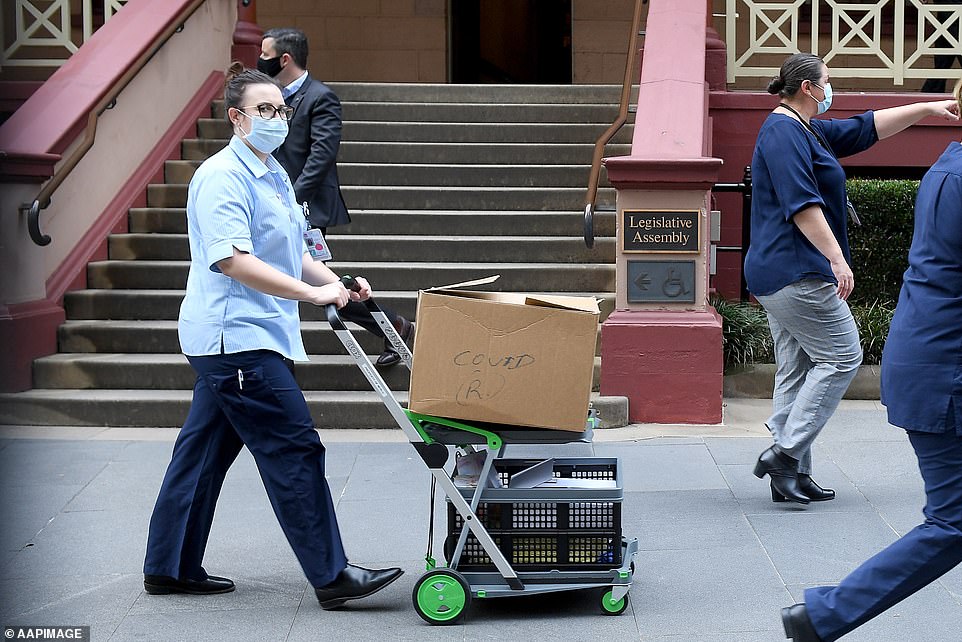 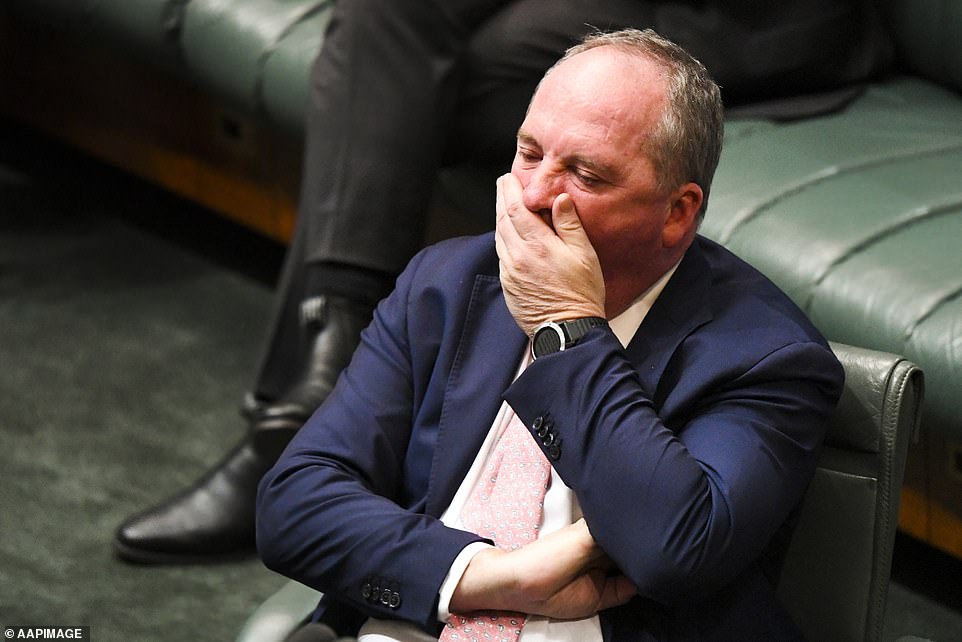 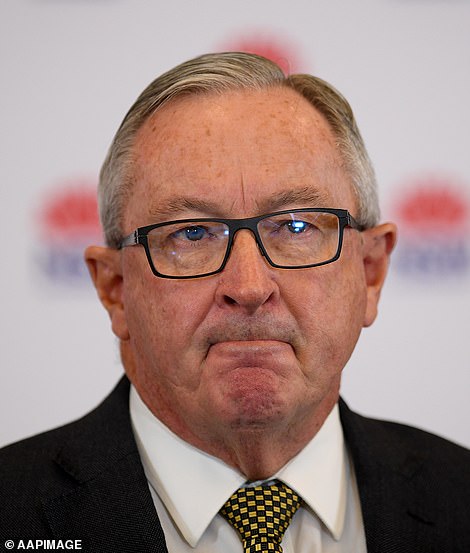 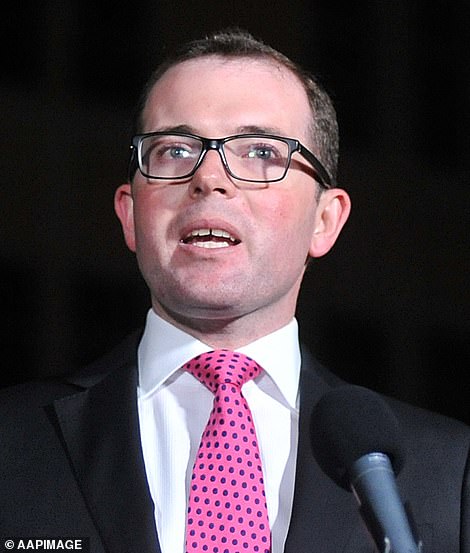 NSW Health Minister Brad Hazzard and four other MPs are in isolation after being close contacts of Agriculture Minister Adam Marshall, who has tested positive to the Delta variant

Ms Berejiklian said she was comfortable the restrictions announced on Wednesday were sufficient to contain the outbreak.

‘This is perhaps the scariest period that New South Wales is going through, and [NSW Chief Health Officer] Dr Chant and I have an equal view of that,’ she said.

‘It is a very contagious variant but at the same time we are comfortable that the settings we have in place are appropriate.’

Fears were earlier mounting that millions of Sydneysiders may soon be confined to their homes as the virus spreads across the city, but this did not come to pass.

Victorian contact tracers are also scrambling to stop the virus spreading again after a man in his 60s tested positive to Covid-19 in Melbourne after visiting his daughter in Sydney over the weekend.

Canberra is also bracing for further cases with politicians having re-entered the capital. 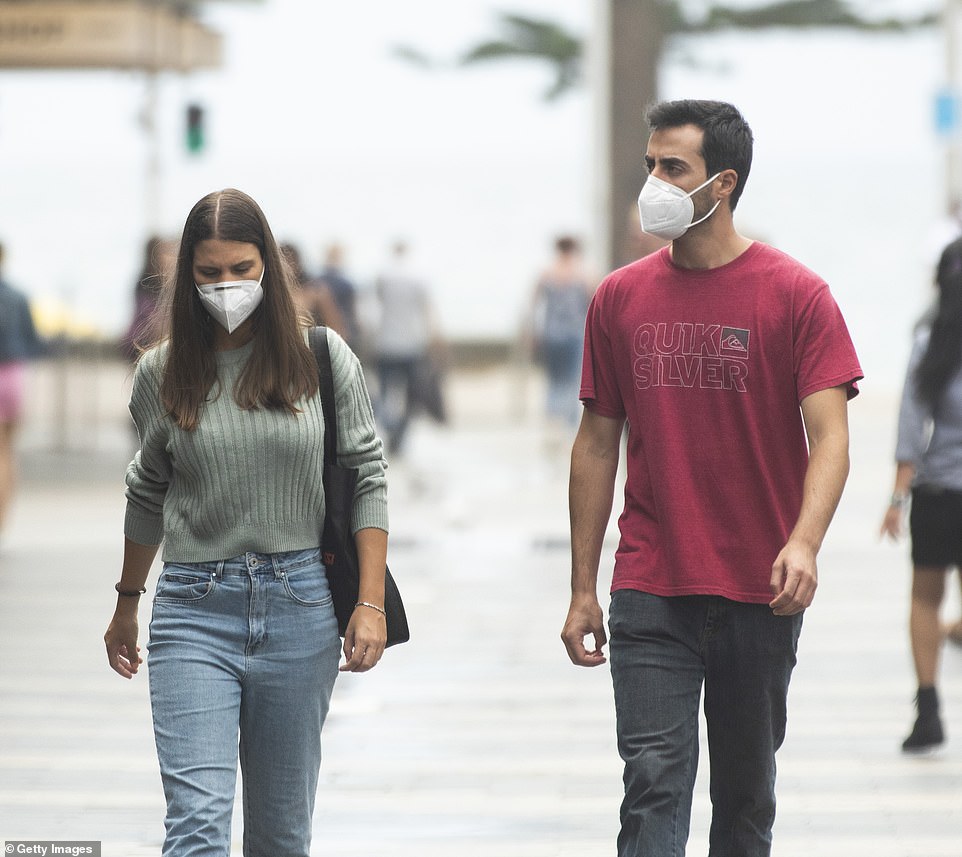 Covid cases are on the rise in Sydney (pictured, a couple in mandatory masks in Manly) 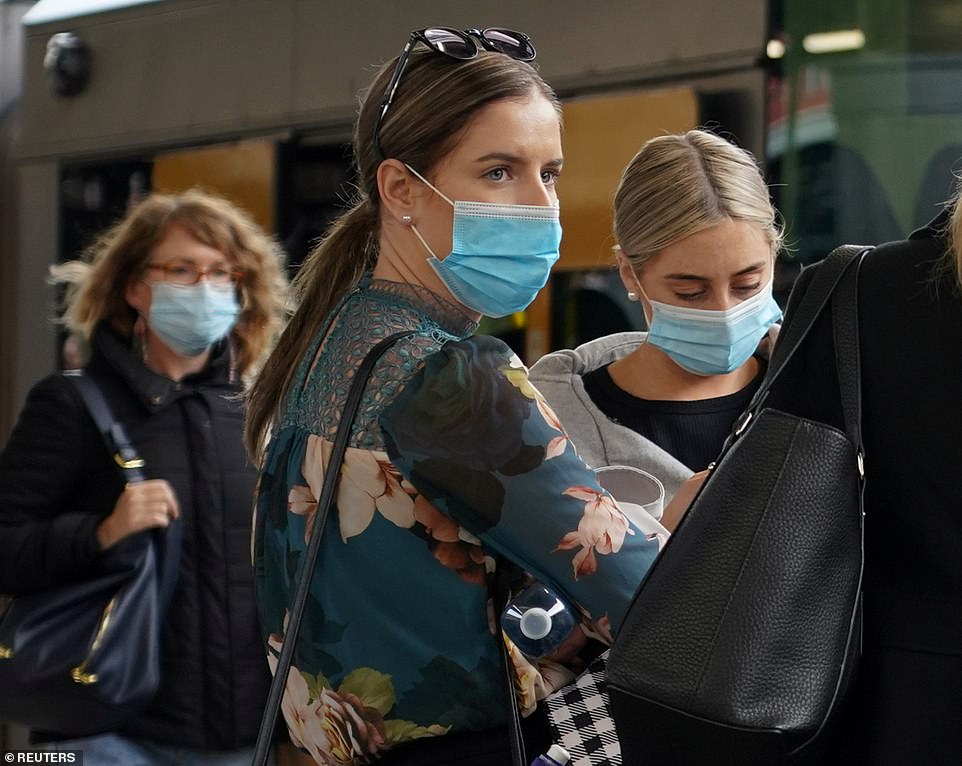 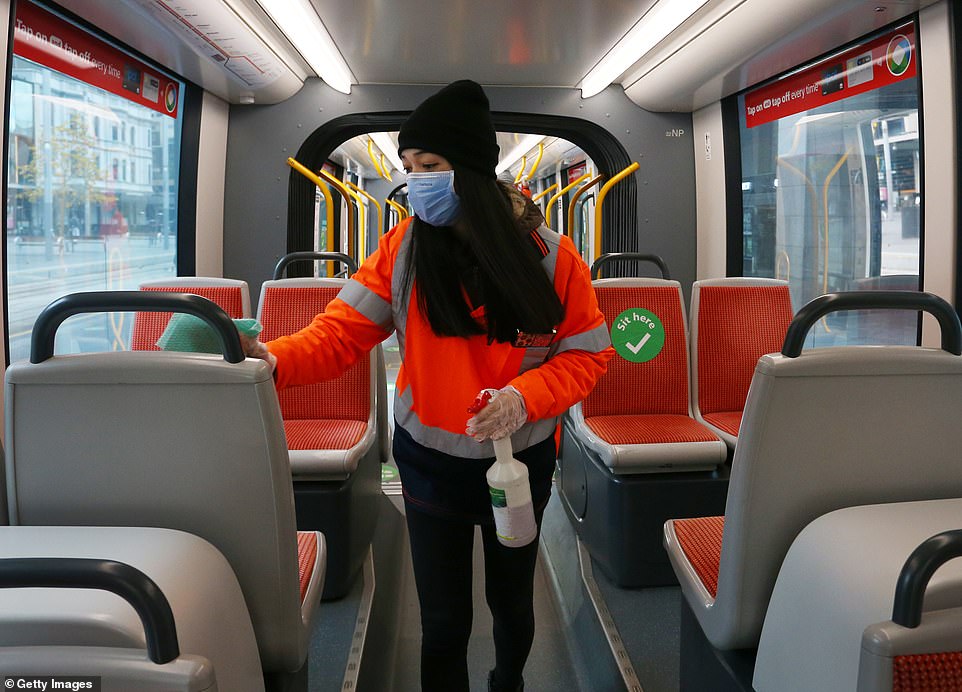 Light rail cleaners are seen wiping down a tram in the Sydney CBD on Thursday. Fears are growing the virus may be spreading through multiple ‘super-spreader’ events after 11 cases were linked to a birthday party attended by 30 people in West Hoxton in Sydney’s west

From 4pm Wednesday for one week:

Visitors to households will be limited to five guests – including children;

Masks will be compulsory in all indoor non-residential settings, including workplaces, and at organised outdoor events;

Drinking while standing at indoor venues will not be allowed;

Singing by audiences at indoor shows or by congregants at indoor places of worship will not be allowed;

Dancing will not be allowed at indoor hospitality venues or nightclubs however, dancing is allowed at weddings for the bridal party only (no more than 20 people);

Dance and gym classes limited to 20 per class (masks must be worn);

The one person per four square metre rule will be re-introduced for all indoor and outdoor settings, including weddings and funerals;

Outdoor seated events will be limited to 50 per cent seated capacity; 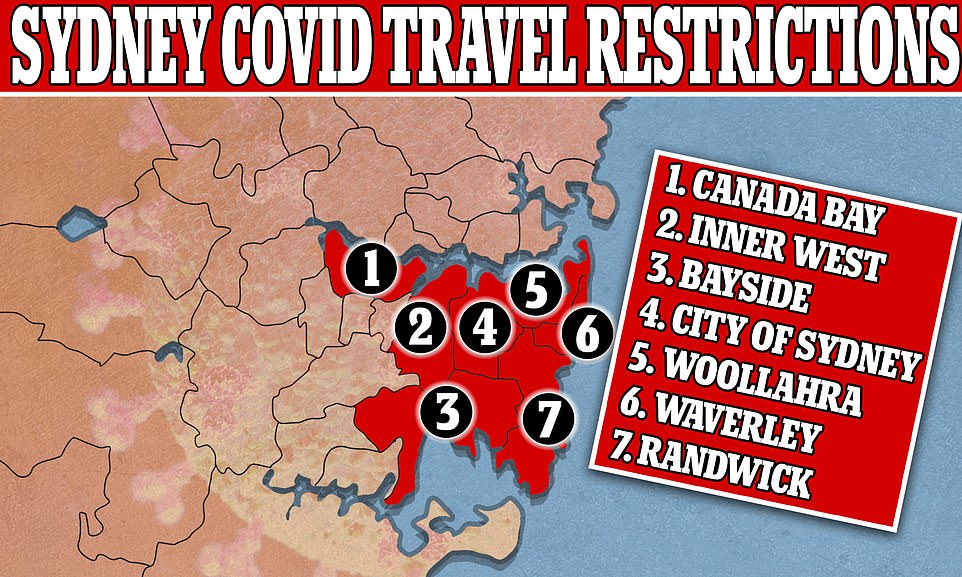 THE THREE FACTORS THAT COULD SEND SYDNEY INTO LOCKDOWN

How fast the Delta variant is spreading

Lockdown-happy premiers in other states including Western Australia, Victoria and Queensland have already slammed their borders shut, disrupting school holiday plans for thousands.

Ms Berejiklian, who has always strived to take a measured approach to outbreaks, has so far stood firm by refusing to lock down Sydney, instead bringing in a number of restrictions including limits of five visitors to a household and mandatory masks.

The Delta variant is so contagious that two people in Bondi this week caught Covid by momentarily brushing past each other.

‘She hasn’t gone to lock down Australia’s biggest city,’ he said.

‘But has taken the positive decision to keep Sydney and NSW open for its residents and to continue to rely on what is Australia’s best contact tracing system.’

Hold the Tequila. The Sunrise Is All Some Travelers Need.