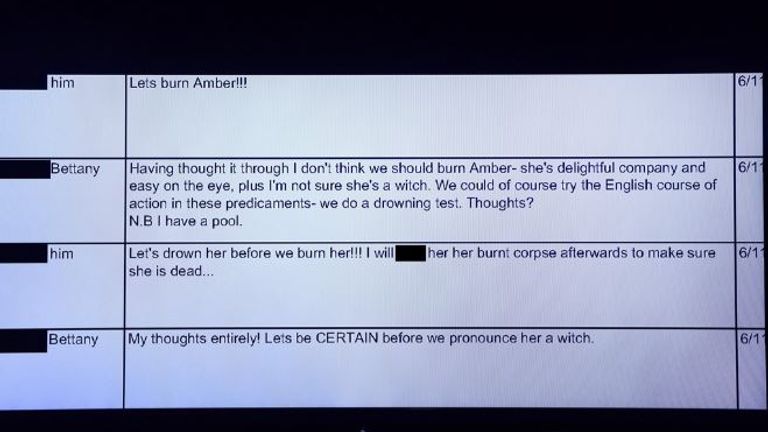 Johnny Depp has told the court he was “a victim of domestic violence” as he concluded his evidence on day eight of the case, with his former house manager testifying Amber Heard acted “like a spoilt teenage child” and drank “one to two bottles of wine a day”.

An audio recording of Heard and Depp discussing their relationship breakdown in 2016 was played, in which the actress can be heard saying to Depp: “Tell the world Johnny, tell them I Johnny Depp, a man, am a victim too of domestic violence”.

Depp’s lawyer Camille Vasquez asked him what he said in response to the assertation he was a victim of such abuse, and he said: “Yes, I am”.

Here are some of the key points from the eighth day of testimony:

• Depp concludes his evidence, as recordings reveal the couple at the height of numerous heated arguments
• Depp’s ex house manager describes moment he found the star’s severed finger and put it in a plastic container
• It’s claimed damage to Depp’s home in Australia totalled over £50,000
• Depp defends his “burn the witch” text messages to actor Paul Bettany, who’s due to give evidence later in the case
• Photos of Heard’s left arm with what appears to be “long uniform cuts” are shown to the court
• Catch up on what has been said so far in our live reporting of the trial as it happens

Depp, 58, is suing his former wife over an opinion piece she wrote for the The Washington Post in 2018 which his lawyers say falsely implies he physically and sexually abused her.

A bloodbath, cigarette burns and vomit

Further audio recordings were played to the jury over the day, many showing the couple verbally attacking each other.

During several of the recordings, Depp could be heard attempting to extricate himself from the situation and leave, while Heard continued the dispute. It’s a pattern of behaviour Depp’s team allege occurred regularly.

In one heated conversation Depp can be heard saying to Heard: “Walking away is necessary… Otherwise it’s just going to be a bloodbath… Like it was on the island… It’s just not worth it.”

The island reference refers to an argument the couple had during a trip to Depp’s private island in the Bahamas in August 2014, during which time he attempted to detox from painkilling tablets.

In another recording, Heard can be heard criticising the action of one person “putting a cigarette out” on someone else. Depp can be heard replying to her and saying, “shut up fat arse”.

Depp told the lawyer Heard’s claims in the clip were “grossly exaggerated” and clarified, “I did not throw a cigarette at her or put a cigarette out on her”.

The Pirates Of The Caribbean star could be heard throwing his wedding ring to the ground during another audio recording of the pair during a dispute.

Depp was also asked about earlier questioning from Heard’s lawyer, Ben Rottenborn, who said last week that the actor “vomited in his sleep every night”.

Depp said he did not vomit every night, and if he had he would have “sought medical help”.

The actor also told the court he was “ashamed” of some of the language used in texts to his friend, fellow actor Paul Bettany.

However, Depp said the language used in a series of messages exchanged in June 2013 during which he said they should “burn” and “drown” Amber wasn’t “intended to be real”.

Depp said the “text about burning Ms Heard is directly from Monty Python and burning and drowning witches… It is a film we all watched when we were about 10, it’s irreverent and abstract humour”.

He said it was that “English, dry, obtuse sense of humour” which gave him “an instant connection” to Bettany. Depp also claimed that on one occasion Heard “demeaned” Bettany’s then 18-year-old son, making him “burst into tears”.

The English actor, who has worked with Depp in several films, will give evidence later in the trial.

Depp also talked about the now infamous incident during which the tip of his finger was sliced off during a row with Heard in Australia in 2015.

In a text sent to his private physician Doctor Kipper, Depp talks about “chopping my finger off”, but the actor said that rather than meaning he cut it off himself, he simply meant it as shorthand to explain his finger had been injured.

Depp later recalled how he once gave Heard career advice after she asked him: “How can I avoid being stereotyped as the beautiful blonde who gets her breasts out and goes naked and has to ‘stuuck’ [have sex with] people in movies”.

He said this was the basis of the reference he was making in the phrase “Loves naked Hollywood” which he admitted scrawling onto a mirror in black oil paint in the master bathroom of his home in Australia during the Australia argument.

The second witness of the day was Depp’s former house manager Ben King. Mr King looked after Depp and Heard in London in 2014, before going on to join them for their trip to Australia the following year.

Mr King said during his time looking after them in a townhouse in Mayfair, London, while Depp was filming the movie Mortdecai, he witnessed numerous arguments between the pair, describing Heard’s behaviour during one altercation as “like a spoilt, teenage child”.

He also said it was Heard he witnessed drinking red wine during their stay, rather than Depp, consuming “one to two bottles a night”. His evidence also mirrored Depp’s team’s earlier description of Heard pursuing Depp during their arguments, saying she followed the actor “from room to room, going in or at least rapping on the door”.

Mr King graphically described the moment he found the tip of Depp’s finger in the bar area of the house, “wrapped up in a scrunched-up piece of tissue paper, covered with blood”. We had previously heard it was the house chef who had found the finger.

Describing the damage to the house during the fight, he said it amounted to at least £50,000 worth of damage.

‘Have you ever got so angry with someone that you just lost it?’

The court was also shown photos which appeared to show “long uniform cuts” to Heard’s arm, which Mr King said he had first seen when he and Heard landed from their flight back to LA from Australia. Earlier Mr King told the court Heard had spent around 15 minutes in the plane toilet before take-off, and had to be asked to return to her seat so the flight could commence.

He said that during the flight, when he had asked Heard what had caused the fight in Australia, she had responded: “Have you ever got so angry with someone that you just lost it with them?”, appearing “incredulous” when he said no.

During Depp’s cross examination by Heard’s legal team he was read out a long series of article headlines, all for negative stories about him written between 2014 and 2017 – before Heard wrote the op ed this entire case revolves around.

Depp told the court the fact he was receiving such criticism stemmed from a temporary restraining order Heard brought against him in 2016, telling Heard’s lawyer: “These are all hit pieces… This is a pathetic attempt.”

Heard obtained a restraining order against Depp in May 2016 after accusing him of abuse, which he denied, and the pair settled their divorce out of court in 2017.

As well as actor Paul Bettany, American star James Franco, and tech entrepreneur Elon Musk are also scheduled to give evidence during the trial.

Read more:
The trial against The Sun – what happened?
Why are they in court again?

Many of the witnesses involved in the case were previously called to give evidence to Depp’s 2020 trial in London, in which he sued the publisher of The Sun newspaper over an article that referred to him as a “wife-beater”.

The judge in that case found the claims in the article to be “substantially true” and Depp was later refused permission to appeal the case at the Court Of Appeal.

Ms Heard’s Washington Post article did not mention Depp by name, but was titled: “I spoke up against sexual violence – and faced our culture’s wrath.”

The trial in Fairfax County, Virginia, is scheduled to last six weeks.

Kenneth Roth, ‘Godfather’ of Human Rights Work, to Step Down