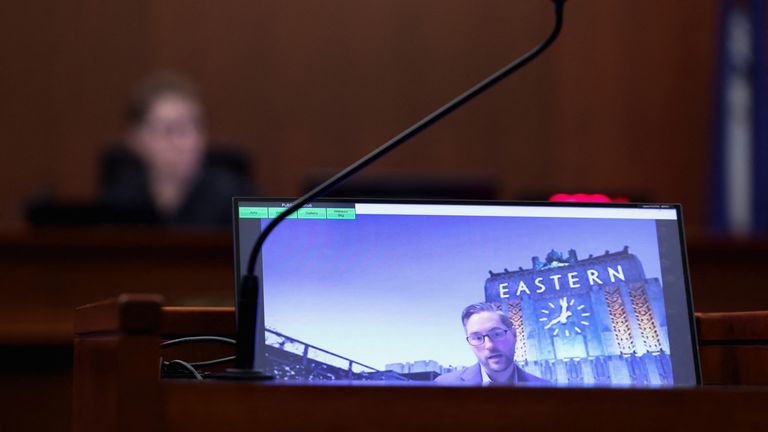 An artist friend of Johnny Depp became tearful in court as he described claims of domestic violence by Amber Heard as “malicious” and “fraudulent” – saying they have spread “around the world” and “wrecked” the actor’s life.

Isaac Baruch, who has known Depp since the early 1980s, was questioned on the witness stand during the second day of the star’s libel trial against his ex-wife.

During his testimony at the Fairfax County Courthouse in Virginia, the jury heard how Mr Baruch lived rent-free in an apartment owned by Depp at the Eastern Columbia Building (ECB) in Los Angeles between 2013 and 2016, situated next to another penthouse where the actor and Heard were living themselves.

The artist and musician was one of three people to answer questions on Wednesday, with Depp’s older sister Christi Dembroski finishing her testimony, and Brandon Patterson, the general manager of the ECB, confirming details about CCTV footage taken from the building.

Here are some of the key points from the second day of testimony:

• Ms Dembrowski finished her evidence – the court heard how she once sent a text to Heard saying: “I love him so much but he needs help”
• Mr Baruch, who lived in a penthouse apartment next to Depp and Heard, told the court he never witnessed any violence and never saw Heard with any marks or bruises, but said he was aware of two arguments
• Asked if he was angry with Heard, Mr Baruch became emotional – saying the actress had made a “fraudulent DV (domestic violence) claim to extort and blackmail a man”
• The court heard of a text message Depp sent to Mr Baruch, saying he hoped Heard’s “rotting corpse is decomposing in the f****** trunk” of a car
• Mr Patterson was asked to confirm the accuracy of more than 80 CCTV clips taken from the ECB
• Catch up on what has been said so far in our live reporting of the trial as it happens

During his time on the witness stand, Mr Baruch gave a colourful testimony that at times drew laughs in the courtroom, including from Depp and Heard. However, he became emotional when asked if he was “angry” at the actress.

“Oh, about all the phoney pictures that were taken and put in tabloids, and about the fake narrative?” he replied. “And the way she’s trying to… got a fraudulent DV (domestic violence) claim to extort and blackmail a man? Yeah, that kind of got me frustrated, confused, angry, upset, yes.”

‘It’s gone out the door and around the world’

Asked if he is still angry with Heard, Mr Maruch said: “It’s six years… am I angry anymore? What I am is tired and I want this all to end.”

He told the court he wants Heard “to go heal, him to go heal” and that “so many people have been affected by this malicious lie that she started… and it’s gone out the door and around the world”.

Becoming tearful, Mr Baruch continued: “I’m not angry at anybody. I want the best for her, for her to take her responsibility, heal and move on. Move on. For Johnny, his family has been completely wrecked by all of this stuff and it’s not… it’s not fair… it’s not right what she did and what happened for so many people to get affected from this, it’s insane how this happened.”

Depp, 58, is suing Heard, 35, for libel over a column she wrote in The Washington Post in 2018, in which she discussed her experiences of domestic abuse. Lawyers for the actor say the article falsely implies his ex-wife was physically and sexually abused by him when they were in a relationship.

Heard’s legal team says that, although her article is protected by the first amendment of the US constitution – freedom of expression – there is also evidence that Depp abused her physically on multiple occasions. The actress is countersuing Depp for statements made about her.

Questioning on Wednesday focused heavily on the period around this date – a day that Heard says Depp was violent towards her, which came the day after his mother’s death and shortly before Heard filed for divorce.

Mr Baruch was asked about his encounters with the actress in this period and told the jury that on 22 May 2016, which happened to be his birthday, he saw the actress in a well-lit area but saw no signs of injuries.

“I’ve seen her (with) no make-up… with make-up, glammed up… for three-and-a-half years I’ve seen her in different forms,” he said. “I inspect her face… I’m looking at the whole thing and I don’t see anything… I don’t see a cut, a bruise, swelling, redness. It’s just Amber’s face.”

Earlier in the day, lawyers for Heard continued their cross-examination of Depp’s older sister Ms Dembrowski, who first took to the stand on Tuesday as the trial’s first witness.

She was asked to confirm an email exchange she had with a doctor who helped Depp with his addiction to pain medication.

“You believe that your brother needed help with drugs and alcohol?” Heard’s lawyer Ben Rottenborn asked.

Ms Dembrowski replied to say she was concerned about Depp’s use of one medication but didn’t believe he had a problem with drugs or alcohol overall, or that he romanticised drug culture.

Later in the day, in a recorded testimony, ECB manager Mr Patterson was taken through scores of CCTV clips showing Depp, Heard, and police officers, taken from the building’s surveillance cameras in 2016, and asked to confirm they were genuine.

Asked if Depp had ever offered him money, he said no.

In the opening statements on Tuesday, the actor’s lawyers said his ex was preparing for “the performance of a lifetime” during the trial, while her legal team said the case would expose the “real” person behind the “fame” and “pirate costumes”.

Heard’s lawyers also told the jury they would hear evidence of physical and sexual abuse during the hearing. Depp strenuously denies the allegations.

Both he and heard are set to give testimony during the trial, which is scheduled to take place over six weeks. Actors Paul Bettany and James Franco, as well as tech entrepreneur Elon Musk, are also on the witness list.

Depp is suing for $50m (£38.2m), while Heard has issued a counterclaim. The former couple started dating after meeting on the set of 2011 film The Rum Diary, and married in Los Angeles in February 2015.

Heard obtained a restraining order against Depp in May 2016 after accusing him of abuse, which he denied, and the pair settled their divorce out of court in 2017.

New York subway shooting: Wanted man arrested in Manhattan after calling police to come and get him, say authorities | US News