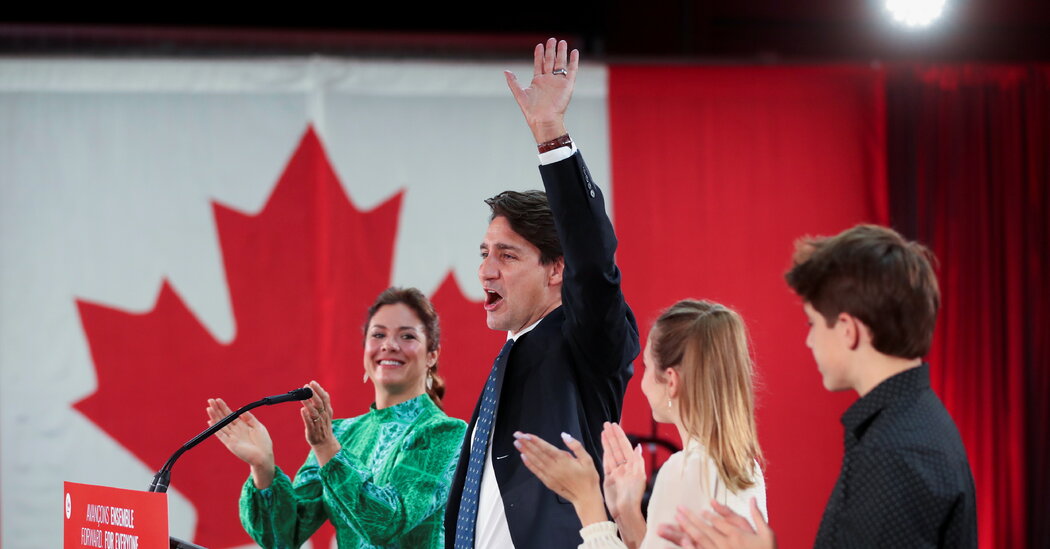 OTTAWA — One day after an election Prime Minister Justin Trudeau called a “pivotal moment” in his country’s history, Canada seems to have pivoted right back where it started.

Mr. Trudeau eked out a slim victory on Monday after voters turned out in record-low numbers, but his Liberal Party’s share of power in Parliament remains virtually the same as it was during the last session of Parliament. So does every other party’s.

That helps explain why some Canadians are calling it the election to nowhere.

And the winner may turn out to be the loser. Critics say the vote may have undermined Mr. Trudeau’s credibility and reinforced the notion among many Canadians that he is a political opportunist.

“His job is secure, but I still think he comes out diminished in the end from this,” said Andrew McDougall, a professor of political science at the University of Toronto.

When Mr. Trudeau called the 36-day campaign — the shortest allowed by law — in August, he said he needed a strong mandate to bring the pandemic to heel and lead the country to economic recovery.

Mr. Trudeau never explicitly acknowledged that he hoped to ride his popularity from the government’s handling of the pandemic to a majority in Parliament. But he also never denied it.

Still, some questioned both the timing of the election, and the need.

Prominent Liberals, among them his friend and former top political adviser Gerald Butts, argued that Mr. Trudeau never offered a compelling case that a minority Parliament had stopped him from accomplishing his legislative goals, especially its large pandemic-related spending programs. While the opposition delayed some of Mr. Trudeau’s measures, the only legislation he presented that did not pass were the bills still outstanding when Parliament was dissolved at Mr. Trudeau’s request for the vote.

Anger over the prime minister’s decision to call an election followed him throughout the campaign. So did apathy.

Several polls found that few voters were paying much attention, particularly before Labor Day, when it seems much of the nation’s attention was turned toward beaches, boats and barbecues.

Although the election was the most costly in Canada’s history — it cost $600 million in Canadian dollars — voter turnout, which is likely to remain unchanged when final results are released, was 58.44 percent, the lowest ever.

During the campaign itself, Mr. Trudeau struggled to find an issue that clearly distinguished him from his closest rival, Erin O’Toole.

The first Conservative leader from Ontario, the most populous province, in more than half a century, Mr. O’Toole drafted a new platform for his party that on many key issues differed from Mr. Trudeau’s only in scope and detail. Then, when it appeared during the campaign that Mr. Trudeau was gaining traction by condemning a Conservative promise to repeal the Liberals’ ban on 1,500 models of assault-style rifles, Mr. O’Toole dropped it, if conditionally.

Mr. Trudeau was similarly unable to make headway by championing his climate change measures, including this introduction of a national carbon tax, to his advantage.

Before the campaign, record-setting heat waves descended on parts of Western Canada, bringing death and out-of-control wildfires, including one that consumed a town in British Columbia. It put climate change higher on the list of concerns for Canadian voters.

But in a bid to attract moderate voters to the Conservative Party, Mr. O’Toole dropped the its long-held opposition to carbon taxes, which had been driven by the party’s power base in Alberta, the home of the oils sand. Mr. O’Toole released a carbon tax proposal as part of a package of climate measures.

That undercut Mr. Trudeau’s efforts to argue that the Conservatives did not have a credible plan to mitigate climate change.

“The Conservative Party has put forward a more ambitious platform than in 2019, in part to take that off the agenda,” said Kathryn Harrison, a professor of political science at the University of British Columbia.

At the end of the campaign, Mr. O’Toole did give Mr. Trudeau an opening, and Mr. Trudeau pounced on it. The Conservative leader expressed opposition to Mr. Trudeau’s mandatory vaccination and vaccine passport plans, a stance well outside what polls show to be the Canadian consensus.

“Trudeau tried to use vaccine mandates as a wedge, and it worked quite efficiently,” said Duane Bratt, a political scientist at Mount Royal University in Halifax.

But perhaps not efficiently enough.

While the final results are days away, Mr. Trudeau’s Liberals stood at 158 seats, just one more than they emerged with after the 2019 vote — and well short of the 170 seats needed to control Parliament. The Conservatives had 119 votes, two fewer than before.

The Conservative did score a symbolic victory: They won the greatest share of the popular vote. But the concentration of Conservative support in places like Alberta meant that it didn’t translate into the largest number of seats.

The New Democrats under Jagmeet Singh, whose support Mr. Trudeau will again need to govern, gained one new seat, and now have 25. The Bloc Québécois emerged with 34 seats, a gain of two.