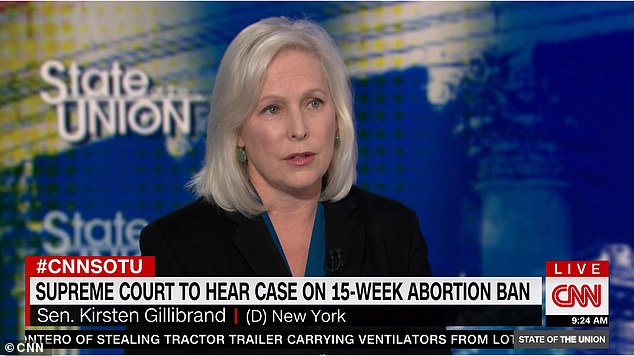 Kirsten Gillibrand said Sunday that she opposed all three of Donald Trump‘s Supreme Court nominees because she was afraid they would overturn Roe v. Wade and threaten women’s rights to an abortion.

‘I’m very concerned,’ the New York senator told CNN‘s ‘State of the Union’ when asked how she felt about an upcoming case involving abortion laws.

The Supreme Court has agreed to hear a case in the fall regarding a Mississippi law that bans abortion after 15 weeks, which is around eight weeks earlier than made legal under landmark abortion case Roe v. Wade.

New York Senator Kirsten Gillibrand said Sunday that she opposed all of Donald Trump’s Supreme court nominees because she was concerned it would lead to the overturning of abortion rights awarded through landmark case Roe v. Wade 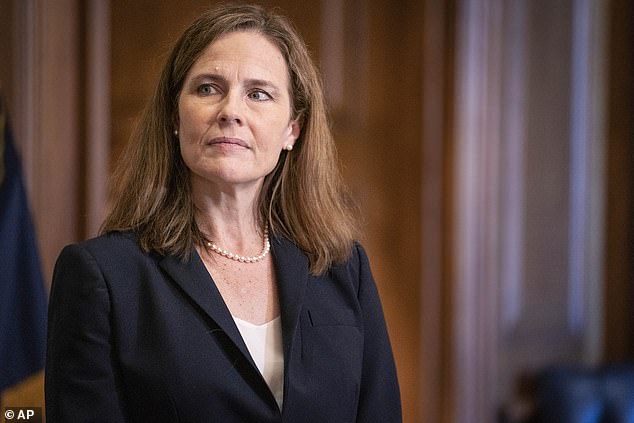 ‘I’m very concerned,’ Gillibrand said when asked how she felt about an upcoming case involving abortion laws. ‘It’s one of the reasons why I deeply opposed the nomination of Amy Coney Barrett’ 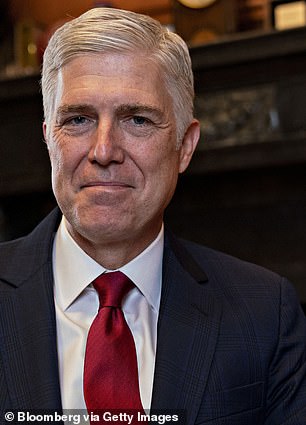 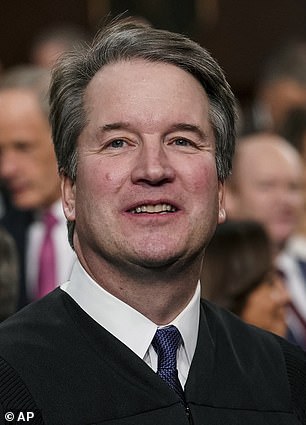 She also slammed the then-Republican controlled Senate for blocking the nomination of Merrick Garland for a Supreme Court seat when one opened up under Barack Obama following the death of conservative Justice Antonin Scalia.

‘Back to the lack of good will, again Amy Coney Barrett was voted on moments before the next election – just days. And we couldn’t have Merrick Garland have a hearing more than a year out,’ she lamented.

At the time of Coney Barrett’s nomination, however, Gillibrand admitted that even if the process was ‘legitimate’ she still opposed her confirmation because she is pro-life and against the Affordable Care Act.

‘President Trump’s nomination of Judge Amy Coney Barrett to the Supreme Court represents the further degradation of our democracy and the continued politicization of our judiciary,’ she wrote in a statement in September 2020.

‘Even if this process had been legitimate, Barrett’s anti-choice views, opposition to the Affordable Care Act, and hostility to immigrant rights and civil rights make her completely unfit to serve on the Supreme Court. I vehemently oppose Barrett’s nomination and will vote against her confirmation.’

Earlier this month, the Supreme Court agreed to take up the case of a Mississippi state law that bans almost all abortions after the 15th week of pregnancy – giving it the chance to substantially weaken the 1973 Roe. v. Wade decision.

The case will be the first abortion case heard since the Republican Senate confirmed Justice Amy Coney Barrett in the last weeks of Trump’s administration.

The case is setting up to be a major test of the court’s new 6-3 conservative majority.

By hearing the case, the justices will look at whether to overturn a central part of the landmark ruling, a longstanding goal of religious conservatives.

In the Roe v. Wade decision, subsequently reaffirmed in 1992, the court said that states could not ban abortion before the viability of the fetus outside the womb, which is generally viewed by doctors as between 24 and 28 weeks. The Mississippi law would ban abortion much earlier than that. 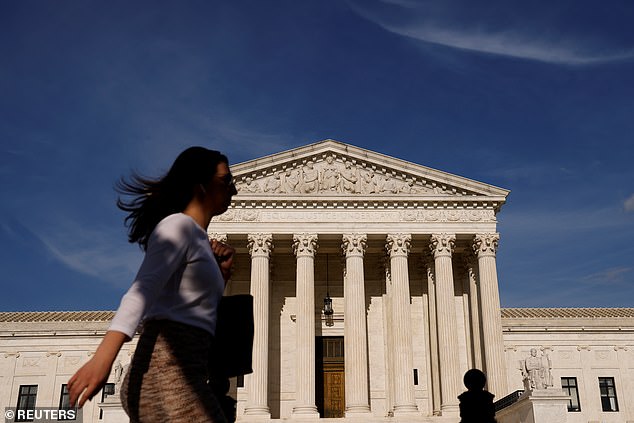 The Supreme court agreed earlier this month to hear a case in the fall on a Mississippi law banning abortion at 15 weeks, which is around eight weeks – or two months – earlier than currently allowed under Roe v. Wade 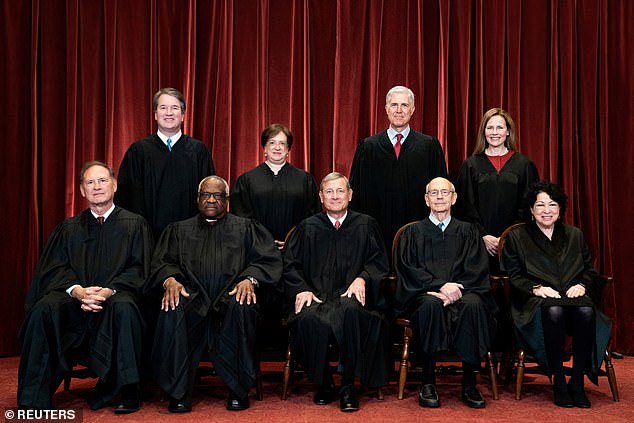 This will be the first abortion case heard by Coney Barrett since joining the court. It will also be a major test of the court’s new 6-3 conservative majority

The Roe v. Wade ruling recognized that a constitutional right to personal privacy protects a woman’s ability to obtain an abortion.

The court in its 1992 decision, coming in the case Planned Parenthood of Southeastern Pennsylvania v. Casey, reaffirmed the ruling and prohibited laws that place an ‘undue burden’ on a woman’s ability to obtain an abortion.

Texas also furthered its restrictions on terminating a pregnancy by became this month the largest state with a law that bans abortions before many women even know they are pregnant.

Republican Governor Greg Abbott signed the bill Wednesday that puts Texas in line with more than a dozen other states that ban abortions after the detection of a fetal heartbeat, which can happen as early as six weeks into the pregnancy.

There is also unique provision in the new law that essentially leaves enforcement to private citizens through lawsuits against doctors or anyone who helps a woman get an abortion, including nurses, front desk staff or even the person who drove the patient to the abortion appointment.

There are no exceptions written into the Texas law for cases of incest or rape.

Girl, 13, sets herself on fire while trying to copy a TikTok stunt