Kyle Rittenhouse: Teenager who shot three people during Kenosha protest thought he was under attack, court hears | US News 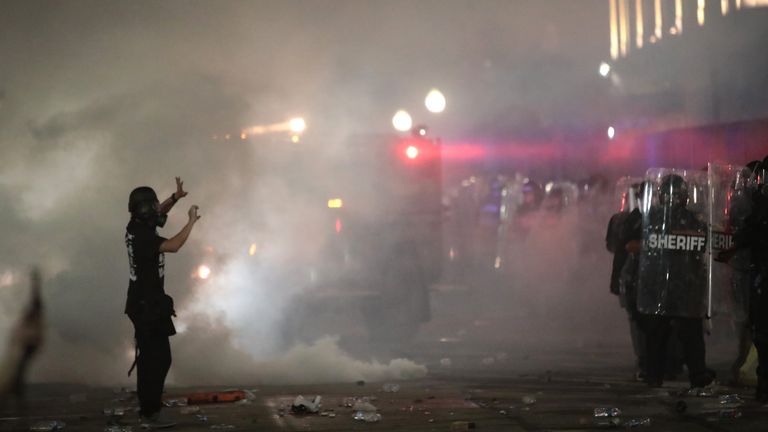 A teenager who shot three people during a protest against racial injustice had thought he was under attack, a trial has heard.

Kyle Rittenhouse, 18, is accused of killing Joseph Rosenbaum and Anthony Huber as well as wounding Gaige Grosskreutz with an assault-style rifle in Kenosha, Wisconsin, on 25 August last year.

A witness at the trial said he had seen Mr Rosenbaum, the first to be shot that night, appear to “lunge” towards Rittenhouse’s rifle in an effort to take it, before Rittenhouse fired.

“I would use those as synonymous terms in this situation because basically, you know, he threw his momentum towards the weapon.”

He added: “I think it was very clear to me that he was reaching specifically for the weapon.

Rittenhouse, a former police youth cadet, had “kind of dodged around” with his weapon before levelling it and firing, Mr McGinniss added.

Earlier in the day, Detective Martin Howard told the trial that a protester, Joshua Ziminski, had fired the first shot into the air – two-and-a-half seconds before Rittenhouse shot Mr Rosenbaum.

Rittenhouse’s defence team has said he went to Kenosha with his rifle and medical kit to protect property from what became violent protests sparked by the shooting of a black man, Jacob Blake, by a white police officer.

While prosecutors have said Rittenhouse was responsible for some of that violence, his lawyers have said he acted in self-defence and had feared his weapon would be taken from him.

Police have said that Mr Rosenbaum had no weapons.

The trial heard that the shooting of Mr Rosenbaum had set in motion the other shootings – protester Mr Huber, 26, who was seen on video hitting Rittenhouse with a skateboard; and Mr Grosskreutz, 27, who had a gun in his hand as he moved towards Rittenhouse.

Also on Thursday, the judge presiding over the trial dismissed a juror who had made a joke to a court security officer about the police shooting of Jacob Blake.

The juror would not repeat the joke for Circuit Judge Bruce Schroeder, who said: “It is clear that the appearance of bias is present and it would seriously undermine the outcome of the case.”