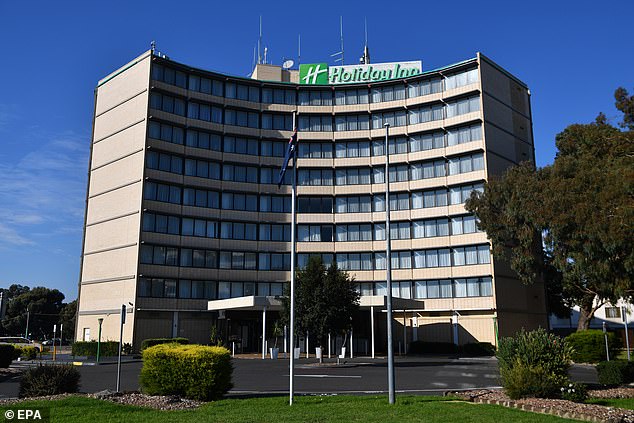 A man accused of sparking Victoria’s five-day lockdown after using a nebuliser in his hotel quarantine room said he’s relieved that a report found it wasn’t his fault.

A secret report into the lockdown found the virus escaped from a quarantine hotel in February when an unmasked woman was swabbed in a open doorway.

The report delivered in March said the virus leaked out into the corridor of the Holiday Inn at Melbourne Airport because a health worker took ‘extended time’ to test the woman for coronavirus.

The virus then started ‘pooling outside the door’ of the room where a 38-year-old man who was using a nebuliser was quarantining with his infant child and partner.

Victoria Health officials previously claimed the virus escaped from his room – sparking a five-day ‘circuit-breaker’ lockdown to control the spread of the outbreak.

‘I am very glad this has come out, though it continues to show there’s systemic problems that need to be resolved,’ the man told 3AW.

The virus escaped from the Holiday Inn hotel at Melbourne Airport in February when an unmasked woman was swabbed in a open doorway, a report has found. The hotel is pictured on April 8

The father claimed he received permission from the health authorities to use the nebuliser – a device used to vaporise medicine so it can be inhaled – while inside quarantine.

Opposition Health Minister Georgie Crozier branded the criticism of the man as an ‘absolute disgrace’.

‘How he has been blamed for the outbreak in Holiday Inn, when in actual fact, this cover-up showed there was swabbing and other issues in the hotel quarantine program that were actually the cause of the outbreak,’ she said.

The Covid-19 Quarantine Victoria Commander Emma Cassar apologised to the man but said the theory remained the outbreak was sparked from the nebuliser.

She said staff were still swabbing those in quarantine with the door open because if it was closed it put those health workers at greater risk of infection.

‘The working hypothesis is still, as I understand, that this was caused by the nebuliser,’ she said.

‘Our swabbing process has gone through some improvements since February and residents are swabbed with the door open so that we can ensure the safety of nurses when swabbing,’ she said.

‘But the recommendation that the door is closed for swabbing was not supported by CQV, the Alfred and [Health Care Authority] due to safety concerns for our staff.’ 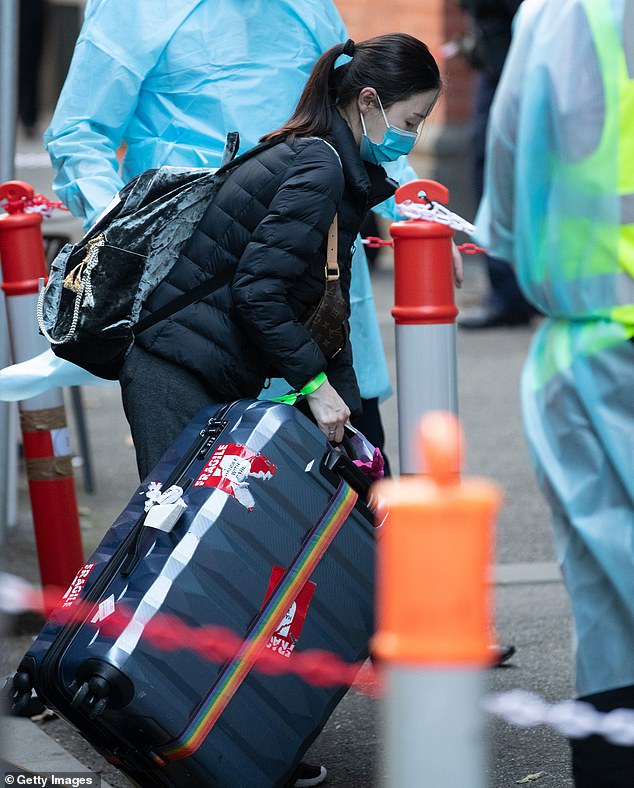 International travelers entering Melbourne’s Intercontinental Hotel on April 8. Authorities had previously believed the source of the February outbreak was a man who was using a nebuliser (woman pictured is not the woman involved in the breach)

The Covid-19 Quarantine Victoria Infection Prevention and Control report found though either the man with the nebuliser or his partner caught the virus when they stepped out of their room to collect a meal or leave rubbish.

The virus then spread further down the corridor to a food and beverage worker in a room next to the family, according to the review obtained by The Australian.

An officer who dealt with the family’s entry and release from the quarantine hotel also contracted the virus.

The report said CCTV footage and staff interviews meant the ‘proposed working hypothesis’ was that the unmasked woman was the source of the outbreak. 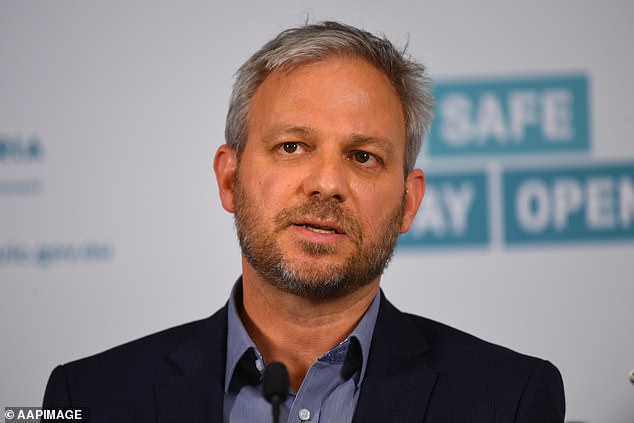 Chief Health Officer Brett Sutton said in February the use of the nebuliser was believed to have spread the virus.

‘We think the exposures are all to that event, the use of the nebuliser, which then meant the virus was carried out into the corridor and exposed the authorised officer, the food and beverage service worker and also the other resident,’ he said.

The Victorian man who was carrying the nebuliser in February said the backlash to the outbreak mad him feel ‘like a criminal’.

He said he had declared the device to authorities.

‘If I was told that I couldn’t use it, I never would have used it,’ he told The Sydney Morning Herald.

‘The way it has all come out in the news and through the government has made it sound like I was using it illegally or that I have snuck it in or something like that. It’s been very distressing.

‘You are left feeling like a criminal or that you’ve done the wrong thing. That has been the hardest thing in all this.’