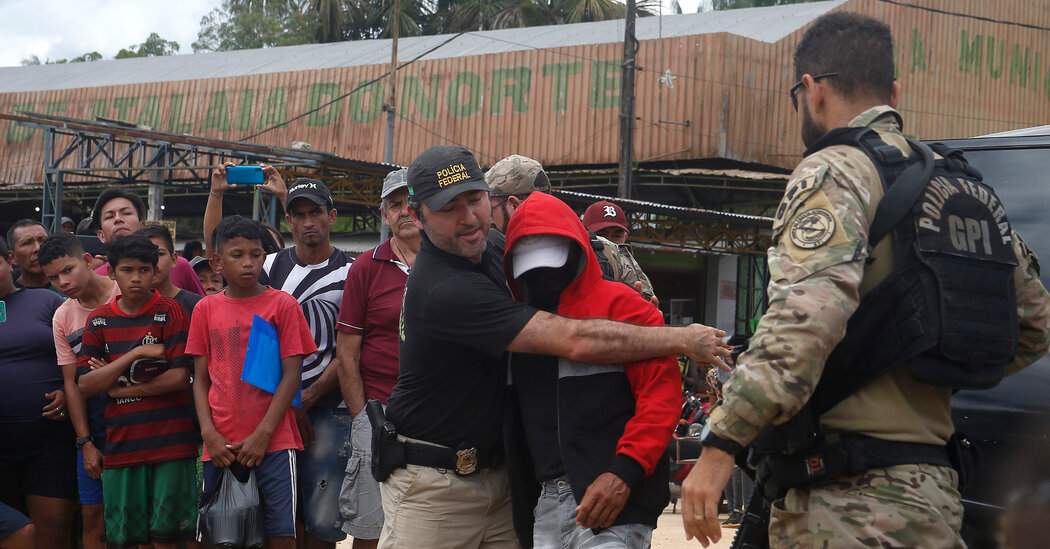 BRASÍLIA, Brazil — A fisherman confessed that he helped kill a British journalist and a Brazilian expert on Indigenous peoples and then went with the authorities to look for their bodies on Wednesday, according to the Brazilian federal police. It was a grim breakthrough in the 10-day search for the missing men deep in the Amazon that has transfixed Brazil and provoked international outrage.

As of Wednesday afternoon, however, the federal police said the bodies of the two men still had not been recovered.

One of the two brothers who was detained by the police in their investigation confessed to killing the missing men, said Tahuana Marques, a spokeswoman for the Brazilian federal police. Ms. Marques also confirmed that the federal police had taken a suspect on a boat to find the missing men’s bodies. It was unclear which of the suspects confessed.

The police led a man whose face was obscured by a hoodie onto a boat on Wednesday morning in Atalaia do Norte, a small city in the rainforest that has been the center of the investigation.

Dom Phillips, a freelance reporter for The Guardian, and Bruno Araújo Pereira, a former government official who worked in the area to combat illegal fishing and mining, disappeared on June 5 while traveling on the Itaquaí River in a remote area of the Amazon near the borders with Peru and Colombia.

Mr. Phillips was in the area to interview Indigenous patrol teams that have cracked down on illegal fishing and hunting. Mr. Pereira helped run those patrols, which for months had led to threats from illegal fishermen and hunters. Mr. Phillips was working on a book during the trip and the two men were headed home when they vanished.

The Brazilian federal police said on Tuesday that two brothers, Amarildo and Oseney da Costa de Oliveira, were being held as suspects in the murder investigation, although they have not yet been charged.

Witnesses saw the brothers in a boat behind Mr. Phillips and Mr. Pereira just before they were last seen, according to investigative documents from the Brazilian federal police viewed by The New York Times.

Amarildo da Costa de Oliveira had threatened Mr. Pereira in the past, according to the documents. A local association of Indigenous groups that helped organize the patrols said he also showed a gun to a group that included Mr. Pereira and Mr. Phillips the day before they disappeared.

Brazil has faced mounting international pressure to step up its response to the disappearance of the two men. In an exchange in Britain’s Parliament on Wednesday, Theresa May, the former prime minister, asked the government to make “this case a diplomatic priority” and to “do everything it can to ensure that the Brazilian authorities put the resources necessary to uncover the truth and find out what has happened to Dom and Bruno.”

The Amazon has for decades been ravaged by violence between people who want to develop the rainforest for profit and those who are trying to stop them. Amazonas state, where Mr. Phillips and Mr. Pereira went missing, has suffered increased deforestation in recent years and is among the forest’s most violent areas.

The Javari Valley is plagued by illegal fishing, hunting and mining, a problem exacerbated by government budget cuts under President Jair Bolsonaro. Now local Indigenous people have started formally patrolling the forest and rivers themselves, and the men who exploit the land for a living have responded with increasingly menacing threats.

About 6 a.m. on June 4, Mr. Phillips and Mr. Pereira were with a patrol, stopped along a snaking river, when another boat approached, according to officials at Univaja, a Javari Valley Indigenous association that helps organize the patrols. The approaching vessel carried three men known to be illegal fishermen, Univaja said, and as it passed, the men showed the patrol boat their guns. It was the kind of threat that Univaja had been recently reporting to authorities.

The following morning, Mr. Phillips and Mr. Pereira began their journey home, traveling on the Itaquaí River in a new boat with a 40-horsepower engine and enough fuel for the trip. They were scheduled to arrive in Atalaia do Norte, which is on the border with Peru, at about 8 a.m. on June 5.

The disappearance of Mr. Phillips and Mr. Pereira has sparked a global outrage and forced Mr. Bolsonaro to defend his government’s response to the crisis and his broader policies in the Amazon. Mr. Bolsonaro has said his government is working “tirelessly” to find Mr. Phillips and Mr. Pereira, but he has also tried to shift the blame to the two missing men.

On Wednesday, he said Mr. Phillips’ was disliked in this part of the Amazon because of his reporting on illegal activities and suggested it was “foolish” to go to the region unarmed.

“He should have been extra careful and he decided to go on an excursion,” Mr. Bolsonaro said. “We don’t know if someone saw him and went after him; there are pirates on the river, there’s everything you can imagine there.”