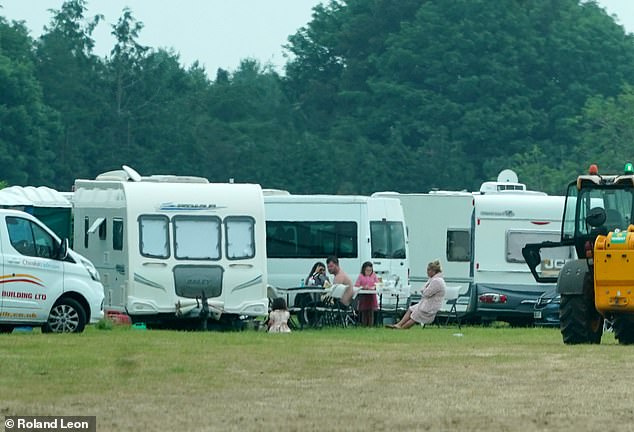 A genteel market town breathed a huge sigh of relief today as 2,000 gypsies from a Christian festival packed up and started to clear out after days of anti social behavior, drag races and looting.

Business owners in Oakham, Leicestershire, said they would finally re-open shops and restaurants after the travellers began to leave the Rutland Showground which had hosted the annual Light and Life Church convention since Saturday.

It comes after thugs ran amok and left traders too scared to open as thousands of people headed to the Christian music event.

Residents living near the site blamed travellers for brawling in pubs, abusing staff, shoplifting from Aldi and M&S and food fights at McDonalds.

Shops on Mill Street, which is lined with designer clothes stores, art dealers and restaurants, had remained largely shut or open by appointment only since Monday. 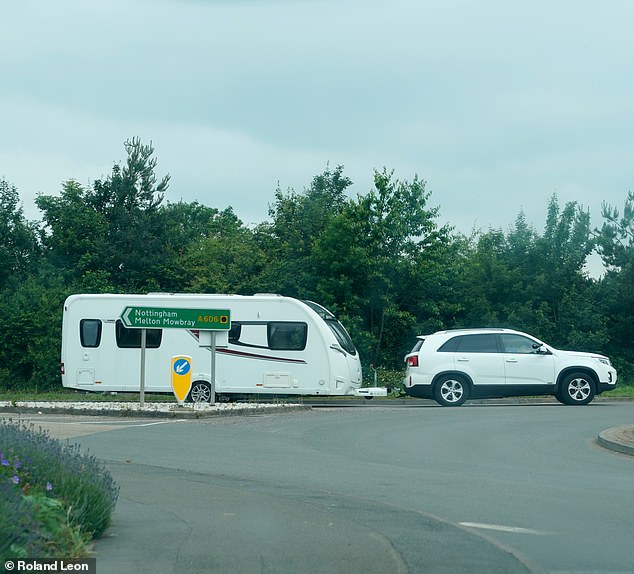 But gallery manager Suzie Beecroft said today: ‘It looks like we can finally open again after being closed all week.

‘It had been particularly galling to close our doors again because we’d only recently reopened after Covid but the gallery owners did not want to take any chances. I hope we can get back to normal as soon as possible.’

Others, including Cavells, a designer fashion store, and the Equilibrium beauty salon were open but only by appointment.

Selena Bailey, who owns Equilibrium, said: ‘I think the word I’d use is relief.

‘We were not prepared for the sheer volume of traffic and people we’ve had in town over the last couple of days.

‘There hasn’t been any major problems on Mill Street this week with any of those attending the fair but we felt we had to be cautious after the issues that other parts of the town had experienced over the weekend.

‘All this week I’ve been closed to everyone apart from those who had already booked appointments so hopefully by the weekend it’ll be business as usual.’

Clothing and jewellery store, Snapdragon, had been one of only a handful of businesses who remained open on Mill Street.

Owner Debbie Oakes said: ‘We have had a policy of only having two customers in at any one time and throughout Monday the door was locked so anyone wanting to come in had to knock first. 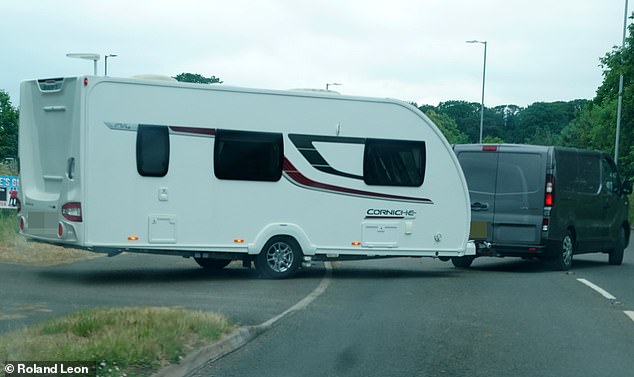 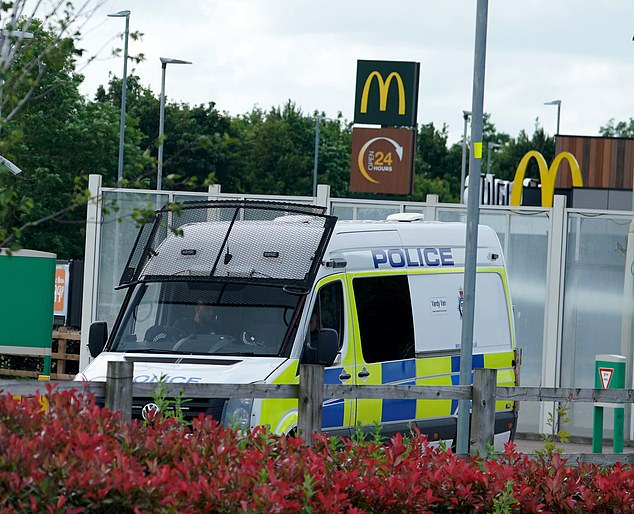 This weekend thugs ran amok and left traders too scared to open their stores. Pictured: A police van outside a McDonald’s near the Rutland Showground in Oakham

‘I have to say that we did feel a little vulnerable after the trouble at the weekend but we had no issues and so relaxed things yesterday and left the door open.

‘From what I’ve been told, the trouble on Saturday and Sunday was from travellers who aren’t really involved with the religious festival but who came into town on the back of it.

‘They’ve now gone fortunately and the Showground is beginning to thin out, although I’ve heard that there’s a big service tonight that some are attending especially.’

Groups of travellers are said to have started fights in the Captain Noel Newton, a large Weatherspoon’s pub, and at another bar called Jinky’s in the centre of Oakham.

McDonald’s was forced to close opposite the Showground after teenagers abused staff and began a food fight.

They are also said to have started playing football in the middle of a nearby Aldi supermarket and stole beer and wine from an M&S store.

Today one of the organisers of the festival, Jackie Boyd, apologised to businesses who had suffered but said traveller families who had come to worship at the event were not to blame.

He told MailOnline today: ‘Unfortunately we get a few groups who come along with no real interest in the religious aspect of the festival who have caused problems in the past.

‘We think some people arrived at the start of the event over the weekend who may have been responsible for some of the anti-social behaviour but they were gone by Monday.

‘In any case, how much of what went on is based on fact and how much is based in hysteria around travellers?

‘We invite Christians and non-Christians because we want to convert people and help change their lives.

‘I can tell you that the people here now and who have been here all week are decent, law abiding folk who have only come to worship God.

‘We have our own security that deal with any issues that arise day or night, we have fire marshals and litter pickers and we’ve had good dialogue with the local police force. Since Monday there hasn’t been any problems.

‘But I do understand the fear factor when thousands of gypsies and travellers meet up and I apologise to anyone who feels they have been threatened and to those shops or businesses that felt they had to close.

‘My advice would be to not fear us but embrace it, take advantage of the situation because we do want to spend money and boost the local economy.’

Mr Boyd also denied claims that organisers had hoodwinked the Rutland Showground by claiming only 30 people would attend the festival.

He said: ‘It’s nonsense, if that’s the case then why did we spend a lot of money hiring five fields and 240 portaloos? 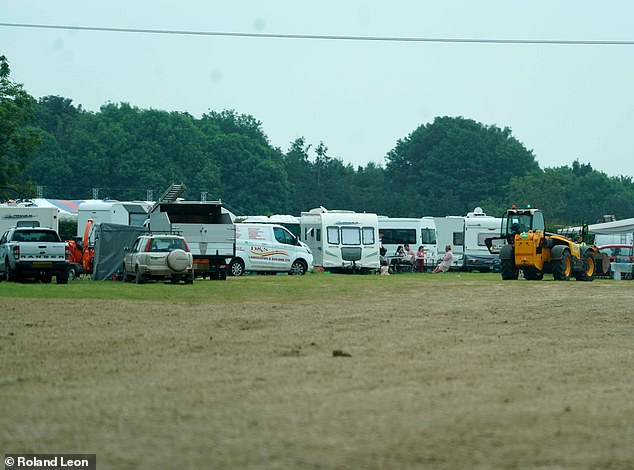 Residents living near the site blamed travellers for brawling in pubs, abusing staff, shoplifting from Aldi and M&S and food fights at McDonalds 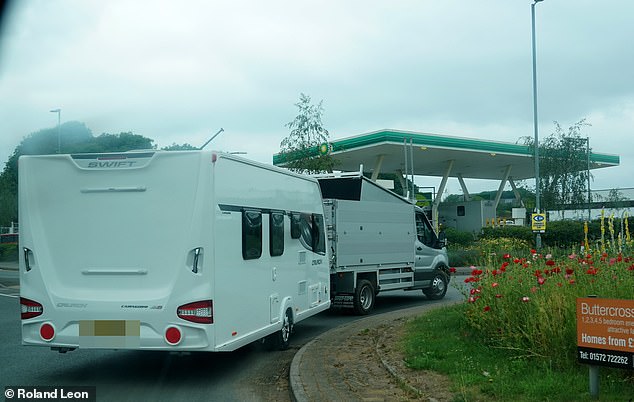 Security at the event said that on Monday there were as many as 700 caravans but that people had started to leave last night and this morning.

Leicestershire Police said they had made just two arrests over five days despite there being ‘considerable anti-social behaviour’ at the start of the event.

Superintendent Jonny Starbuck said: ‘Leicestershire police have been working closely with Rutland County Council and other partners to ensure the right plan is in place for the next few days and in particular the traffic management when the event goers leave the site.

‘Initially we received over one hundred calls to police in relation to this event, mostly these calls to police were to notify us that it was happening and ask us if we were aware of the event.

‘There was considerable anti-social behaviour reported and we have made two arrests.

‘Since the policing operation was put in place we have seen these calls to police drop to twenty.

‘We are aware of non-payment for food and shoplifting from local businesses and we are working with them to ensure the right action is taken. 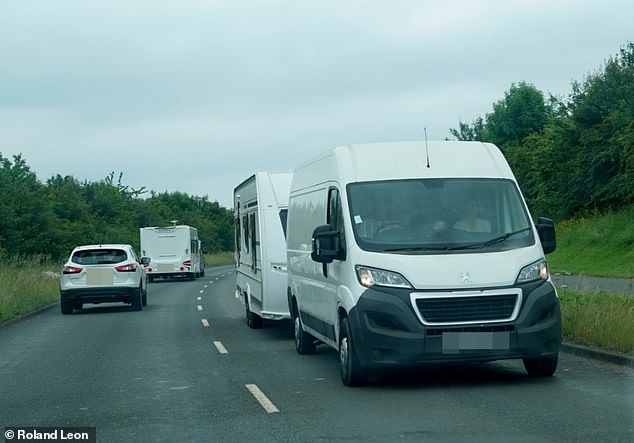 Today one of the organisers of the festival apologised to businesses who had suffered but said traveller families who had come to worship at the event were not to blame. Pictured: Caravans leave the Oakham site

‘Mainly, we have had reports of anti-social behaviour and a few reports relating to covid compliance.

‘We or our partners, have not advised any businesses to close – this is a decision for the retailers to make, taking into consideration what the right choice would be for their business.

‘I want to thank Rutland Council and our partners for all pulling together to provide the local community with the right support and reassurance.

‘We understand that anti-social behaviour can have a significant impact on the local community and I would like to thank them for working with us on this matter and I would encourage them to continue to report incidents to us.

‘Again, we want to stress that this is a legal event and the majority of the people visiting are there to enjoy their faith.

‘There are only a few who are determined to engage in this negative behaviour. We will deal with those who commit crime swiftly and robustly.’