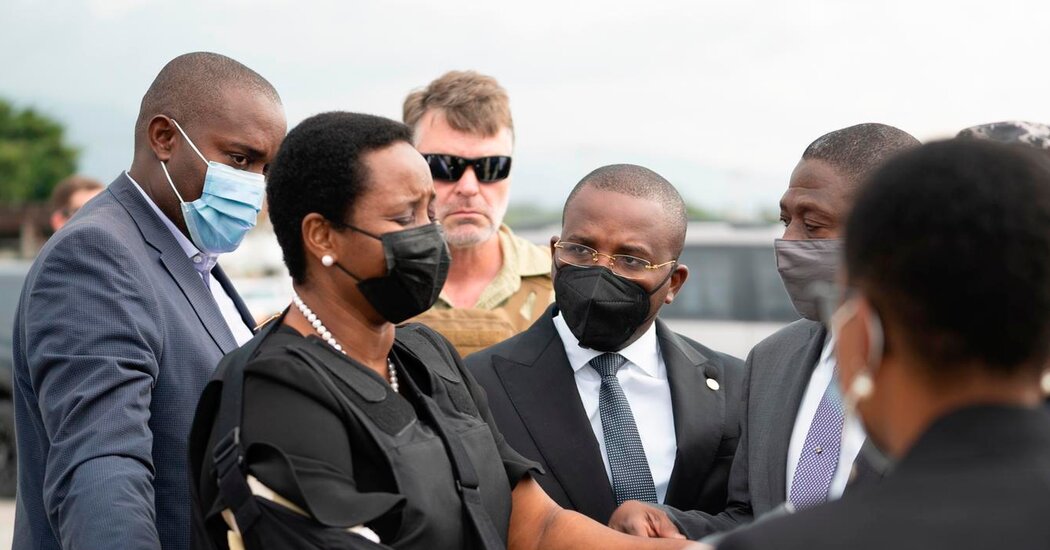 Four days after surprising Haitians by returning to her home country in a sling and a bulletproof vest, the widow of Haiti’s assassinated president appeared before her countrymen Wednesday at the site of a memorial to her husband.

Martine Moïse, who was wounded in the July 7 attack at her home that took the life of her husband, was medevacked to a hospital in Miami, where she underwent surgery as her country was reeling at the loss of its president, Jovenel Moïse.

Other than making a few statements on social media, Ms. Moïse had been staying out of the spotlight. But that changed on Wednesday.

The former first lady arrived in the late afternoon at the memorial site at the Museum of the Haitian National Pantheon, accompanied by her three children and three bodyguards, their assault weapons on full display. Ms. Moïse was dressed in black, and wore pearls, and Pachelbel’s Canon could be heard playing in the background.

As she stood with her children, she received condolences from prominent Haitians, among them the newly installed prime minister, Ariel Henry, and Helen La Lime, the United Nations’s top official in Haiti.

Even before she was discharged from the hospital, Ms. Moïse got a message to her countrymen, one that was both mournful and politically pointed.

“Twenty-five years of living together,” she said in an audio recording posted on her verified Twitter account. “In just one night, the mercenaries ripped him away from me. Tears will never dry up in my eyes. My heart will always bleed.”

As Haitian politicians back home skirmished for power, Ms. Moïse, accused her husband’s killers of wanting “to assassinate the president’s dream, vision and ideas for the country.”

On Tuesday, Ariel Henry, a neurosurgeon, was installed as the country’s interim prime minister, ending — temporarily at least — an open battle over who would replace Mr. Moïse to lead the fragile country. The ceremony occurred a few hours after a small memorial for the president.

The funeral is set for Friday in the northern city of Cap-Haïtien. Ms. Moïse put out a communiqué on her Twitter account, stating that her family intended to pay for the ceremony themselves, and didn’t want to take from Haiti’s public treasury.

Some Haitians have already voiced hopes that Ms. Moïse might step into her husband’s shoes and take over the leadership of the country.