Men Missing in Amazon Faced Threats Before They Disappeared 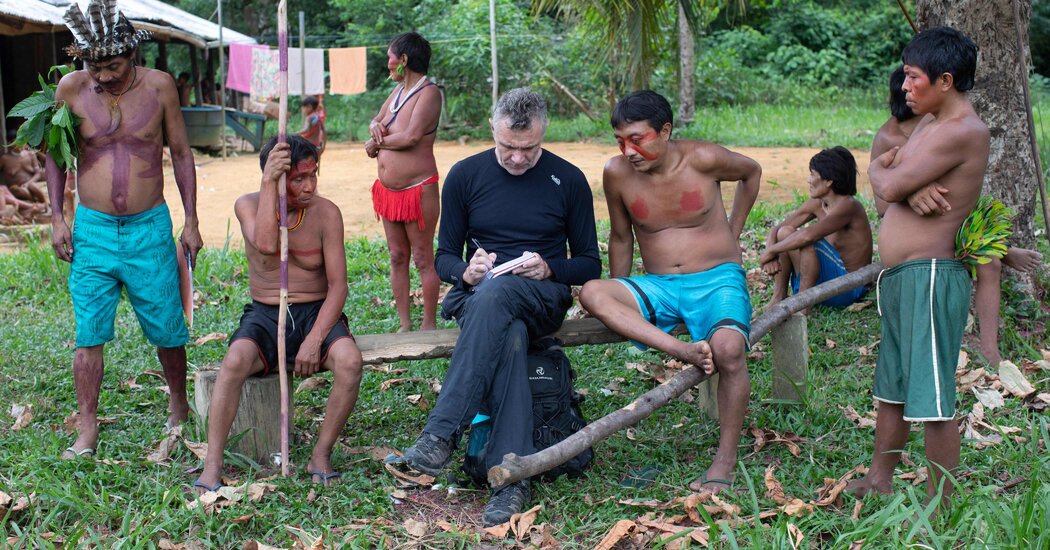 RIO DE JANEIRO — The Javari Valley in the Amazon rainforest is one of the most isolated places on the planet. It is a densely forested Indigenous reserve the size of Maine where there are virtually no roads, trips can take a week by boat and at least 19 Indigenous groups are believed to still live without outside contact.

The reserve is also plagued by illegal fishing, hunting and mining, a problem exacerbated by government budget cuts under President Jair Bolsonaro. Now local Indigenous people have started formally patrolling the forest and rivers themselves, and the men who exploit the land for a living have responded with increasingly dire threats.

That tension was the kind of story that has long attracted Dom Phillips, a British journalist in Brazil for the past 15 years, most recently as a regular contributor to The Guardian. Last week, Mr. Phillips arrived in the Javari Valley to interview the Indigenous patrols for a book. He was accompanied by Bruno Araújo Pereira, an expert on Indigenous groups who had recently taken leave from the Brazilian government in order to aid the patrols.

About 6 a.m. Saturday, the two men were with a patrol, stopped along a snaking river, when another boat approached, according to officials at Univaja, a Javari Valley Indigenous association that helps organize the patrols. The approaching vessel carried three men known to be illegal fishermen, Univaja said, and as it passed, the men showed the patrol boat their guns. It was the kind of threat that Univaja had been recently reporting to authorities.

The following morning, Mr. Phillips, 57, and Mr. Pereira, 41, began their journey home, traveling on the Itaquí River in a new boat with a 40-horsepower engine and enough fuel for the trip. They were scheduled to arrive in Atalaia do Norte, a small city on the border with Peru, at about 8 a.m. Sunday.

The men and their boat have not been seen since.

Over the past three days, various search crews, from Indigenous groups to the Brazilian Navy, have scoured the area; Brazilian politicians and celebrities have called for more action to find the men; and their disappearance has led the morning newspapers and nightly news across the country.

On Tuesday night, state police officials said they were questioning a suspect and inspecting his boat. The suspect was one of the fishermen who showed the patrol their guns on Saturday, according to Soraya Zaiden, an activist who helps lead Univaja, and Elieseo Marubo, Univaja’s legal director. They said the man had shot at a Univaja patrol boat months earlier. State authorities declined to comment on the suspect.

“We will continue the search,” Ms. Zaiden said. “But we also know that something serious, very serious, may have happened.”

Mr. Phillips, who also wrote regularly for The New York Times in 2017, has dedicated much of his career to documenting the struggle between the people who want to protect the Amazon and those who want to exploit it. Mr. Pereira has spent years defending Indigenous groups under the resulting threat. Now fears are growing that their latest journey deep into the rainforest could end up as one of the grimmest illustrations of that conflict.

Univaja said that Mr. Pereira “has profound knowledge of the region,” and local officials said that if the men had gotten lost or faced mechanical issues, they likely would have already been found by search crews. Univaja said Mr. Pereira had long faced threats in the region.

Violence has long been common in the Amazon, but it has largely been between locals. From 2009 through 2020, there were 139 killings of environmental activists and defenders in the Amazon, according to data compiled by a journalism project called Tierra de Resistentes. But hardly any of those attacks were against Brazilian government officials or journalists who were outsiders in the region.

In 2019, a Brazilian government worker was shot and killed in apparent retaliation for his work combating illegal activity in the Javari Valley.

The 1988 murder of Chico Mendes, Brazil’s most famous conservationist at the time, helped spark an environmental movement in the country to protect the Amazon. That movement has faced significant headwinds lately, particularly under Mr. Bolsonaro, who has vowed to open the Amazon to mining, logging and other industry.

Deforestation has increased during his presidency, as his government has weakened many of the institutions designed to protect the forest.

On Tuesday, Mr. Bolsonaro said he prayed that Mr. Phillips and Mr. Pereira would be found. He also questioned their journey. “Two people in a boat, in a completely wild region like this, is an adventure that isn’t recommendable,” he said. “An accident could happen, they could have been executed, anything.”

Politics also cast a shadow over the government’s response, which many politicians, journalists and other public figures widely criticized as inadequate and slow.

Ms. Zaiden said that Univaja alerted federal authorities to the men’s disappearance midday Sunday. It then took a full day for Brazil’s Navy to send a search team, which consisted of a single boat, when an aircraft would have been far more effective and efficient for searching such a vast, remote area.

By Monday evening, the army said it was still awaiting authorization from the “upper echelons” of the Brazilian government to join the search, before eventually saying it was sending a team.

“We still have some hope,” she said. “Even if we don’t find the love of my life alive, they have to be found, please. Intensify these searches.”

On Tuesday, the navy and army said they had deployed aircraft, as well as additional boats in the search. The Ministry of Defense said that the armed forces started assisting the search “as soon as the first information about the disappearance was released.” On Wednesday, a Brazilian judge ruled that the government had failed to protect the reserve and must use aircraft and boats to search for the missing men.

Mr. Phillips and Mr. Pereira knew each other well. In 2018, Mr. Phillips joined a 17-day journey led by Mr. Pereira deep into the Javari Valley — 590 miles by boat and 45 miles on foot — for a story about the Brazilian government’s search for signs of isolated Indigenous groups. “Wearing just shorts and flip-flop as he squats in the mud by a fire,” Mr. Phillips wrote in The Guardian, Mr. Pereira “cracks open the boiled skull of a monkey with a spoon and eats its brains for breakfast as he discusses policy.”

At the time, Mr. Pereira helped lead the government’s efforts to identify and protect such groups. After Mr. Bolsonaro became president in 2019, Mr. Pereira’s department faced cuts and shifting orders from the top, said Antenor Vaz, a former official in the department, stopping them from carrying out the expeditions once critical to protecting the reserve.

“It is a region that is extremely dangerous, especially since 2019 when the illegal actions of loggers, prospectors, fishermen and hunters surged,” Mr. Vaz said.

Mr. Pereira eventually took a leave from his post to help Indigenous groups in the Javari Valley fill the vacuum of enforcement. Those patrols have focused in part on documenting and reporting fishermen who illegally catch pirarucu, a freshwater fish that can weigh as much as 440 pounds and is considered endangered in Brazil.

As the Indigenous patrols organized by Univaja became a front line of enforcement in the Javari Valley, they began to face threats. In April, one man accosted several Univaja workers, telling one that if he didn’t stop reporting illegal activity, “he’d put a bullet in his face,” according to a police report that Univaja filed with local authorities.

Ms. Zaiden shared a letter Univaja received that threatened Mr. Pereira by name, accusing him of sending Indigenous people to “seize our engines and take our fish.” The letter added, “I’m just going to warn you once that if it continues like this, it will get worse for you.”

She said the organization had reported many of the threats to local authorities, asking for help. Marcelo Ramos, a congressman from the region, said that he had confirmed with federal authorities that the group had reported threats within the past week.

“We’ve been demanding action, but unfortunately there’s been no reaction,” Ms. Zaiden said. “Now our greatest fear is that this is the reason for Bruno and Dom’s disappearance.”

Brett Kavanaugh: Armed man who wanted to kill US Supreme Court justice arrested near his house in Maryland | US News