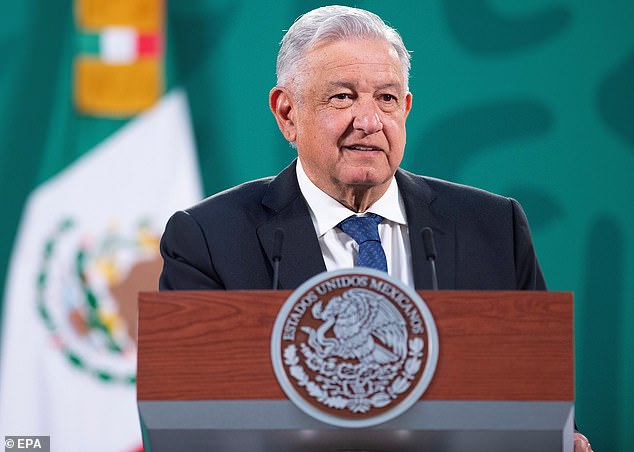 ‘And this has caused Central American migrants, and also from our country, wanting to cross the border thinking that it is easier to do so,’ López Obrador said. ‘People don’t go to the United States for fun, they go out of necessity.’

López Obrador’s comments came after meetings Tuesday between U.S. officials and their Mexican counterparts, as they discussed immigration and regional development.

Mexico’s President Andrés Manuel López Obrador blamed President Joe Biden for setting ‘expectations’ migrants would be treated better. ‘And this has caused Central American migrants, and also from our country, wanting to cross the border thinking that it is easier to do so’ 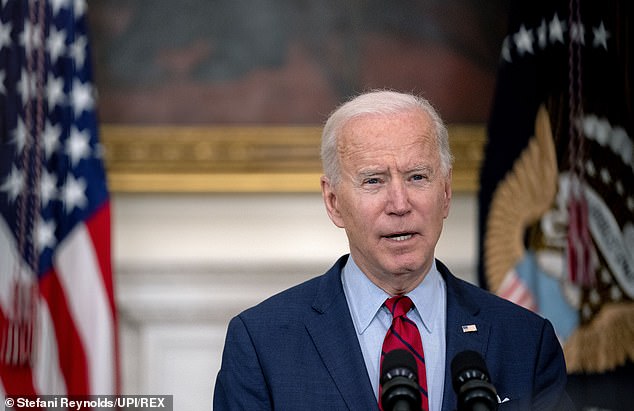 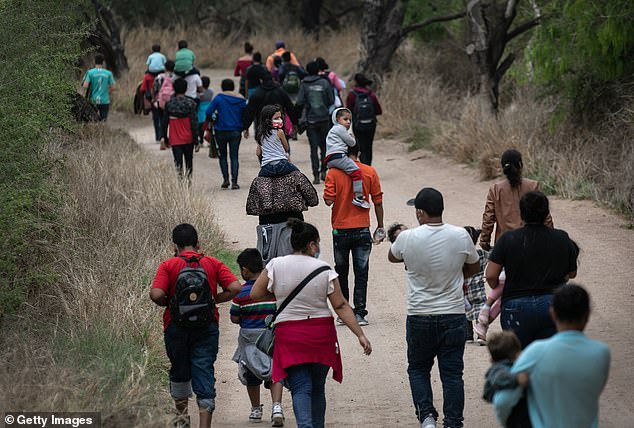 The so-called Northern Triangle countries of Guatemala, Honduras and El Salvador have been the largest source of migrants arriving at the U.S. southern border in recent years. These migrants from Honduras walk toward a U.S. border checkpoint after crossing the Rio Grande

Former U.S. ambassador Roberta Jacobson, the White House’s lead adviser on the border, and Juan González, the National Security Council’s senior director for the Western Hemisphere, were accompanied by Ricardo Zúñiga, the newly named Special Envoy for the Northern Triangle.

The Biden administration has started to dismantle Trump-era policies that made it more difficult for asylum seekers, but have maintained some like the pandemic-related policy invoked by Trump that allowed it to continue to return the majority of border crossers to Mexico.

In a meeting with Mexico Foreign Affairs Secretary Marcelo Ebrard, the two delegations discussed ‘humanitarian actions to spur, in the short term, an inclusive economic development in northern Central America,’ according to a statement released by the Mexican government.

Ebrard later emphasized the shared goal of development in the region to address migration.

‘If we persevere and act together … we can achieve that these countries and southern Mexico have a different future, have other possibilities,’ he said. ‘That no one has to migrate due to poverty, insecurity, desperation.’

The so-called Northern Triangle countries of Guatemala, Honduras and El Salvador have been the largest source of migrants arriving at the U.S. southern border in recent years.

Plagued by endemic corruption and violence, and more recently devastated by two major hurricanes in November and the economic impacts of the COVID-19 pandemic, migrants continue to stream out of those countries.

Confusion and misinformation over Biden’s seemingly more humane approach to immigrants and asylum seekers has been a contributing factor. Many migrants sensing a change in attitude from the heavy-handed Trump policies set out during the first months of the year to try their luck.

Jacobson took the opportunity to again try to send a clear message to those thinking about migrating to the U.S. ‘Don´t come to the border. The border is closed,’ Jacobson said in Spanish in a message released by the U.S. embassy in Mexico.

She noted the danger of migrant smugglers and of traveling during the pandemic. ‘Stay at home, stay safe and wait for more information about the asylum process.’

Mexico finds itself once again under pressure to slow the movement of migrants across its territory.

Last week, the government announced it was imposing new measures at its southern border that would permit only essential crossings due to pandemic concerns.

But coming a year after the start of the pandemic many observers saw it only as a cover for more immigration enforcement.

At the same time, Mexico deployed more immigration agents to the south and said it would focus on intercepting unaccompanied children and families with children trying to reach the northern border.

That announcement was criticized for coming on the same day that the U.S. agreed to send COVID-19 vaccine to Mexico.

In 2019, Mexico deployed its newly created National Guard to bolster immigration enforcement under pressure from the Trump administration, which had threatened crippling tariffs on all Mexican imports.

Mexico has faced criticism for essentially extending U.S. immigration policy to its own southern border.

In return, Mexico has pushed the U.S. government to support more development projects in the region.

Biden has spoken of sending $4 billion in development aid.

Both sides they were focused on protecting the human rights of migrants, but ensuring a safe and orderly migration.

Ultimately, they want to reduce the push factors driving migrants from their countries.

The focus has been on economic factors, but yet to be seen is how the new U.S. administration will address touchier subjects like corruption in the region.

Gladys McCormick, an associate professor in history at Syracuse University’s Maxwell School of Citizenship and Public Affairs, said that while the Biden administration was employing a more diplomatic approach than Trump did, the U.S. delegation came in wanting ‘to have the Mexicans do some of their dirty work, which is yet again to stop the flow of people coming in on the southern border.’

The situation is also an opportunity for López Obrador to extract more from the United States, she said.

More help in facing the pandemic is one thing López Obrador already said he asked of Biden.

Additional resources to help Mexico deal with the migrants gathering at their shared border could be another, McCormick said.

It is also a welcome distraction for López Obrador, McCormick said, noting that organized crime and the economic havoc caused by the pandemic weren’t mentioned in Mexico’s statement.

‘[López Obrador] needs this as a way sort of to deflect attention from what´s going on in Mexico now, especially in the lead up to the mid-term elections this summer,’ she said.

Part of the U.S. delegation was scheduled to hold meetings in Guatemala Wednesday.

Experts savour £4,000 bottle of wine that spent a year in space – and reveal what it tastes like | World News