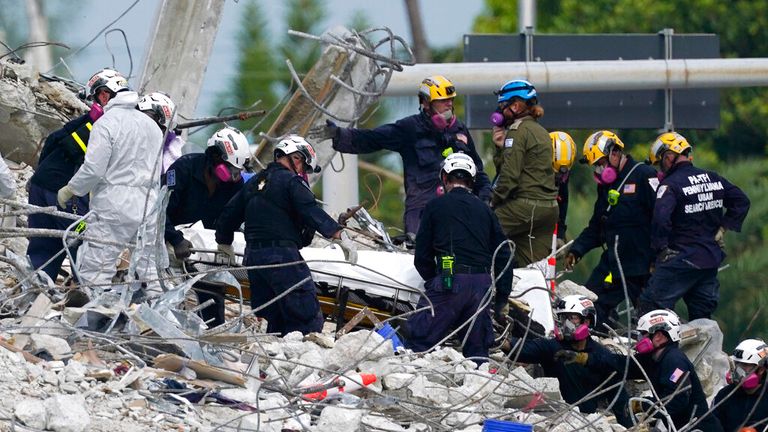 Eight more people have been confirmed dead in the Florida apartment block collapse – taking total deaths to 36, while 109 residents are still missing.

Emergency teams appear increasingly pessimistic of finding any more survivors among the rubble and say they have detected no new signs of life since the immediate aftermath.

Miami-Dade County fire chief Alan Cominsky said they were still searching “as aggressively as we can” nearly two weeks after the 12-storey Surfside block collapsed.

The search is expected to carry on despite the approach of Hurricane Elsa, as Surfside is forecast to avoid the worst of the weather.

Concerns the remains of the tower could be brought down by the storm prompted a controlled demolition a few days ago.

It also opened up a larger search area, including bedrooms where people were believed to have been sleeping when the tower came down on 24 June.

The eight bodies recovered on Tuesday was the greatest number to be found in a single day so far, but more than 100 people who were in Champlain Towers South remain unaccounted for.

Some 112 tonnes of debris have been removed, according to Fire Chief Cominsky, and are being stored in a warehouse in case it’s needed as evidence in the investigation.

The first funerals of the victims were also held on Tuesday – for a family of four killed in the disaster.

They were described as a close family who enjoyed walking on the beach and doing other simple things together.

He’s Heir to the Jumex Empire, but His Main Focus Is Art