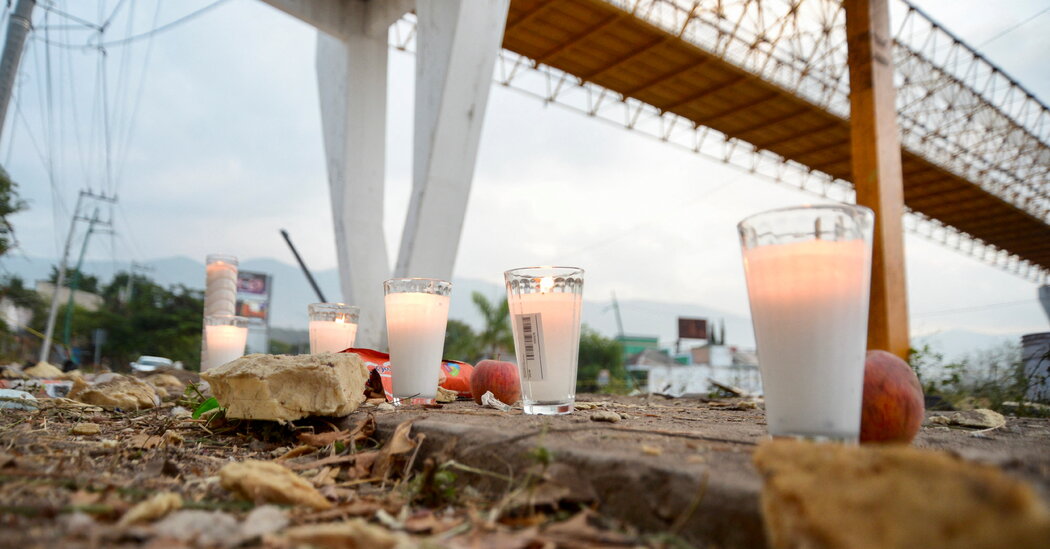 TUXTLA GUTIÉRREZ, Mexico — The first thing the paramedic saw was the overturned truck, its trailer torn to pieces. Then there was the vomit, the puddles of blood, the dust coating the bodies of migrants piled atop one another in the southern Mexico heat.

“Everyone that was inside was dead,” said the paramedic, Luis Eduardo Hernández Trejo, 21, one of the first to arrive at a horrific crash that killed at least 54 migrants. “They were all cadavers.”

The migrants, mostly from Guatemala and apparently heading for the United States, were crammed like sardines into a tractor-trailer that overturned on a highway in Chiapas state Thursday afternoon and slammed into a pedestrian bridge, crushing occupants in a pile of the living and dead. It was one of the worst accidents to befall migrants transiting Mexico. The precise cause of the crash remained unclear.

Realizing the severity, Mr. Hernández said in an interview on Friday, he called for backup and quickly got to work trying to identify the wounded who needed the most urgent help among those with less severe injuries.

At least 106 people were hospitalized with injuries as of Friday, the Mexican authorities reported. But the total number of occupants in the tractor-trailer remained unclear. Some survivors, bleeding and limping, fled the scene to avoid possible arrest by the immigration police in Chiapas, which borders Guatemala.

The accident revealed in graphic clarity the increasingly perilous journey that people from across Latin America endure to reach the United States border, risking ruthless criminal cartels, corrupt police officers and hostile terrain for the chance at a better life.

After helping with the triage, Mr. Hernández said he was called over by an immigration official to treat a migrant who had tried to flee into a nearby house but had begun feeling ill.

“He had the signs of being in a state of shock,” Mr. Hernández said.

Two other young migrants had tried to flee the scene toward a nearby river, one of them with a cut on his head.

“He was scared,” Mr. Hernández said. “He thought we were with the government.”

He also recalled seeing a young mother with her infant son sitting by the roadside, blood streaming from a head wound. The baby, who survived, was the only infant on the truck, according to Mr. Hernández, although there were some teenagers onboard as well.

Nearby residents offered support, he said, bringing supplies like cotton balls and alcohol to help the paramedics treat the wounded.

“It was a tragic incident,” Mr. Hernández said. “The people were trying to get to the United States for a better life.”

“It’s inevitable to feel people’s pain,” he added. “But you can’t let that get to you.”

Heavily armed National Guard troops surrounded the crash site Friday morning, the twisted debris from the upturned truck and the bodies of victims long removed. The only telltale signs of the previous day’s tragedy were red streaks of dried blood on the road and a makeshift memorial of candles and flowers.

With the death toll likely to climb, the crash may also have political implications, underscoring the desperate and dangerous measures migrants are taking, even as governments in both Mexico and the United States attempt to stop the flow northward.

The U.S. government has in recent years implemented a series of policies taking a harsher approach to deterring migrants. Officials in the Biden administration have repeatedly and explicitly told them not to come.

“I am saddened to see the tragic loss of life and injuries of migrants traveling in Chiapas,” said U.S. ambassador Ken Salazar on Twitter on Thursday night. “Human smugglers disregard human life for their own profit. Please don’t risk your lives to migrate irregularly.”

Under former President Donald J. Trump, Washington began immediately returning many detained migrants under an obscure health code known as Title 42, while also forcing asylum seekers to wait in Mexico for their cases to be decided in U.S. courts, a program known as Remain in Mexico. Both policies have been continued under the Biden administration.

The U.S. government also has increasingly relied on Mexico to detain and deport migrants. As of October, the Mexican authorities had detained more than 220,000 undocumented migrants, the highest number on record.

The efforts from both sides of the border have had some impact: apprehensions at Mexico’s northern border, which reached a record high earlier this year, have begun tapering off.

However, as governments ramp up deterrence efforts, migrants have sought out increasingly dangerous means to evade the checkpoints set up by Mexican officials, paying smugglers steep prices to be crammed inside trucks and trailers and gain a greater possibility of avoiding detection.

This year has already been the deadliest for migrants at the U.S. border since 2014, according to the International Organization for Migration, which said this week that 650 people had died trying to cross so far in 2021 — the highest toll since the I.O.M. began keeping records.

The Chiapas crash caused the worst known single-day death toll for migrants in Mexico since the 2010 massacre of 72 migrants by the Zetas drug cartel in the northern state of Tamaulipas.