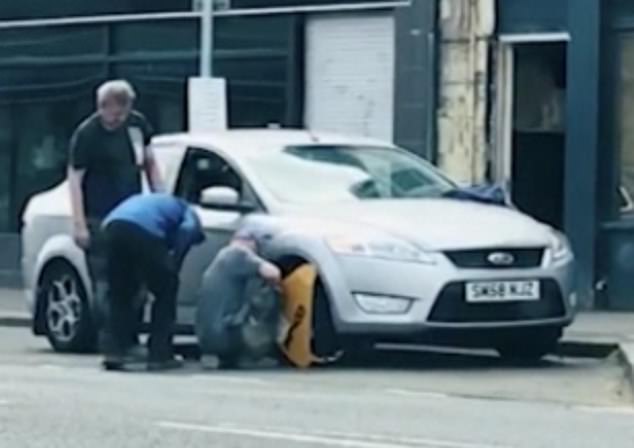 By Vivek Chaudhary For Mailonline

This is the moment three men remove a wheel clamp on a busy high street.

The footage was captured by an astonished onlooker who initially saw the work men examine a yellow DVLA clamp that had strapped around the front right hand side tyre of their car.

After wrestling with the clamp, one of them successfully manages to prise away the face of it but then realises that he cannot remove it all together as he struggles to reach behind the tyre to completely detach it.

As traffic flowed along a busy road in the centre of Inverkeithing, Scotland, just north of Edinburgh, one of his pals then goes to a room above a bar, where the three men had been working and passes down an extension lead through a window.

Seconds later, another pal emerges with what appears to be an angle grinder, causing sparks to fly as he sets about cutting through the clamp without a care in the world as his two associates watch on.

Minutes after setting about the clamp, he successfully manages to cut through it. After pulling it off, he carefully places it in the boot looking pleased with himself at a job well done.

Removing the clamp, from start to finish, took an estimated 20 minutes. The trio then jump into their car and gently pull away as if nothing had happened.

The onlooker told MailOnline: ‘I was parked opposite and couldn’t believe what I was seeing.

An astonished onlooker captured the moment a group of men used an angle grinder to cutting through a DVLA clamp on their car on a busy high street in Inverkeithing, Scotland.

‘These three men were removing the clamp on a busy road and didn’t seem to care that they were doing something illegal.

‘Not only did they cause criminal damage, to what is Government property, but they committed theft because they took the clamp with them.’

The onlooker added: ‘It was as if they were just doing their normal work and they seemed very happy with themselves when they eventually got the clamp off.’

Edinburgh and surrounding areas are being targeted by the DVLA under its ‘tax it or lose it’ scheme, which aims to remove from the road vehicles that do not have road tax. 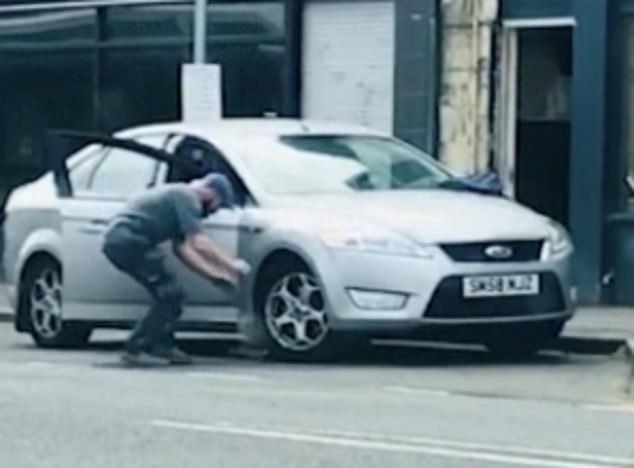 The onlooker added: ‘It was as if they were just doing their normal work and they seemed very happy with themselves when they eventually got the clamp off’

The city has been identified as one of the country’s hotspots for unlicensed vehicles with an estimated 24,000 DVLA enforcement actions taken last year.

The cameras can rapidly run the details of any motor that it snaps against a database to find out if it is being driven without tax.

The teams take immediate action by clamping vehicles and it is illegal to remove them until a fine has been paid.