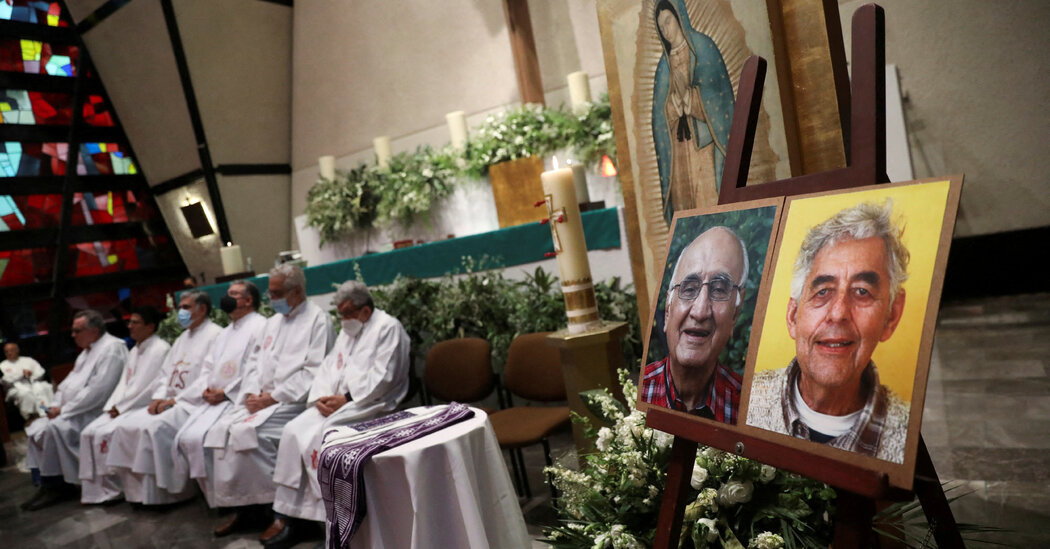 MEXICO CITY — The murder of two Jesuit priests inside a church in Mexico this week stunned a country where frustration had been building for years over the government’s failure to stem a deluge of killing.

But this time, the government faces pointed criticism from one of the nation’s most powerful institutions, the Roman Catholic Church, amplifying the public outcry.

The conference of Mexican bishops urged the government on Thursday to “revise the security strategies, which are failing.” Rectors of Jesuit universities slammed the government’s inability to wrest control away from criminals, with one calling Mexico “a failed state” where “the law of the jungle” prevails.

Even Pope Francis, a Jesuit from Argentina, said in his weekly audience from the Vatican that he was “dismayed” by the attack. “How many killings there are in Mexico!” he posted on Twitter.

The homicide rate in Mexico is near its highest level in decades. Nearly 100 people are murdered every day. Beach vacationers have been slain at resorts, mourners at funerals and women in bars.

Still, the killing of two priests known for serving the rural poor in the northern state of Chihuahua shook a deeply Catholic society where religious leaders have generally been spared the brunt of the brutality.

The attack, in which a tour guide was also killed, may eventually be remembered as a signal moment in Mexico’s long struggle with violence, or as just another unspeakable horror.

But the outcry from the Catholic Church, a moral authority, has at least for now handed President Andrés Manuel López Obrador a challenge he isn’t accustomed to: a critic he cannot easily dismiss.

“When tourists are killed in Cancun or women are killed in Monterrey, the Pope doesn’t weigh in,” said Alejandro Hope, a security analyst in Mexico City. “Now, the frustration is being led by a sophisticated and socially entrenched institution, with powerful international connections.”

Mr. López Obrador has called the murders “unacceptable” and promised a thorough investigation into the matter, sending soldiers to Chihuahua to search for the perpetrator said to be responsible.

Still, the president, who tends to lash out at his perceived adversaries, has been careful not to denigrate Catholic leaders. He also has not claimed, as he has in the past, that the violence in this case was driven by criminals killing each other.

“This is one instance where it is outright impossible to blame the victims,” Mr. Hope said.

When asked whether his security strategy should change, Mr. López Obrador insisted at a news conference on Thursday that his government was on the right track, and blamed his predecessors for the bloodshed in Mexico.

“All this is the rotten fruit of a policy of corruption, of impunity, which has been implemented since the time of Felipe Calderón,” the president of Mexico from 2006 to 2012, he said.

Hours later, the Catholic bishops conference released a pointed statement on Twitter saying “it’s not useful to deny reality, nor to blame the past for what we have to resolve now.”

Mexico’s homicide rate tripled in the dozen years before Mr. López Obrador took office in 2018, and he was determined to break from endless wars on drug cartels, instead focusing on giving young people economic alternatives to organized crime. “Hugs, not bullets,” his slogan promised.

But that plan hasn’t panned out, and a little over halfway through his tenure, Mr. López Obrador has already presided over more than 120,000 homicides.

The priests, Javier Campos, 79, and Joaquín Mora, 80, were shot on Monday while trying to help a local tour guide who had sought refuge in their church in Cerocahui, a tiny town in the mountains of Chihuahua, according to local authorities. The guide, Pedro Palma, was being pursued by a local criminal who shot all three men inside the church and took their bodies away; they were found two days later.

It was the latest in a spate of killings in which the victims were well-known figures in their communities, including social activists and especially journalists.

“For most criminal organizations, in the past there was a general golden rule that you need the community on your side,” said Falko Ernst, a senior analyst for the International Crisis Group. “You want to provide state and local government with the narrative that things aren’t completely burning in your area.”

But criminal groups in Mexico have increasingly used a business model based on controlling certain territories and extorting the people who live there. “There’s mounting evidence that a lot of criminal actors are testing the waters to see what they can get away with,” in terms of killing social leaders, Mr. Ernst said.

Impunity is the rule in Mexico, and with few consequences for taking a life, criminals have become increasingly emboldened about whom they target.

The Chihuahua state prosecutor’s office said the suspected killer of the priests is José Noriel Portillo Gil, known as “El Chueco,” who is linked to organized crime and, according to Mr. López Obrador, is wanted for the murder of an American tourist in 2018.

Mr. Portillo was also involved in the killing of a human-rights activist in Chihuahua in 2019, according to local media.

“He is a very bloodthirsty man,” said Isela González, an environmental activist in Chihuahua.

Local authorities say that Mr. Portillo had been on a violent rampage in the hours leading up to the killing inside the church. Earlier that day, they said, he was involved in a dispute over a recent baseball match, in which a team he sponsored had lost. According to witness testimony, Mr. Portillo kidnapped two brothers who played for the opposing team, after shooting one of them, and set their house on fire. Both men are still missing.

The prosecutor’s office offered a reward of about $250,000 for any information leading to Mr. Portillo’s capture.

Luis Arriaga Valenzuela, rector of the Jesuit Ibero-American University in Mexico City, said in an interview that the attack was “a paradigmatic case” that “exemplifies the serious shortcomings of a failed security system.”

“They dedicated their whole lives to serving the poorest communities,” he said. “They were men of unbreakable faith.”

Roe v Wade: From ‘angry and disgusted’ to ‘overjoyed’ – how women outside the Supreme Court reacted to the ruling | US News