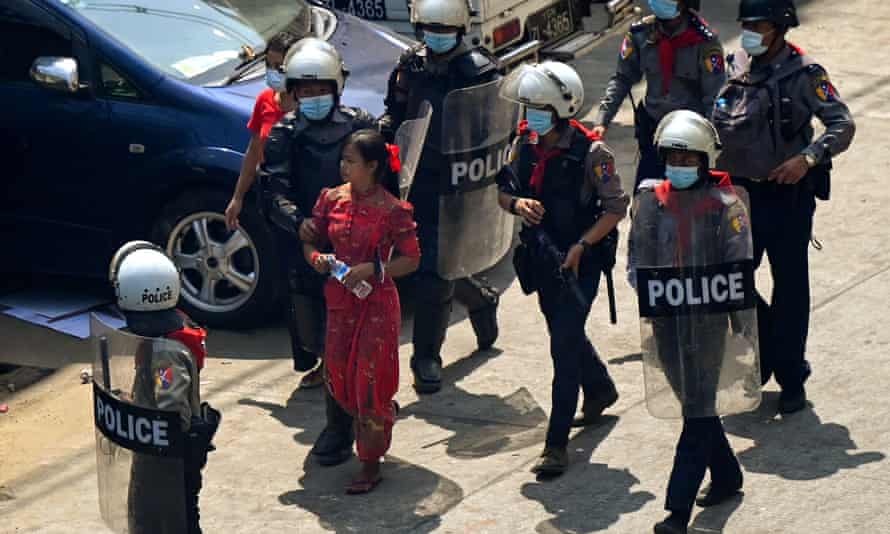 Myanmar’s ambassador to the United Nations has appealed to the organistation “to use any means necessary to take action against the Myanmar military” to restore democracy to the south-east Asian country.

As the military stepped up its use of force to stamp out pro-democracy protests in Myanmar on Saturday, Kyaw Moe Tun addressed the general assembly in New York after secretary general António Guterres’ special envoy on Myanmar, Christine Schraner Burgener, warned that no country should recognise or legitimise the Myanmar junta.

“We need further strongest possible action from the international community to immediately end the military coup, to stop oppressing the innocent people, to return the state power to the people and to restore the democracy,” said Kyaw Moe Tun to applause and praise from western and Islamic counterparts.

Police were out in force early in the main city of Yangon and elsewhere on Saturday, deployed at usual protest sites and detaining people as they congregated, witnesses said.

People still gathered, their numbers building through the morning, to chant and sing, then melting away into side streets as police advanced, apparently setting off stun grenades and firing into the air.

Similar scenes played out in the second city of Mandalay, and elsewhere, media reported. A protester in the central town of Monwya said police had fired water cannon as they surrounded a crowd.

“They’ve blocked all the ways out,” Aye Aye Tint told Reuters from the town. “They used water cannon against peaceful protesters, they shouldn’t treat people like that.”

In his emotional address at the UN on behalf of the ousted civilian government on Friday night, Kyaw Moe Tun said the leaders represented the country’s legitimate government. He ended with a three-fingered salute used by protesters.

Schraner Burgener pushed for a collective “clear signal in support of democracy” as she sounded the alarm over the coup, urging “influential” countries to push the military to allow an independent assessment of the situation.

Myanmar has been in turmoil since the army seized power and detained the civilian government leader, Aung San Suu Kyi, and much of her National League for Democracy (NLD) party after the military complained of fraud in a November election.

“Regrettably, the current regime has so far asked me to postpone any visit. It seems they want to continue making large-scale arrests and have been coercing people to testify against the NLD government. This is cruel and inhumane,” Schraner Burgener said.

The country has been largely paralysed by weeks of protests and a civil disobedience campaign of strikes against the military. While the military chief, Gen Min Aung Hlaing, says authorities are using minimal force during the protests, three protesters and one policeman have been killed.

“If there is any escalation in terms of military crackdown – and sadly as we have seen this before in Myanmar – against people exercising their basic rights, let us act swiftly and collectively,” Schraner Burgener said.

The army has promised an election, but has not given a date. It has imposed a one-year state of emergency.

“It is important the international community does not lend legitimacy or recognition to this regime,” Schraner Burgener said. “The result of the election of November 2020 was clear with 82 % of the votes for the NLD.”

Guterres has pledged to mobilise enough international pressure “to make sure that this coup fails”. The security council has voiced concern over the state of emergency, but stopped short of condemning the coup.

The US ambassador to the United Nations, Linda Thomas-Greenfield, said: “We urge every member state here today to use any channel available to tell the military that violence against the people of Myanmar will not be tolerated. Together we all show the people of Myanmar that the world is watching. We hear them and we stand with them.”

Russia said other nations should not intervene in the “exclusively internal process” of Myanmar.