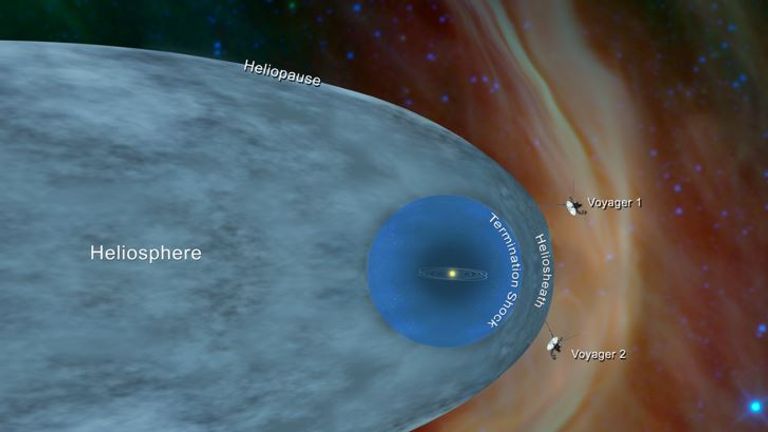 After more than 44 years of travelling farther from Earth than any man-made objects have before, the Voyager spacecraft are entering their very final phase.

Both of the Voyagers were launched from Cape Canaveral in 1977 – with Voyager 2 actually the first to take off – taking advantage of a rare alignment (once every 176 years) of Jupiter, Saturn, Uranus and Neptune to shoot into interstellar space.

They were designed to last five years and study Jupiter and Saturn but remarkably both spacecraft are still functioning despite escaping beyond the hot plasma bubble known as the heliopause that defines the beginning of the edge of our solar system.

Speaking to the magazine Scientific American about powering down the probes, NASA physicist Ralph McNutt said: “We’re at 44 and a half years, so we’ve done 10 times the warranty on the darn things.”

Both of the spacecraft are powered by radioisotope thermoelectric generators (RTGs) – powered by the heat from decaying spheres of plutonium – although the output of these RTGs is decreasing by about four watts every year.

This means instruments are being turned off one by one.

As of today Voyager 1 only has four functioning instruments left, and Voyager 2 has five.

It is certain that at some point the plutonium powering the spacecraft will decay beyond what is capable of keeping the probes functional. Some estimate that could be as soon as 2025, while others hope it may be later.

But they have surprised NASA’s engineers so far, who had expected to start turning Voyager 2’s instruments off first, one by one, starting in 2020. Instead, nothing has been switched off since 2008.

“If everything goes really well, maybe we can get the missions extended into the 2030s. It just depends on the power. That’s the limiting point,” said Linda Spilker, who started working on the Voyager missions before they launched, speaking to Scientific American.

It took Voyager 1 around 36 years to breach the heliopause, and the data it has sent back since then suggests some fascinating qualities about the role of magnetic fields in the universe.

Voyager 2 then passed into interstellar space in 2018 – 41 years after it was launched – breaking through the outer boundary of the heliopause where the hot solar wind meets the cold space known as the interstellar medium.

But space is very, very big and neither of the probes are currently considered to be outside of the solar system. The final boundary is considered to be the Oort Cloud, a collection of small objects still under the influence of the Sun’s gravity.

NASA says it will take about 300 years for Voyager 2 to reach the inner edge of the Oort Cloud, and possibly 30,000 years to fly beyond it.

Voyager 1 is currently 14.5 billion miles (23.3bn km) from Earth and it takes 20 light hours and 33 minutes to travel that distance, meaning it takes two days to send a message to the spacecraft and get a response.

Voyager 2 isn’t quite so far, only 12 billion miles from the Earth, just under an 18 hours’ light distance from us.

Both of the spacecraft carry a gold-plated disc containing multicultural greetings, songs and photographs, in case they one day meet intelligent life – although some astronomers have cautioned that humanity may regret making first contact.

Carl Sagan was a dismissive of this concern: “The fact is, for better or for worse, we have already announced our presence and location to the universe, and continue to do so every day.

“There is a sphere of radio transmission about thirty light years thick expanding outward at the speed of light, announcing to every star it envelops that the earth is full of people.

“Our television programs flood space with signals detectable at enormous distances by instruments not much greater than our own. It is a sobering thought that the first news of us may be the outcome of the Super Bowl,” he wrote.

As recently as last month NASA said its engineers were working on a solving a mystery affecting Voyager 1’s telemetry data, although Voyager 2 is continuing to operate normally – albeit with some instruments now turned off for longevity.

The problem probe has an attitude articulation and control system (AACS) that is in charge of the spacecraft’s orientation, including keeping its antenna pointed precisely at Earth so it can send data home.

This data is still arriving, suggesting the AACS continues working as intended, but the telemetry data itself is invalid according to NASA. It appears randomly generated or to be not reflecting any possible state the AACS could actually be in, the space agency explained.

“A mystery like this is sort of par for the course at this stage of the Voyager mission,” said Suzanne Dodd, project manager for Voyager 1 and 2 at NASA’s Jet Propulsion Laboratory in Southern California.

“The spacecraft are both almost 45 years old, which is far beyond what the mission planners anticipated. We’re also in interstellar space – a high-radiation environment that no spacecraft have flown in before.

“So there are some big challenges for the engineering team. But I think if there’s a way to solve this issue with the AACS, our team will find it,” Ms Dodd added.

On 14 February 1990, as Voyager 1 passed Uranus, it turned back towards the Earth to take a picture of our planet as a tiny dot.

Four years later the astronomer Carl Sagan reflected on the significance of the photograph to an audience at Cornell University, famously coining its name as the “Pale Blue Dot”, and giving one of the most widely published speeches of all time.

“The aggregate of our joy and suffering, thousands of confident religions, ideologies, and economic doctrines, every hunter and forager, every hero and coward, every creator and destroyer of civilisation, every king and peasant, every young couple in love, every mother and father, hopeful child, inventor and explorer, every teacher of morals, every corrupt politician, every ‘superstar’, every ‘supreme leader’, every saint and sinner in the history of our species lived there – on a mote of dust suspended in a sunbeam.”

We probably won’t see its like again any time soon.

NASA said that while it is possible for the cameras to be turned back on, doing so isn’t a priority for the interstellar mission.

The agency added that the picture likely wouldn’t be anywhere near as good as the one captured in 1990 either: “It is very dark where the Voyagers are now. While you could still see some brighter stars and some of the planets with the cameras, you can actually see these stars and planets better with amateur telescopes on Earth.”

For those who still have hope, NASA cautions that the attempt could be a waste of the probes’ dwindling resources: “The computers on the ground that understand the software and analyse the images do not exist anymore.

“The cameras and their heaters have also been exposed for years to the very cold conditions at the deep reaches of our solar system.

“Even if mission managers recreated the computers on the ground, reloaded the software onto the spacecraft and were able to turn the cameras back on, it is not clear that they would work.”