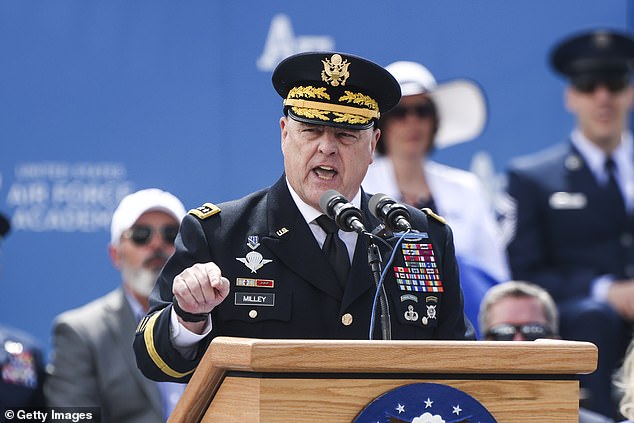 The United States’ top general has called on the White House to evacuate all 18,000 interpreters who helped US troops in Afghanistan over fears the Taliban will murder them.

General Mark Milley, chairman of the Joint Chiefs of Staff, says a plan has been drawn up to rapidly fly all 18,000 interpreters to safety – but the White House has pushed back against his call to use it.

Speaking at a US Air force Academy commencement ceremony on Wednesday, Milley said: ‘There are plans being developed very, very rapidly here for not just interpreters, but a lot of other people that have worked with the United States.

‘We have a moral commitment to those that helped us.’

Supporters of Milley’s plea have called on the US to launch a similar effort to last year’s COVID-19 repatriation flights, which saw 100,000 Americans quickly brought home to safety as the pandemic erupted.

US troops are set to leave Afghanistan by July – well ahead of President Biden’s desired September 11 withdrawal date.

But military personnel warn that the hardline Taliban are already beginning to seize control of Afghanistan again  – with its Islamist murder squads specifically targeting interpreters who have helped the US military.

At least five have been murdered this month, with more than 300 killed since 2014.

However, the White House immediately pushed back against Milley’s call, with a National Security Council spokesman saying there were no ‘plans for evacuations at this time’

The spokesman added: ‘The State Department is processing [special immigrant visa] applications in Kabul. They are focused on ensuring that the system functions quickly and consistent with U.S. security and other application requirements.’

Chairman of the Joint Chiefs of Staff Mark Milley, pictured, called for all 18,000 interpreters who helped troops in Afghanistan to be evacuated to safety after the US withdraws

Milley has since backtracked on his earlier comments, saying evacuations were one of many plans being considered.

His spokesman Army Col. David Butler said: ‘The physical evacuation of Afghans is one option of many being considered and it is not necessarily the primary option to safeguard Afghans at risk. An evacuation is not imminent.’

Democrat and Republican lawmakers have also written to Biden and Secretary of State Anthony Blinken to impress upon them the urgency of the threat the interpreters are facing.

Army veterans who fought shoulder-to-shoulder with the interpreters are also fundraising and lobbying the White House to save their comrades.

At least five coalition translators have been murdered this year and former UK interpreters subjected to terrifying attacks as the Taliban regains territory held by the US since 2001.

Retired U.S. Army 1st Sgt. Gerald Keen, of Grand Haven, Michigan, is among the most vocal campaigners for evacuation, and has started fundraising in an attempt to bring his interpreter to the United States.

‘My fear is they will hunt him down,’ said Keen, after the Taliban threatened to kill a young Afghan interpreter who worked with him.

‘Not only him, his family,’ Keen added. ‘He’ll be the last one killed if they find him. They’ll kill his brothers, sisters, kids, wife and then, they’ll kill him. And they’ll behead him. They have no remorse.’ 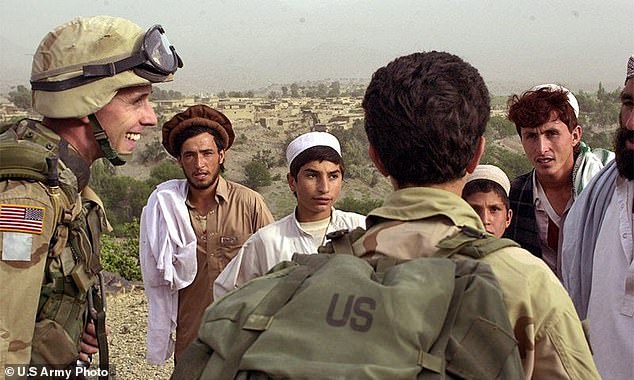 As the US military prepares its final exit from Afghanistan, fears grow for the estimated 18,000 Afghan interpreters and families will be left stranded 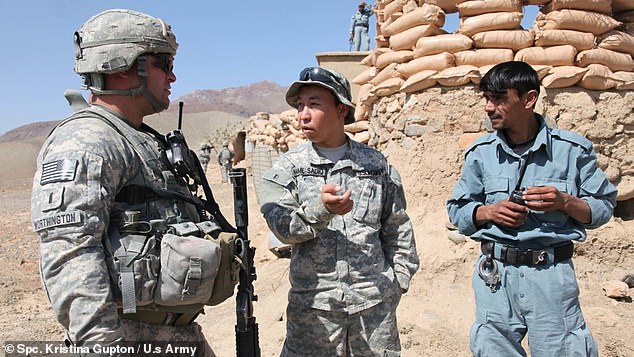 The interpreters face grave danger – torture and execution – from the Taliban, with five being murdered in the last month and 300 since 2014 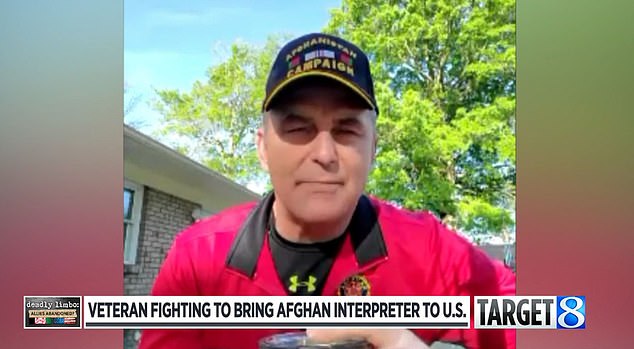 Retired U.S. Army 1st Sgt. Gerald Keen says his interpreter Rahim and his wife and four kids will be murdered if they aren’t brought out of Afghanistan

Keen maintained a close friendship with his interpreter, who is referred to only by his first name of Rahim for his safety, soon after arriving in 2016.

Before he left, Keen promised to do everything in his power to bring Rahim and his wife and four children to the United States.

Keen said he suffered from PTSD from being under constant threat of attack during his deployments during Desert Storm, Iraq and Afghanistan.

He said after one mortar attack on his base, he would seek out Rahim to make sure he was OK.

‘He’s just as much a soldier as I am because he helped the Americans and the coalition through the worst times of the war,’ Keen told Woodtv.com.

After returning to the United States in September 2016, Keen wrote to the US Citizenship and Immigration Services to support Rahim’s immigration.

‘He has shown tremendous strength and courage, while accepting a high degree of personal risk to himself, and family members,’ Keen, who is from Grand Haven, Michigan, said.

‘He and his family have been threatened and intimidated by Taliban, due to his faithful work with us. Additionally, rocket attacks occur near his village on a daily basis, which I, too, have experienced firsthand. As a result, he is afraid of what could happen if his family remains in Afghanistan.’

Interpreters who have worked for two years are eligible for the State Department’s  special immigrant visa program.

However, the program has been plagued by delays, resulting in many interpreters being stuck in limbo and fearing for their lives.

Many interpreters who have risked their lives working with US troops for less than two years also complain that the program leaves them out unfairly.

They say the length of service makes no difference to Taliban killers, who slaughter anyone locals who worked with the US military for any length of time.

Rahim was approved for the special visa program in 2018, and submitted his official application two years ago.

But the application has been held up in a bureaucratic quagmire.

The interpreter told Woodtv.com that he had been placed on a Taliban hit list in January.

He was told to take extra precautions for his and his family’s safety.

A relative had recently been shot in the face and killed by a Taliban sniper.

‘Every morning, every evening, the (Taliban) are coming here, and they are attacking the checkpoints,’ he told the Michigan-based station.

‘They are not accepting the human rights. There is no humanity, and there is no love. Only the people are killing the people, which is very terrible.’

The Keen family had raised $8000 on GoFundMe to cover medical exam expenses required. 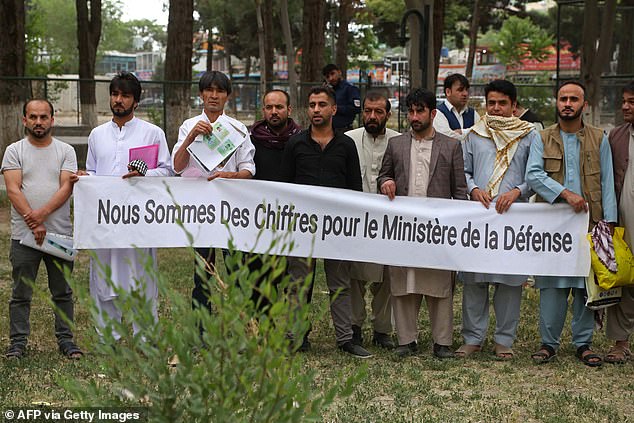 Afghan former interpreters for French forces gather during a demonstration at Shahr-e Naw Park in Kabul.

No One Left Behind, a non-profit organization formed by veterans, has documented the deaths of more than 300 interpreters and their families since 2014.

Its chairman James Miervaldis, who served two tours in Iraq and Afghanistan, told Fox News time was fast running out for the Pentagon to have the capability to help the stranded interpreters.

‘The Taliban’s going to attack the prisons, free all of their prisoners and then wreak havoc. You don’t even need a crystal ball.’

‘They’re being hunted down right now as we speak. They are reaching out to me, these interpreters, in a panic,’ he told Fox News.

Attacks by the Taliban have intensified in recent months with at 231 civilians and 359 pro-Government forces being killed in the first two weeks of May. 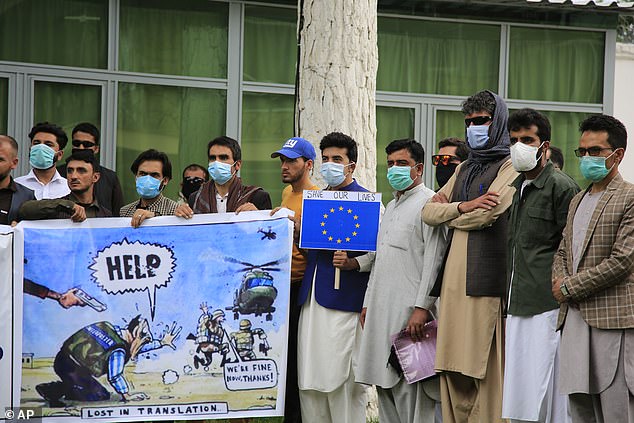 During a protest in Kabul on April 30, Afghan interpreters plead to be repatriated before the Taliban take over the country

Twenty US Senators let by Jeanne Shaheen of New Hampshire and Joni Ernst of Iowa wrote to Biden last week demanding the thousands of interpreters are provided with visas to come to the US.

‘We are deeply concerned about the fate of these individuals after the departure of U.S. troops,’ they wrote.

‘There are already reports of Taliban threats targeting those who helped the U.S. once troops are withdrawn. These threats cannot be ignored.’

Congressman Michael McCaul and Gregory Meeks, the ranking member and chair of the House Foreign Affairs Committee have also expressed the dire need of the situation to Secretary of State Anthony Blinken.

‘The United States has a moral obligation and a national security interest in fulfilling its promises to those who have risked their lives to support our mission,’ they told Blinken.

The United States troops and their NATO allies intend to be out of Afghanistan by early to mid-July, well ahead of President Biden’s September 11 withdrawal deadline, military officials said, in what has turned into an accelerated ending to America’s longest war.

Earlier in May, Mohammad Shoaib Walizada, an Afghan interpreter who worked with U.S. forces in combat operations between 2009 and 2013, told the AFP press agency the US must live up to its promises.

‘The main thing we want is that we should be taken to the United States. That’s what we were promised,’ said Walizada, 31, who was shot in the leg when he was with U.S. forces in Ghazni in 2011.

Another interpreter, who gave his name as Jaffry, pleaded for help.

‘Please do not leave us behind, your forgotten heroes. The success of your fighting is because of the presence of these interpreters on the battleground.’

The UK’s Ministry of Defence wrote to at least 50 interpreters telling them to be ready to relocate in weeks. ‘Please make all necessary personal, professional, domestic and financial arrangements you need to in Afghanistan to facilitate this.