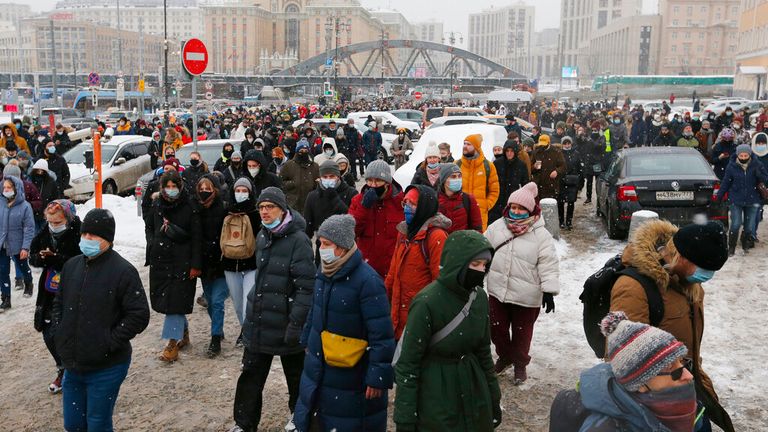 Hundreds of people have been arrested in Russia as rallies have broken out across the country in demand of jailed opposition leader Alexei Navalny’s release.

Thousands of people have taken to the streets in nationwide protests that have rattled the Kremlin.

Police so far have detained more than 750 protesters across Russia’s 11 time zones, according to the OVD-Info, a group that monitors arrests.

An anti-corruption investigator, Navalny was arrested on 17 January upon his return from Germany where he spent five months recovering from nerve agent poisoning that he has accused the Kremlin of being responsible for.

Sky News’ Moscow correspondent Diana Magnay, at the scene of one of the protests, says there is a “vast police presence” acting as a “ring of steel around central Moscow”.

She said one demonstrator was detained on the street as she was speaking to him.

Before his arrest, the demonstrator told her he was “not afraid of going out” and “Navalny is the only guy who cares about Russia”.

He added he was “sad” that more people did not support Navalny, which he said was “out of fear”.

She said central Moscow is currently blocked due to pedestrian traffic and seven metro stations are closed.

The chants referred to an opulent Black Sea estate reportedly built for Mr Putin, in which Navalny’s team have released a popular video about.

Navalny’s team initially planned for Sunday’s protest to be held in Moscow’s Lubyanka Square, home to the main headquarters of the Federal Security Service.

Magnay says thousands turned out for the protests and people didn’t know where to gather after police cordoned off the area around the square – prompting the organisers of the protest to move location three times.

She says the situation is “very dramatic” – with huge numbers of police telling demonstrators: “This is an illegal gathering and you must leave”.

Navalny and his associates and activists across the country have been jailed as part of a multipronged effort to stop the protests.

On Friday, his brother Oleg, top aide Lyubov Sobol and three other people were put under two-month house arrest on charges of alleged violations of coronavirus restrictions during last weekend’s protests.

Nearly 4,000 people were reportedly detained at demonstrations last week which took place in more than 100 Russian cities, with some given fines and jail terms.

Around 20 were accused of assaulting police and faced criminal charges.

What trashy novels taught me about life | Books

Outrage in India over latest ‘honour killing’ as…

Senate to debate as Republicans attempt to derail $1.9…

China’s Plan to Win in a Post-Pandemic World: What You Need…