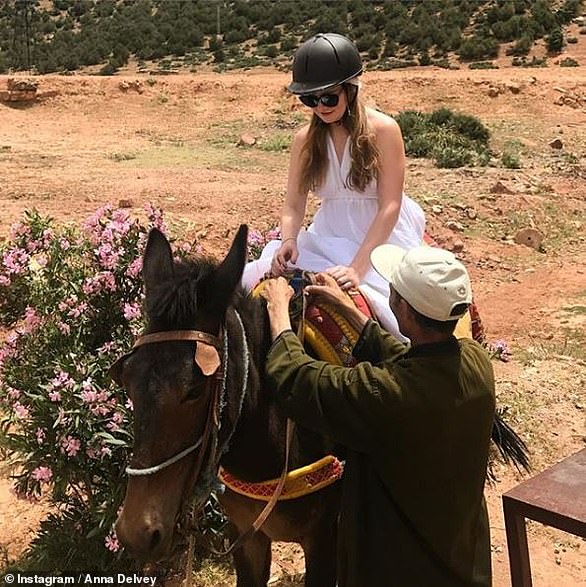 Sorokin, who adopted the name Anna Delvey, deceived friends and financial institutions alike into believing she had a 60 million euro wealth overseas that would cover her lavish hotel stays and jet-setting lifestyle.

Many believed she was the German heiress she claimed to be given she traveled in celebrity circles and tossed around crisp $100 bills.

But behind the jet-setting lifestyle and expensive designer clothing, prosecutors said Sorokin was simply a fraudster just trying to get a taste of the high life.

Sorokin was born in Russia in 1991 and moved to Germany in 2007 when she was 16 with her younger brother and parents.

Her father had worked as a truck driver and later as an executive at a transport company until it became insolvent in 2013. He then opened a heating-and-cooling business specializing in energy-efficient devices.

After moving to London to attend Central Saint Martins fashion school, Sorokin returned to Berlin and interned in the fashion department of a public relations firm.

She then relocated to Paris where she secured a coveted internship at the French fashion magazine Purple. It’s believed to be around this time that she changed her name from Sorokin to Delvey.

Sorokin was already brushing shoulders with rich people in the years before she came to New York and started dazzling Manhattan’s social elite.

Acquaintances say Sorokin had spent several years playing the part of an art-obsessed German heiress across the world.

She could have kept the payment from Netflix a little longer, according to experts, because she had already filed a direct appeal in her criminal case

She rubbed shoulders with the fashion elite at Paris Fashion Week as early as 2013 and was frequently spotted at London nightspots like the Chiltern Firehouse and Loulou’s.

By the time Sorokin arrived in New York in early 2016, she seemingly had the social connections to make a name for herself, as well as a designer-clad wardrobe that exuded wealth.

At the time, she had 40,000 followers on Instagram and was regularly pictured at events and parties with well-to-do people.

She quickly went about proving herself to be an impossibly rich heiress who had plans to shake up New York’s art world.

She made a show of proving she belonged and would regularly be decked out in her now signature Celine glasses, Gucci sandals and high-end buys from Net-a-Porter and Elyse Walker.

Sorokin rented a $400-a-night room for several months at Manhattan’s expensive 11 Howard hotel and was often seen to pass out $100 tips to concierges and Uber drivers.

She would also splash out on shopping sprees in luxury boutiques, expensive personal training sessions and beautician appointments.

The socialite elite were drawn to her and she would regularly host large dinners for celebrities, artists, CEOs and the like at the lavish Le Coucou restaurant in SoHo.

Sorokin kept up the heiress ruse when she went looking for a $22 million loan to fund her new club in November 2016.

Her fall from grace seemingly began when she was kicked out of the 11 Howard hotel in New York in early 2017, after racking up $30,000 of charges and failing to provide a working credit card.

Around the same time she also chartered a private plane for a trip to Nebraska to try and meet billionaire Warren Buffet.

However, the $35,400 bill was never paid so the charter company cancelled the return leg of her journey.

Upon her return to New York, she was evicted from the 11 Howard hotel and moved to the Mercer hotel around the corner.

She subsequently embarked on a $62,000 extravagant trip to Morocco. Her friend, a former Vanity Fair photo editor Rachel Deloache Williams paid for the flights on her work credit card with the assumption she would be reimbursed as promised by Sorokin. 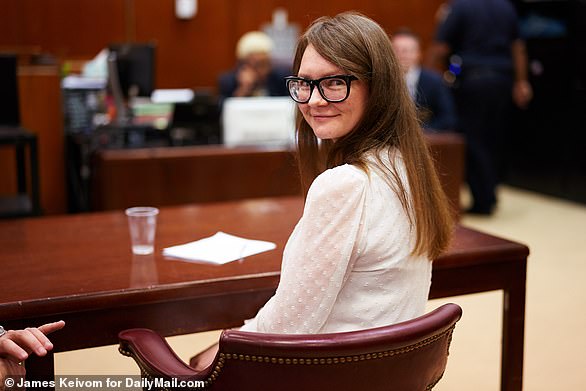 In April 2019, Sorokin was convicted of multiple counts of attempted grand larceny, theft of services, and larceny in the second degree for defrauding New York hotels and wealthy acquaintances

They checked into a $7,000-a-night villa at the five star resort La Mamounia, which Williams also paid for, after Sorokin promised to pay her back when they returned to New York.

The six-day trip was without hiccups for several days until the hotel staff insisted on putting a credit card on file because Sorokin had booked their trip without a working one.

Williams, who said she had $410 in her checking account at the time said the $70,000 balance was more than she earned in a year.

After months of hassling her for the money, Williams reported Sorokin to police and then the New York district attorney’s office.