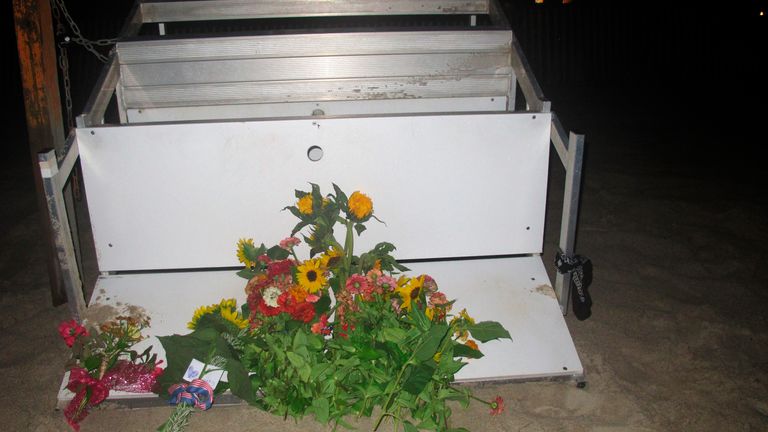 A lifeguard killed by a lightning strike in New Jersey has been identified as teenager Keith Pinto.

The 19-year-old, from Toms River, was named by police as one of four lifeguards who was struck in Jersey Shore on Monday afternoon.

Mr Pinto was among eight people in total who were hit by lightning in the Berkeley Township area, with the other seven taken to hospital with non-life-threatening injuries.

Flowers were left at the scene, alongside a note saying: “We were at the beach today and are grateful for what you’ve done for us by keeping us safe at the beach. We are so sorry for your loss.”

Berkeley Township mayor Carmen Amato said: “This young person was out there every day protecting the lives of others. Our lifeguard teams, like so many along the shore, develop special connections with the community throughout the summer, which makes this loss even greater.”

It marked the second death of a lifeguard at New Jersey‘s Jersey Shore in the last week.

On 20 August, Norman Inferrera III, 16, died the day after an accident in Cape May, on New Jersey’s southern tip.

He was rowing a lifeboat when it was struck by a wave and flipped over, knocking him unconscious, authorities said.

Tom Gill, a spokesperson for the US Lifesaving Association, said line-of-duty deaths are extremely unusual for lifeguards and that the two in Jersey Shore were only the second and third he can recall in the last 30 to 40 years.

“This just doesn’t happen,” he said. “For two fatalities in such a short time frame in the same general area, this is a tragedy beyond measure.”

Berkeley’s beaches are close to swimming until Thursday, and crisis counselling has been made available to lifeguards and beach staff.

People will be allowed to sit on the beach and sunbathe, and police are investigating the incident.

R Kelly accused of sexually abusing teenage boy after asking him what he was willing to do for music, court told | Ents & Arts News

US troops reflect on helping thousands of Afghans ‘to a better life, to freedom’ | World News