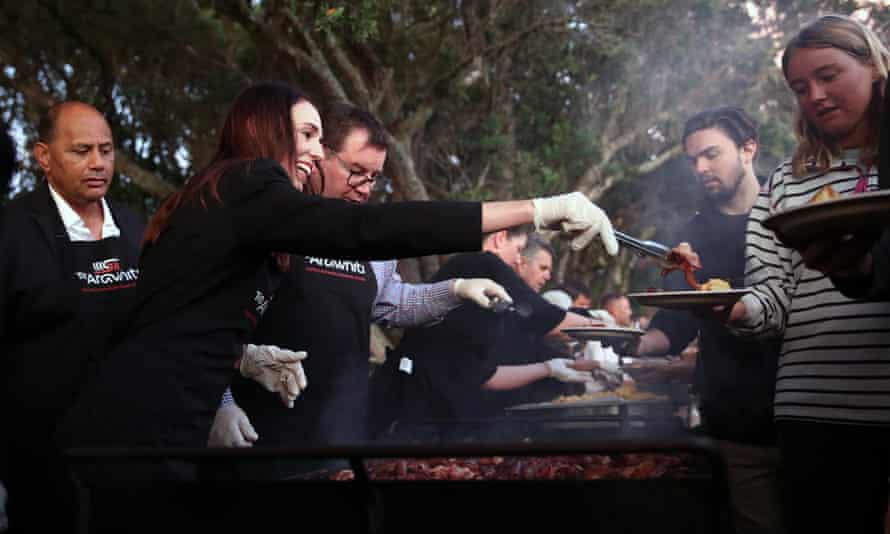 Leaders from all walks of New Zealand life have commemorated the country’s national day with a dawn service at Waitangi in the culmination of almost a week of celebrations, speeches and ceremonies.

The prime minister, Jacinda Ardern, was joined by other political figures, religious leaders, military and police chiefs and countless others for the sombre, soulful occasion, which marks the country’s founding.

At the end of it all Ardern donned an apron and staffed the barbecue, dishing up bacon and eggs as sunlight bathed the Waitangi Treaty Grounds.

The dawn service was one of hundreds of events held across Aotearoa for Waitangi Day as fears that Covid-19 might hurt attendance failed to materialise.

Thousands of Kiwis braved the 5am start, journeying to the grounds where the Treaty of Waitangi was signed by Māori chiefs and the British Crown 181 years earlier. Beginning in darkness, those gathered heard prayer and joined together in song, singing waiata and the national anthem.

“Today we mark the Treaty of Waitangi, Te Tiriti o Waitangi,” she said. “We acknowledge our partnership, constantly learning, striving for better, holding hope for the future.”

Then came the fry-up. Since becoming prime minister in 2017, Ardern has made a tradition of government members cooking a free breakfast for all attendees to the service.

“When I first became prime minister I was running through the usual programme that every other leader has had here and I was told that there’s usually a prime minister’s breakfast and it’s hosted at the Copthorne [Hotel],” Ardern said.

“My view was that that wasn’t as open and didn’t include as many people as I would like. I’m a big fan of a bacon butty. And so that’s how the barbecue was born.”

New Zealand has commemorated Waitangi Day as a public holiday since 1974, for two years as “New Zealand Day”, before reverting to the name of the foundational treaty.

In years past it has often been the scene of demonstrations, as Māori protest about the lack of progress made in tackling inequality – Māori people are routinely over-represented in prison populations and suffer worse health and mortality outcomes, as well as facing entrenched issues of poverty, homelessness and drug and alcohol abuse.

Under Ardern the celebration has taken on a more conciliatory tone, with the prime minister usually spending several days at the treaty grounds listening to Māori leaders and in 2018 memorably asking those gathered to hold her government to account.

This year Ardern fulfilled her election promise of making the Māori new year, Matariki, a public holiday from next year. “Matariki is a uniquely Māori and therefore New Zealand-based celebration … and in our view it’s been a long time coming,” she said on Thursday.

But she also acknowledged that her government had more to do. “There will never be a time – I think, if we are honest with ourselves – that we will stand here at Waitangi and say that we have reached a point of perfection, because there will always be challenges,” she said. Indeed, her generally optimistic outlook was met by a healthy dose of cynicism from Māori leaders. “Don’t just come sit down once a year and go back to Wellington,” Hirini Tau, a local Māori elder, told Ardern.

Covid UK: Almost ALL adults could be vaccinated by May