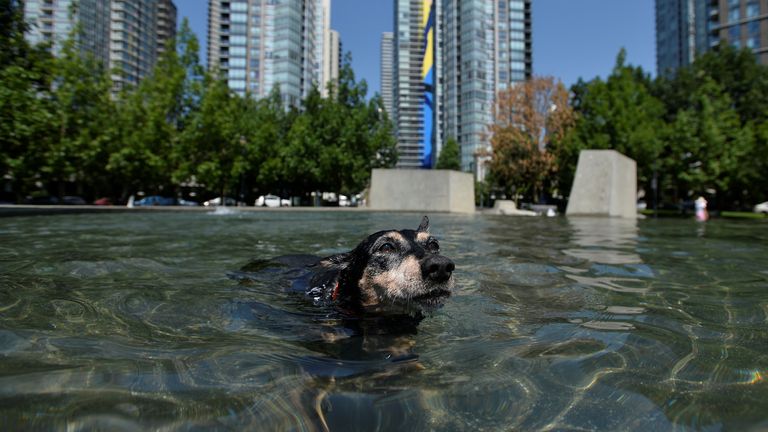 Governments around the world need to urgently plan for more extreme weather events to prevent people from dying of heat, a climate change expert has urged.

Hundreds of people in the northwest US and Canadian province of British Columbia are believed to have died in the past week from heat as they deal with a “heat dome” that has pushed temperatures to 49.6C.

Rupert Stuart-Smith, a PhD student at Oxford University’s Environmental Change Institute, told Sky News there is “clear evidence” climate change has a role to play with an increase in heat-related mortality.

“Over a third of heat-related deaths are now caused by climate change, the hotter the heatwave the more deaths,” he said.

“We are able to see this by looking at a heatwave and asking what it would have looked like without human-generated greenhouse gas emissions.

He said governments have a big role to play in adapting to and being prepared for more extreme weather events.

“Some of the most deadly events are happening to places you historically did not need to prepare for serious heatwaves.

“The Pacific Northwest – historically events didn’t happen on this scale so availability of aircon, or plans to protect people weren’t needed.

“We need to do more to plan for these events as they’re increasing.”

And it is not just people dying from heat-related illnesses during heatwaves, he said, but also after the events.

“Already in Canada, we’re seeing the perfect conditions for wildfires which burn houses down and cause huge health problems as smoke gets into people’s lungs.

“There are also other impacts such as the sudden extreme heat melting the snow so rivers burst their banks and flood towns.

“This will happen in growing numbers unless we dramatically reduce greenhouse emissions – we need to prevent the impact of climate change getting worse in the future but also right now, it’s not just a future problem.”

Mr Stuart-Smith said all countries need to think harder about how to protect people from climate change and these “intolerably dangerous events”.

Mr Stuart-Smith added: “It’s a shame that it takes these extreme impacts in the US or Europe to get people to understand, but if that’s what it takes then hopefully the situation in the US and Canada will be a warning and a motivator for other governments to take urgent action.”