Oklahoma set to outlaw almost all abortions with threat of prison and $100,000 fines | US News 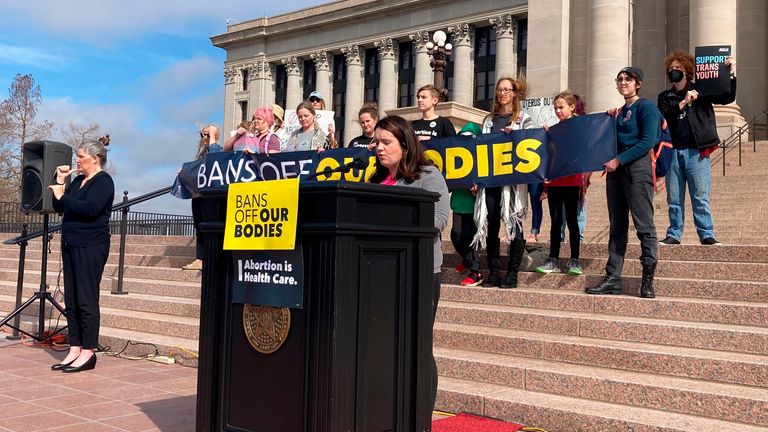 Oklahoma has passed a bill that would make it illegal to perform an abortion, except in medical emergencies.

The state’s Republican-controlled House of Representatives gave it final legislative approval, which stands to make almost all cases of abortion punishable by up to 10 years in prison and a $100,000 fine.

The bill now heads to the desk of Republican Governor Kevin Stitt for signing, having already been passed by the Midwestern state’s Senate last year.

Mr Stitt is expected to sign the bill for it to come into effect this summer, assuming it isn’t blocked by the courts.

‘Relentless attacks on our freedoms’

The bill’s passage came on the same day as more than 100 people attended a Bans Off Oklahoma rally outside the Oklahoma Capitol building in support of abortion rights.

“These restrictions are not about improving the safety of the work that we do,” she said. “They are about shaming and stigmatizing people who need and deserve abortion access.”

Oklahoma’s ban takes on even greater significance because the state has become a destination for women seeking abortions from Texas, where the practice has been outlawed for pregnancies of six weeks or fewer since September.

Ms Wales said Planned Parenthood’s abortion clinic in Oklahoma has seen an 800% increase in the number of women from Texas after the state passed the most restrictive anti-abortion law in the US in decades.

Abortion laws in other US states

In recent weeks, Idaho became the first US state to enact a law modelled on the Texas one, even though the governor who signed it shared concerns.

By the end of June, the US Supreme Court is due to rule in a case involving a Republican-backed Mississippi law that gives its conservative majority a chance to undermine or even repeal the landmark 1973 Roe v Wade ruling.

Roe v Wade recognised that the right to personal privacy under the US Constitution protects a woman’s ability to terminate her pregnancy.

Protesters Clash With Police in Peru