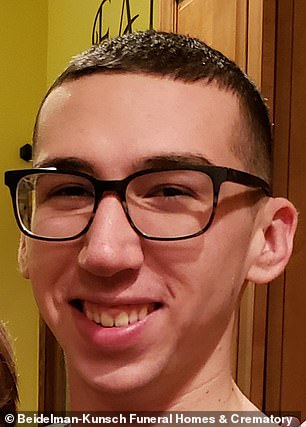 The parents of Alex Kearns (pictured), 20, who killed himself last year after seeing a negative balance of $730K in his Robinhood account are now suing the company

The parents of a 20-year-old college student, who committed suicide last year after seeing a negative cash balance of more than $730,000 in his account on the Robinhood stock trading app, are now suing the company for wrongful death.

Alex Kearns, 20, died on June 12, 2020, after apparently throwing himself in front of an oncoming freight train in his home town of Naperville, Illinois.

In an interview with CBS This Morning, Dan and Dorothy Kearns said their son, Alex Kearns, came home early last year due to the pandemic and they had a ‘joyful household’.

She said her son was interested in investing and before he graduated from high school, he opened an account with Robinhood.

According to his parents, Alex started investing his money earned from lifeguarding and funds given to him from his grandparents.

Alex’s parents believed he had ‘limited exposure’ and they didn’t realize that Robinhood had approved Alex to buy and sell options, which has the potential for huge losses.

‘I don’t understand how they allowed that to happen in the first place,’ Dan told the network.

Now, the Kearns are planning to file a lawsuit on Monday, accusing Robinhood of wrongful death, negligent infliction of emotional distress and unfair business practices. 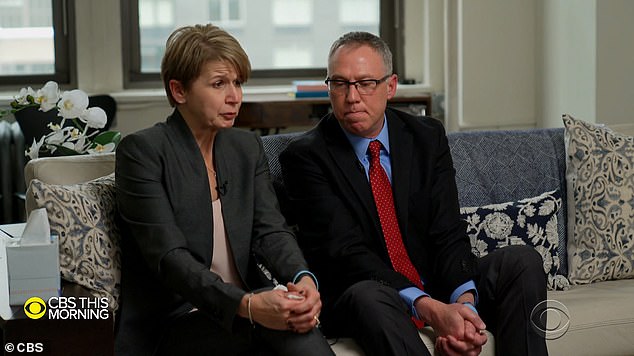 In an interview with CBS This Morning, Dan and Dorothy Kearns (pictured) said they are planning to file a lawsuit on Monday, accusing Robinhood of wrongful death, negligent infliction of emotional distress and unfair business practices

In the lawsuit, which was obtained by CBS, the Kearns say Robinhood provided no ‘meaningful customer support’ when their son reached out for help with the matter.

In response to the allegations, a Robinhood spokesperson said: ‘We disagree with the allegations in the complaint by the Massachusetts Securities Division and intend to defend the company vigorously.’

Alex, a University of Nebraska student, left a heartbreaking suicide note, part of which was published online by his cousin-in-law Bill Brewster.

‘How was a 20 year old with no income able to get assigned almost a million dollar’s worth of leverage?’ the note reads. ‘A painful lesson. F**k Robinhood.’

Although the details of Alex’s trades have not been made public, there is reason to believe that his negative cash balance was temporarily displayed as various trades settled, and he was not in fact $730,000 in debt as he believed.

From his note, Alex appeared to have been using what’s known as a ‘bull put spread,’ a strategy that limits risk for a trader by both buying and selling put options at different strike prices.

It’s likely that the negative balance appeared in Alex’s account only temporarily, as one half of the trade settled before the other did.

His investing value of $16,176.14 indicates that his account was still in the positive.

In addition to the lawsuit, the Kearns family also revealed that when Alex saw the negative balance of $730,000, he reached out to Robinhood telling them it had to be a mistake. 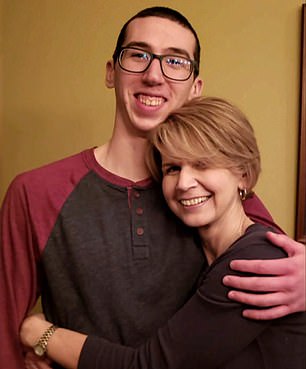 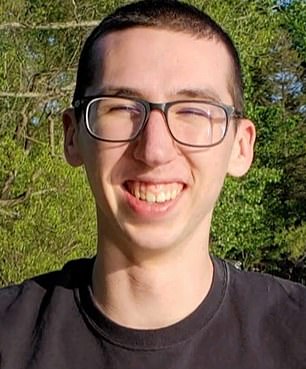 Alex’s parents believe Robinhood pushed young and inexperienced customers to engage in risky trading. In the lawsuit, the Kearns say Robinhood provided no ‘meaningful customer support’ when their son (left with his mom, and right) reached out for help with the matter 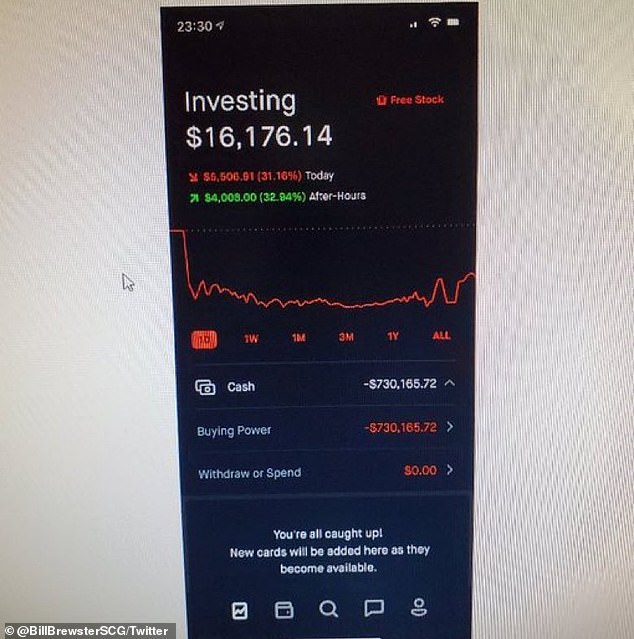 Alex left this screenshot of his Robinhood account, showing a negative cash balance of $730,165.62

This note, shared online by Alex’s cousin, was found after the college student died

Alex’s Robinhood account was restricted on June 11 and later that night, the company send him an automated email demanding Alex take ‘immediate action,’ and pay them $170,000.

Robinhood had no customer service phone number, but Alex emailed its support address three times on June 11 and the next day.

According to this parents, Alex had asked for help with understanding what had happened, and whether he could still offset the losses with another trade.

‘I was incorrectly assigned more money than I should have, my bought puts should have covered the puts I sold. Could someone please look into this?’ Alex wrote in one email. 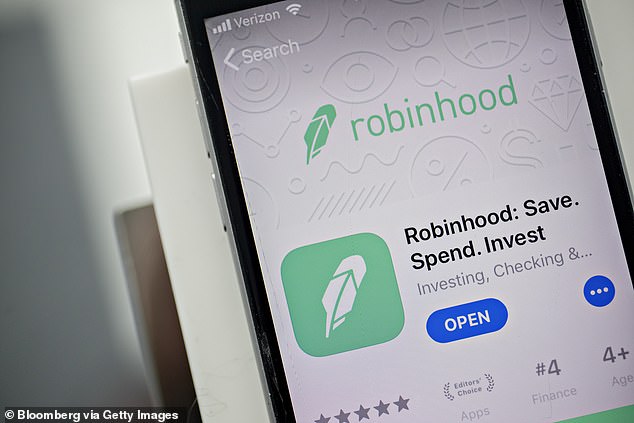 Robinhood and similar offerings make it easy to get involved in trading options, which can be wildly lucrative but also can have higher risks

Robinhood said last week that it has removed temporary trading restrictions on all stocks, including GameStop and AMC.

The online broker, one of the hottest venues in last week’s retail-trading frenzy, had put temporary buying restrictions on a number of securities as clearing house-mandated deposit requirements for equities increased ten-fold.

GameStop’s shares and others favored recently by retail investors fell further on Thursday, while US Treasury Secretary Janet Yellen vowed to protect investors.

Yellen called a meeting with top market watchdogs to discuss the recent trading volatility created by a social media-fueled buying craze for stocks that were shorted by hedge funds, including of video game store GameStop, which surged over 400 per cent in a week before falling sharply.

While it did not mention GameStop or retail trading platform Robinhood, Treasury said the Securities and Exchange Commission (SEC) will be ‘releasing a timely study of the events’.

In addition, the SEC and the Commodities Futures Trading Commission (CFTC) ‘are reviewing whether trading practices are consistent with investor protection and fair and efficient markets,’ Treasury said in a statement.

The events under review erupted when a group of small-time investors on online forum Reddit joined forces to try to thwart hedge funds that made massive bets that the shares would fall.

The wave of buying boosted the share prices of struggling companies, including GameStop and movie theater brand AMC Entertainment.

Shares of GameStop soared 1,800 per cent in January. But the share prices fell sharply when the frenzy subsided.

The events led to some retail investor apps such as Robinhood — which says its goal is to ‘democratize finance for all’ — to limit trading in some of the most volatile stocks last week, drawing the ire of critics.

Progressive US senators Bernie Sanders and Elizabeth Warren called for action against what they said were Wall Street abuses by hedge funds.

‘We need an SEC investigation,’ Warren told CNN Sunday. ‘It’s a rigged game, and it’s been a set of players who come in and manipulate the market.’

But Yellen said ‘we need to understand deeply what happened before we go to action’.

He received an automated message from Robinhood that reads: ‘Thanks for reaching out to our support team! We wanted to let you know that we’re working to get back to you as soon as possible, but that our response time to you may be delayed.’

‘I lost the love of my life. I miss him more than anything,’ Dorothy told CBS. ‘I can’t tell you how incredibly painful it is. It’s the kind of pain that I don’t think should be humanly possible for a parent to overcome.’

According to the network, the day after Alex died, Robinhood sent an automated email saying he didn’t owe any money.

‘Great news! We’re reaching out to confirm that you’ve met your margin call and we’ve lifted your trade restrictions. If you have any questions about your margin call, please feel free to reach out. We’re happy to help!’ the email reads.

But it was too late. Alex was gone and he left his family a note.

At the time, his cousin-in-law Bill Brewster shared the painful details of Kearns’ death on Twitter, hoping to educate the public and push Robinhood to make changes to its interface to avoid future tragedy.

‘When he saw that $730,000 number as a negative, he thought that he had blown up his entire future,’ Brewster told Forbes at the time. ‘I mean this is a kid that when he was younger was so conscious about savings.’

‘Tragically, I don’t even think he made that big of a mistake. This is an interface issue, they have slick interfaces. Confetti popping everywhere,’ Brewster told Forbes, referring to the shower of colorful confetti Robinhood displays when cash is deposited into an account.

‘They try to gamify trading and couch it as investment,’ he said.

Since launching in 2013, Robinhood has exploded in popularity, attracting 13 million users with a median age of 31.

The app, which is commission-free, has pushed traditional brokerages such as Charles Shwab and Merrill Lynch to offer free online trading in order to compete.

Robinhood and similar offerings make it easy to get involved in trading options, which are agreements to buy or sell blocks of stock at a certain price by a certain date.

Options trading can be wildly lucrative, but it is also highly complex and comes with greater risk.

Unlike trading stock, in which it is impossible to lose more money than you initially invest, in certain situations options trading can expose the trader to losing a theoretically infinite amount of money.

Defenders of Robinhood point out that it follows the same federal regulations regarding identifying and vetting potential customers that all brokerages are subject to.

But Brewster urged anyone who is considering options trading to educate themselves and understand the risks well.

‘The markets are bananas right now. It’s not the time for amateurs,’ warned Brewster, an analyst at Chicago-based Sullimar Capital Group, in a tweet.

‘Really really pay attention to position sizing. Stay away from exotic instruments like options and futures.’

If you or someone you know needs support, contact the National Suicide Prevention Lifeline at 1-800-273-8255.

Dogecoin is pushed to record high after Elon Musk’s tweets

A Monolith Appears in Turkey