Peek at Broadway Comeback: Times Event With “Me and the Sky” 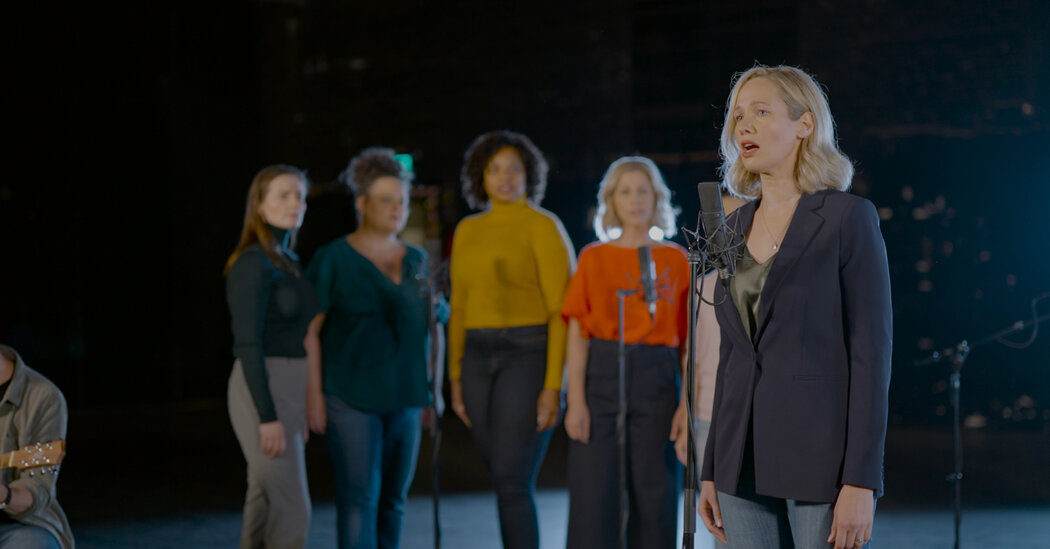 Times Insider explains who we are and what we do and delivers behind-the-scenes insights into how our journalism comes together.

In March, Zoe Gertz, an Australian actress, was asked by The New York Times if she would be interested in singing the soaring anthem “Me and the Sky” for an episode of its Offstage event series, which examines the theater industry during its pandemic hiatus. The number is from the Australian touring production of the 9/11 musical “Come From Away.”

After teams worked on in-house music and stage direction, Ms. Gertz belted the ebullient anthem to the rafters of a simple stage at Her Majesty’s Theater in Melbourne, sans audience but backed by six musicians and five castmates of the production’s female ensemble. And it all came together in just over two weeks.

“I am suddenly aliiiiiive,” Ms. Gertz sang with an irrepressible smile as she told of her character’s love for flying.

The sentiment seems to be spreading. Broadway’s reopening will now occur in August. In Australia, “Frozen,” “Hamilton” and “Harry Potter and the Cursed Child” were running at or near full capacity in Sydney and Melbourne for months (though masks were still required) until a recent lockdown in Melbourne put shows in that city on hold again. The performance for the Times event served as both a reminder of theater’s vitality during the pandemic and a preview of the energy to come.

The musical number began to take shape in early March after The Times’s theater reporter, Michael Paulson, suggested recording a special video of the inspirational song for the Offstage series, which streamed live on April 29 and is still viewable by Times subscribers.

“We wanted a song that was both good and would make sense out of context for people who hadn’t seen the show,” Mr. Paulson said. “It’s also a song that works without a very elaborate band or orchestra and is essentially a solo number.”

The four-and-a-half-minute track chronicles the tale of the real-life American Airlines pilot Beverley Bass, who was among the pilots with planes full of passengers who were diverted to Newfoundland on Sept. 11, 2001.

“One of the many emotions captured in this song is Beverley having to come to terms with the job she loves being put on hold, and not knowing when she might fly again,” said Rachel Karpf, the director of programming at The Times who helped plan the event with Beth Weinstein and Rachel Czipo. “We saw some parallels to the experience of theater workers in Australia and around the world this past year, as their industry was brought to a near-total standstill by the pandemic.”

Ms. Karpf said the Events team began discussing ideas for the episode in early January with Mr. Paulson; Scott Heller, then The Times’s theater editor; and Damien Cave, the Sydney bureau chief. Mr. Cave and Mr. Paulson were working on a story about the return of Broadway shows in Australia, which has been much more successful at containing the virus than the United States.

For a year, the “Offstage” series has followed theater through a shutdown. Now we’re looking at its rebound. Join Times theater reporter Michael Paulson, as he explores signs of hope in a changed city with Lin-Manuel Miranda, a performance from Shakespeare in the Park and more.

“Last year, I spent a lot of time writing about things falling apart,” Mr. Paulson said. “This year, I’m writing a lot about putting things back together — and Australia is the first place where that’s happening on a large scale.”

For the “Offstage” number, Mr. Paulson said he had hoped that an American audience would connect with the intimate setup of a bare stage and just a few instruments, which he likened to a cabaret performance.

Still, approximately 35 people, including a Melbourne production crew, were needed to stage the number. The cast and crew were tested weekly during rehearsals, and microphones and instruments were cleaned before and after each use. The performance was the theater’s first since March 2020.

Liam McIlwain, the resident director and choreographer of the Australian production of “Come From Away,” was instrumental in coordinating the chorus of bass, guitar, piano, violin, cajón and a silver whistle.

He also had decided that the theater’s ghost light — a single light that’s traditionally kept on when a theater is unoccupied — would stay on during the performance to honor all the venues around the world that were still dark.

“When I walked in and saw that ghost light, I teared up,” Ms. Gertz said.

In the middle of the night, thousands of miles away in New York, Ms. Karpf watched the recording in progress via Zoom.

“It was strange to see a bustling production set — actors, crew, camera people — in close proximity to each other without concern,” Ms. Karpf said. But it may not be strange for long.

The next episode of “Offstage” on July 8, which is focused on signs of hope in the New York theater community, will feature an interview with Lin-Manuel Miranda. For more information and to sign up for the subscriber-exclusive event, go to nytimes.com/offstage.