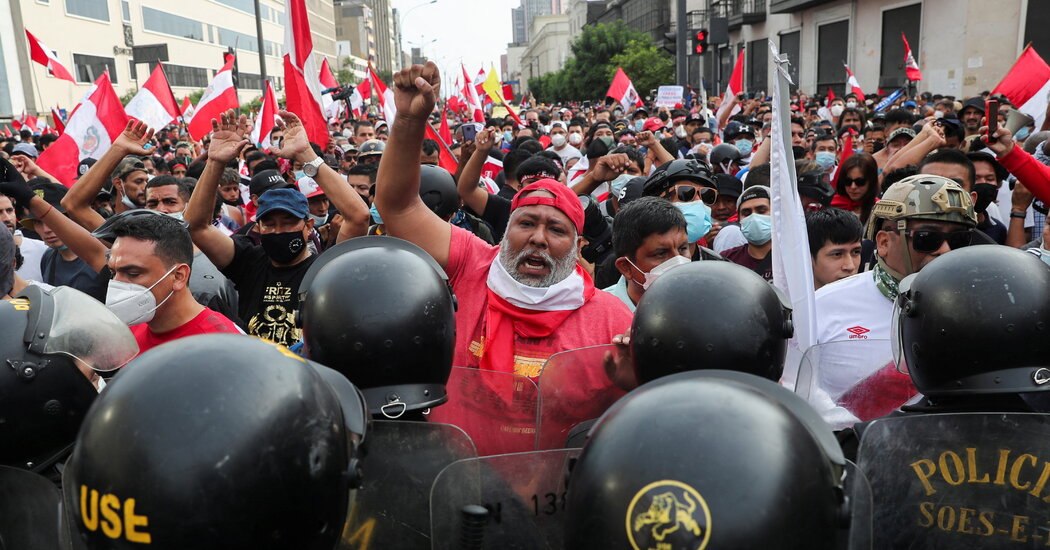 LIMA, Peru — President Pedro Castillo lifted an unprecedented emergency decree that had suspended civil liberties in the Peruvian capital, Lima, on Tuesday, as his increasingly isolated government struggled to quell a series of violent protests over rising fuel, fertilizer and food costs that swept the country in recent days.

The president had announced the curfew just before midnight on Monday, in a televised message that caught residents in the capital of almost 10 million people by surprise and triggered criticism from many sectors of Peruvian society. In issuing the restrictions, he had cited the recent unrest and required that residents of Lima and the neighboring port city of Callao stay inside their homes for roughly 24 hours.

He had to backtrack on Tuesday as protesters wearing the red and white jerseys of the national soccer team and waving Peruvian flags defied the order to demand his resignation in downtown Lima, while Mr. Castillo held talks with lawmakers. Demonstrators celebrated outside of Congress after widespread discontent led Mr. Castillo to reconsider.

“Peru isn’t going through a good moment,” Mr. Castillo said after announcing he would lift the curfew. He added that his government had to act to solve problems, saying: “We’re going to the presidential office to sign and annul this immovability measure.”

Clashes between protesters and police continued as dusk fell, with officers firing tear gas and people pelting them with rocks.

The order had gone into effect just two hours after Mr. Castillo’s televised announcement, shocking a country where many have lost trust in the government after back-to-back corruption scandals, political feuds and unrest in recent years — which have forced out three sitting presidents and landed former leaders and politicians in prison.

The measure had been immediately denounced by human rights lawyers, activists and critics as disproportionate and authoritarian, and analysts said it revealed growing paranoia in Mr. Castillo’s administration, as he has governed erratically and shed support from across the political spectrum in his first eight months in office.

Eduardo Dargent, a political scientist in Lima, called it “a defensive measure from a weak government, a clumsy government that’s growing weaker by the day.”

The office of the ombudsman, a state agency that advocates for human rights, and representatives of different political parties as well as human rights groups and business associations had all called for Mr. Castillo to repeal the measure. On Tuesday afternoon, at least hundreds of demonstrators defied the lockdown order, gathering downtown to protest and to call for Mr. Castillo’s resignation.

The demonstrations against rising fuel and fertilizer prices, caused initially by Russia’s invasion of Ukraine, entered their second week on Monday, and had expanded into full-fledged anti-government protests in several regions, with at least four deaths tied to the unrest.

While most of the violence in recent days had taken place outside the capital, a minister in Mr. Castillo’s cabinet said on Tuesday that the decision to impose a curfew across Lima had been based on information from a far-right lawmaker, Jorge Montoya, a former marine officer who just a week ago supported a second failed attempt to impeach the president.

Mr. Montoya told journalists on Tuesday that he was privy to intelligence that indicated that people planned to “come down from the hills” to loot Lima, echoing a conspiracy theory in the capital that plays on racist tropes about Peruvians from the Andes.

Residents of the capital banged on pots and pans to protest the measure at midday on Tuesday. The streets of the capital were mostly empty during the day, according to images aired on local news stations, as public transportation was shut down, schools were closed and the police had set up checkpoints to restrict transit.

Juan Lopez, 27, a doorman in Lima, didn’t find out about the curfew until Tuesday morning. “Everything was desolate,” he said.

“He promised so much but he hasn’t done anything,” Mr. Lopez said, referring to Mr. Castillo. The state of emergency seemed to be a “provocation,” he added. “People are going to rise up.”

Mr. Castillo, a farmer and former union activist who for more than two months led a teachers’ strike that shuttered schools in 2017, announced the decree on the eve of the 30th anniversary of Alberto Fujimori’s “self coup,” when the former strongman ordered the military to take control of Congress and the courts, marking the start of his authoritarian rule.

Like Mr. Fujimori, Mr. Castillo was elected democratically on a populist platform, propelled by an upswell of anti-establishment sentiment following years of economic and political crises. He narrowly beat Mr. Fujimori’s daughter, who had come to embody the political elite, in last year’s election.

In his first eight months in office, Mr. Castillo has burned through political capital and sunk his approval rating as he has zigzagged from left to right, stumbling from scandal to scandal and making a series of controversial appointments, while failing to propose any meaningful reforms.

He has so far survived two impeachment attempts and faces growing accusations of corruption that analysts say will almost certainly lead him to be formally investigated for criminal activity once his term and presidential immunity end.

“As this sort of incompetency and ineffectualness continues on, the authoritarian temptation grows, and that’s where I think this is coming from,” said Jo-Marie Burt, a professor of Latin American studies at George Mason University. Professor Burt lived in Lima during the country’s bloody internal conflict in the 1980s, when nighttime curfews were routine as the government cracked down on leftist insurgencies.

Even during the worst periods of violence, Peru did not enforce a 24-hour curfew, she said.

After ignoring the protests for several days, Mr. Castillo accused their leaders of being paid to stir up unrest, infuriating demonstrators. His prime minister told people to eat fish if they could no longer afford chicken, even though fish is more expensive, and his defense minister appeared to minimize the four deaths linked to the protests.