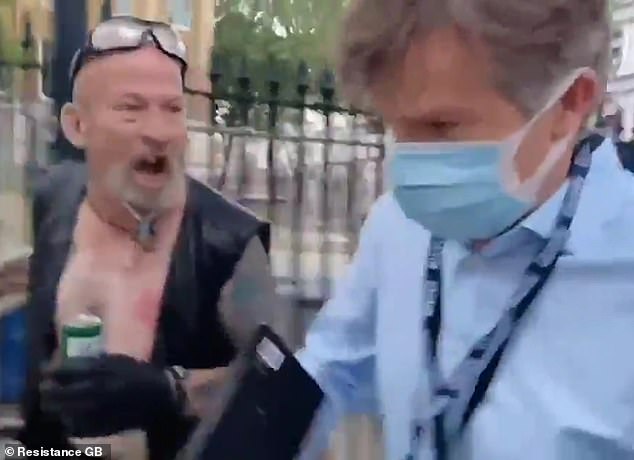 A video showed the Newsnight political editor trying to evade demonstrators as they chased and hurled abuse at him near Downing Street in London on Monday.

Scotland Yard launched an investigation and interviewed Martin Hockridge, 57, of Harpenden, Hertfordshire, under caution at a police station yesterday afternoon.

Last night, he was charged with an offence under section 4A of the Public Order Act, which was using threatening, abusive or insulting words or behaviour towards another person with the intention to cause them harassment, alarm or distress.

Hockridge, who is a gardener and describes himself on Instagram as a single parent and ‘freedom fighter’, will appear at Westminster Magistrates’ Court on June 29.

Metropolitan Police officers were today still trying to identify other people involved in the incident and appealed to the public to help with their investigation.

Mr Watt, who was wearing a BBC lanyard, ran through the mob and beyond a line of police officers as demonstrators shouted ‘traitor’, ‘liar’, ‘scum’ and ‘shame on you’. 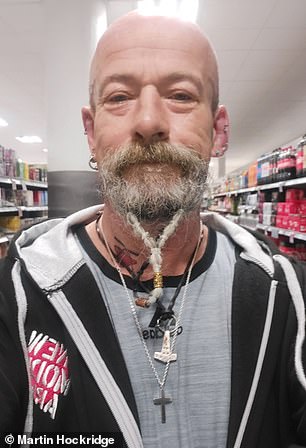 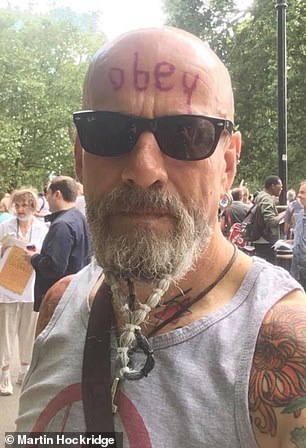 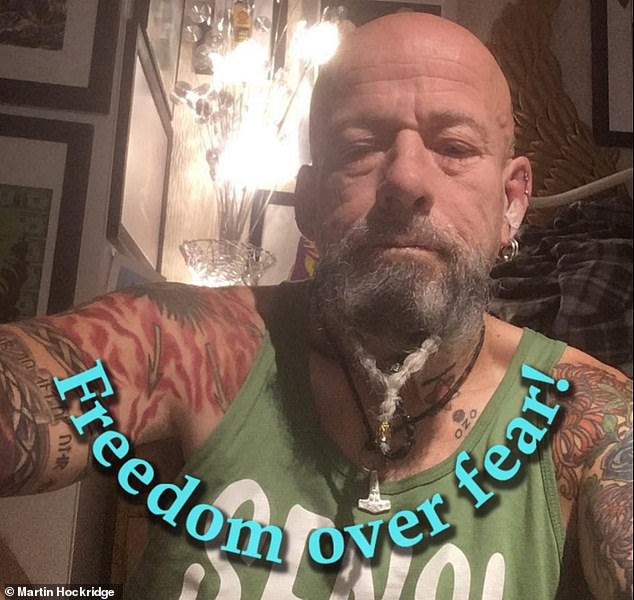 Hockridge, pictured on Facebook, will appear at Westminster Magistrates’ Court on June 29

After the footage was shared on social media yesterday, many questioned why dozens of uniformed officers seen in the video failed to help Mr Watt.

The force responded by claiming officers had not been in the ‘immediate vicinity’ of the incident but later conceded this was untrue and their actions would be reviewed.

The Metropolitan Police said: ‘We take those concerns seriously and will be reviewing our actions with a view to improving the policing of events for all Londoners.’

Mr Watt, who previously worked for the Guardian and the Times, told the Daily Mail that he would rather get on with his work than discuss the incident.

*This video is embedded from YouTube. MailOnline is not responsible for its title.* 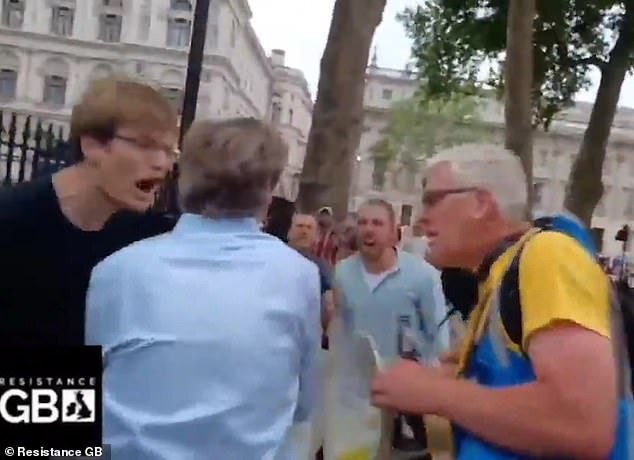 Mr Watt, who was wearing a BBC lanyard, ran through the mob and beyond a line of police officers as demonstrators shouted ‘traitor’, ‘scum’ and ‘shame on you’ 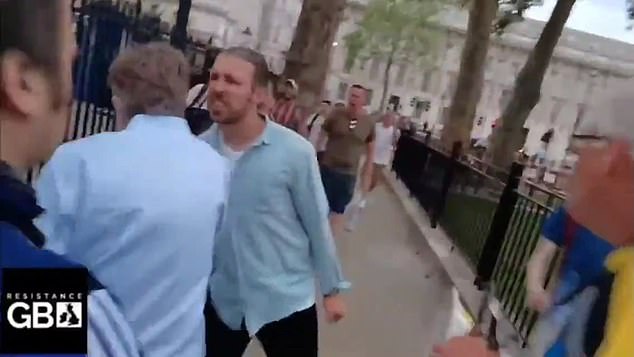 While it is not clear if Mr Watt was specifically targeted or whether protesters seized the opportunity after seeing his BBC lanyard, those abusing him made clear their distaste for the broadcaster’s coverage of lockdowns.

Nicholas Watt is an experienced head at BBC’s flagship political show Newsnight, having had more than 25 years experience on national newspapers.

Now the show’s political editor, a position he has held since 2016, he previously had a distinguished career at the Guardian and the Times.

During his time at the Guardian he served as chief political correspondent and European editor, based in Brussels.

And at The Times, Nick served as Ireland Correspondent based in Belfast during the final years of the Troubles and the beginning of the Northern Ireland peace process.

Boris Johnson led condemnation of the ‘disgraceful’ footage, emphasising the importance of a free press to the country’s democracy.

He tweeted: ‘Disgraceful to see the hounding of Nick Watt doing his job.

‘The media must be able to report the facts without fear or favour – they are the lifeblood of our democracy.’

Other MPs also condemned the behaviour of those protesting against the Government’s extension of coronavirus restrictions.

Home Secretary Priti Patel tweeted: ‘The video of BBC Newsnight’s Nick Watt being abused by a mob is appalling and distressing. This behaviour is never acceptable.’

She later added: ‘The safety of journalists is fundamental to our democracy. This month the Government launched a consultation to better understand the nature & volume of threats and abuse against journalists who are operating in the UK.’

Michelle Stanistreet, general secretary of the National Union of Journalists, criticised the Met Police. She said: ‘It is shocking that a man escaping a mob screaming at him, shouting traitor and calling him scum didn’t result in the police immediately intervening.’

Labour’s deputy leader Angela Rayner added: ‘I have been interviewed by Nicholas Watt on many occasions and he is always unfailingly polite and professional.

‘He doesn’t shy away from asking tough questions either. I am horrified by the video of him being abused for doing his job. A free press is integral to our democracy.’

Jo Stevens, Labour’s shadow culture secretary, said: ‘This extremely disturbing footage showing clear intimidation of a journalist while carrying out his job is absolutely unacceptable and should be condemned in the strongest terms. 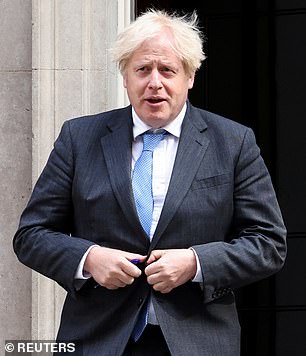 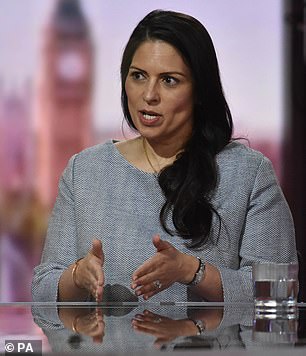 ‘It is shocking that a BBC lanyard makes someone a target like this.’

Following the incident, the BBC’s director-general Tim Davie said: ‘The safety of journalists is fundamental to any democracy – they must be able to report unhindered, free from abuse.

‘There is absolutely no justification for any journalist to be treated in this way.’

And a BBC spokesman said: ‘This behaviour is completely unacceptable. All journalists should be able to carry out their work without intimidation or impediment.’

Mr Watt’s colleague, BBC journalist Allie Hodgkins-Brown, said: ‘This is awful. In Central London 2021. Disagree with us fine. Switch us off fine but no journalist deserves this.’

Enquiries are ongoing to identify other people involved in the incident and police are appealing for the public’s help. You can call 101 or tweet @MetCC. Information can also be provided to Crimestoppers, anonymously, by calling 0800 555 111.

Sydney restaurateur allegedly tried to smuggle in 900kg of cocaine