In a summit meeting between President Biden and Vladimir Putin that was carefully choreographed in advance, only one of the leaders brought a general who is in command of a million-strong army: the Russian.

The question Kremlinologists are still assessing now that the Geneva summit is over is what does the general’s presence signify?

In terms spelled out in advance, Biden and Putin first met one-on-one, accompanied only by notetakers and translators during their encounter Wednesday. But in a second ‘expanded’ meeting, Putin was joined by Valery Gerasimov, Chief of the General Staff of the Armed Forces and First Deputy Minister of Defense.

Gerasimov is a high-powered member of the Russian military command – the equivalent of Chairman of the Joint Chiefs of Staff Gen. Mark Milley, who did not attend.

‘Gerasimov’s presence was striking and unexplained, but on the whole, I take it as a positive signal,’ Sir Adam Thompson, a former British diplomat who is Director of the European Leadership Network told DailyMail.com.

Biden, on the other hand, brought along a bevy of top diplomats and members of his national security council to the meeting.

‘In my experience, these things are carefully managed – no way it was a surprise,’ one former U.S. government official told DailyMail.com.

Biden himself referenced the composition of his team during his post-summit press conference Wednesday – although he appeared to misstate its composition, while answering a question about summit wrapping up sooner than expected. Biden chalked this up to each man saying what he had to say.

‘The reason it didn’t go longer is: When is the last time two heads of state have spent over two hours in direct conversation across a table, going into excruciating detail? You may know of a time; I don’t. I can’t think of one,’ Biden said. ‘So we didn’t need, as we got through, when we brought in the larger group – our defense, our intelligence … my Secretary of State was with me the whole time – our ambassador, et cetera. We brought everybody in. We had covered so much,’ Biden said. 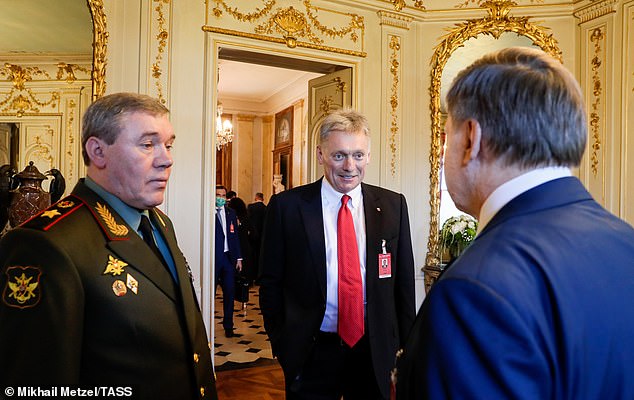 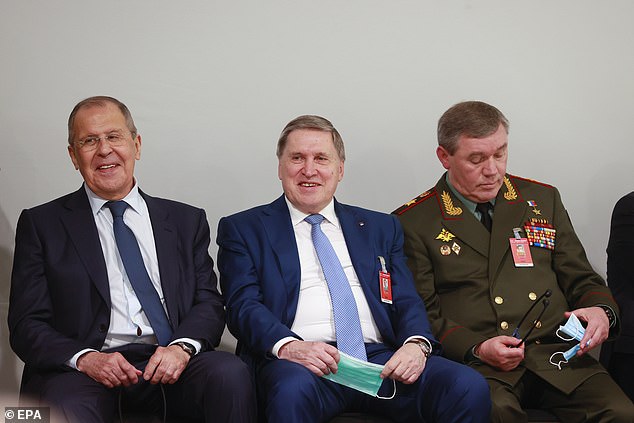 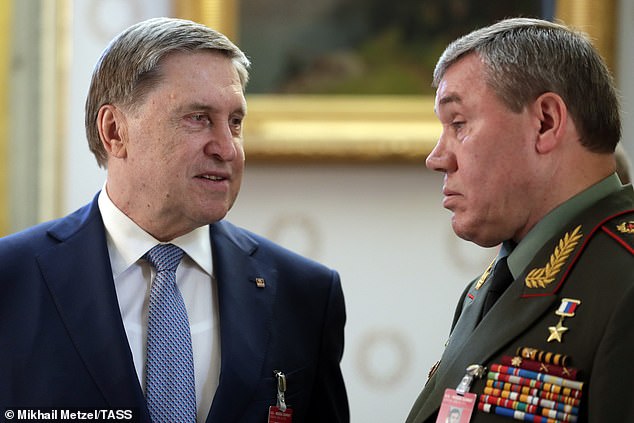 Russian Presidential Aide Yuri Ushakov (L) and Valery Gerasimov, Russia’s First Deputy Defense Minister and Chief of the General Staff of the Russian Armed Forces, talk ahead of a Russia-United States summit at the Villa La Grange. Gerasimov’s presence could be a signal Russia took the meeting seriously. Topics such as Afghanistan, Syria, and hacking came up 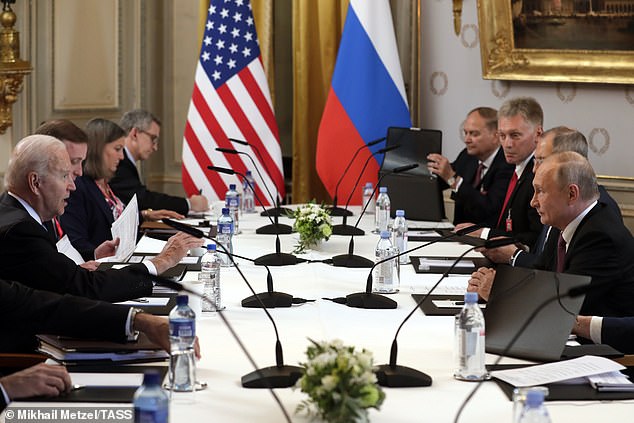 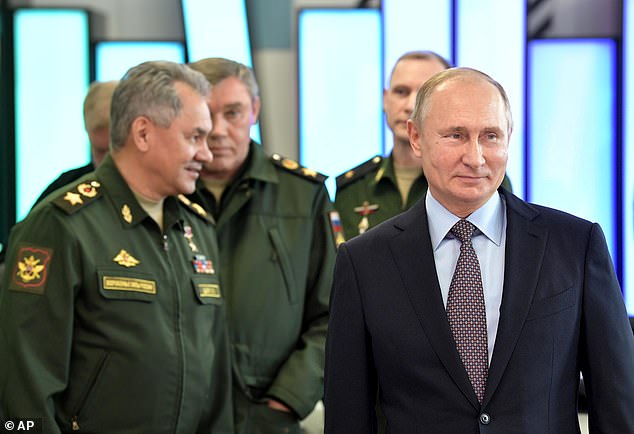 The White House only provided the full list of attendees to reporters Wednesday night, after the summit was over, with no further discussion. It did not respond to requests for comment about the general’s attendance or any asymmetry.

There are plenty of reasons to include high-level military representation. Biden said one topic that came up was ‘how we can each contribute to the shared effort of preventing a resurgence of terrorism in Afghanistan’ – where Russia has a historic role.

Biden also spoke about the ‘urgent need’ to reopen humanitarian corridors in Syria – a move that would require cooperation of the Russian military.

There have been some tense confrontations between U.S. and Russian military personnel in Syria.

And the U.S. has long maintained that a Russian military intelligence unit, the GRU, is behind election hacking efforts in 2016.

Biden said he raised election interference directly with Putin. And the U.S. says the GRU has undertaken brazen operations against allies as well.

In October 2020, a federal grand jury in Pittsburgh charged six hackers who it said were members of ‘Unit 74455 of the Russian Main Intelligence Directorate (GRU), a military intelligence agency of the General Staff of the Armed Forces.’

The indictment said the military hackers and coconspirators engaged in hacks ‘to undermine, retaliate against, or otherwise destabilize: (1) Ukraine; (2) Georgia; (3) elections in France; (4) efforts to hold Russia accountable for its use of a weapons-grade nerve agent, Novichok, on foreign soil; and (5) the 2018 PyeongChang Winter Olympic Games after Russian athletes were banned from participating under their nation’s flag, as a consequence of Russian government-sponsored doping effort.’

Two presidents, six diplomats – and only one general: why did Putin bring the head of his joint staff to the summit?

Sergey Lavrov, Minister of Foreign Affairs of the Russian Federation

Dmitry Peskov, Deputy Chief of Staff of the Executive Office of the President and Press Secretary

Yury Ushakov, Aide to the President of the Russian Federation

Valery Gerasimov, Chief of the General Staff of the Armed Forces and First Deputy Minister of Defense

Anatoly Antonov, Ambassador of the Russian Federation to the United States

Sergey Prozhogin, Deputy Director of the Department of North America of the Ministry of Foreign Affairs

If Biden wanted to deliver a stern message to the Russians to roll back hacking efforts by the GRU or proxies, Gerasimov is one person the U.S. side would want to hear it. He also is someone U.S. counterparts already know, having served in his post for nine years.

In addition, having his powerful military chief in the room may have provided Putin another way to angle for macho advantage in a summit willed with one-upmanship. The two sides selected Switzerland, a neutral country, at a time when Biden could tack it onto an existing trip, rather than a special visit to a country within Moscow’s sphere like a past summit in Slovenia.

It was decided Putin would arrive first – which prevented him from rolling in half an hour late like he did to an Obama summit. Even the transport became a subject of comparison, with Putin landing in his presidential aircraft just half an hour before the appointed time, a day after Air Force One arrived.

Gerasimov isn’t the only high-level military official the Russians could have sent. Thompson said it was striking that Gerasimov was there but not Russian Defense Minister Sergey Kuzhugetovich Shoigu or Secretary of the Russian Security Council Nikolay Patrushev, who is Jake Sullivan’s counterpart.

Sullivan met with Patrushev in May to prepare for the summit.

Having Gerasimov present also builds on an existing channel. Even amid serious breakdowns in communication, military-to-military talks have been among the most effective lines of communications, including efforts to ‘deconflict’ after the U.S. launched a bombing campaign in Syria.

The former U.S. official called it ‘one of the only bilateral channels that works still.’ In the past, when the chair of the joint chiefs of staff ‘calls Gerasimov and sends a message, the Russians listened.’

Nuland herself spoke to the utility of the channel in 2018, when the Trump administration set up military-to-military contacts amid tensions over Syria and other issues. ‘These channels are especially vital at a time when relations at the leader level are so unpredictable,’ she said at the time.

His presence could also send a message about the political influence of the military within the Russian state.

Devastated family of a woman found dead in Gympie, Queensland bushland speak out