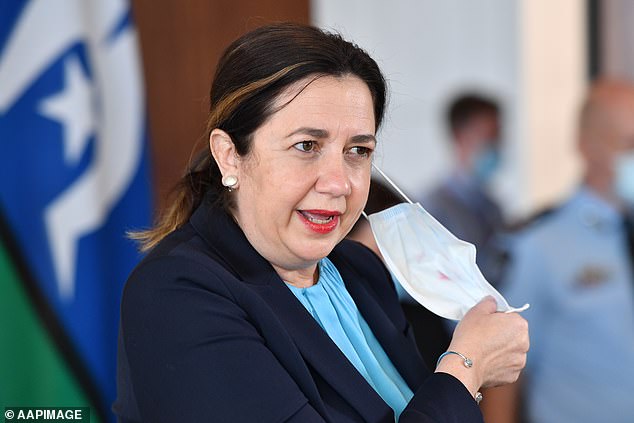 Queensland has recorded two new local Covid cases overnight – including a worrying case in which an unvaccinated hospital receptionist travelled widely while infectious.

The 19-year-old casual clerical worker from the Prince Charles Hospital worked as a receptionist outside a Covid-19 ward.

She travelled between her home in Sandgate to Magnetic Island in Townsville at the end of last week and attended the Sunday markets in Townsville.

‘Despite the health directives that she should have been vaccinated, she was not,’ Premier Annastacia Palaszczuk said. ‘Let me say, I am absolutely furious about this.’

As a result, from 6pm tonight, until 6pm on Friday, South East Queensland, Townsville City, Palm Island and Magnetic Island will go into lock down.

Premier Annastacia Palaszczuk: ‘Let me say, I am absolutely furious about this’ 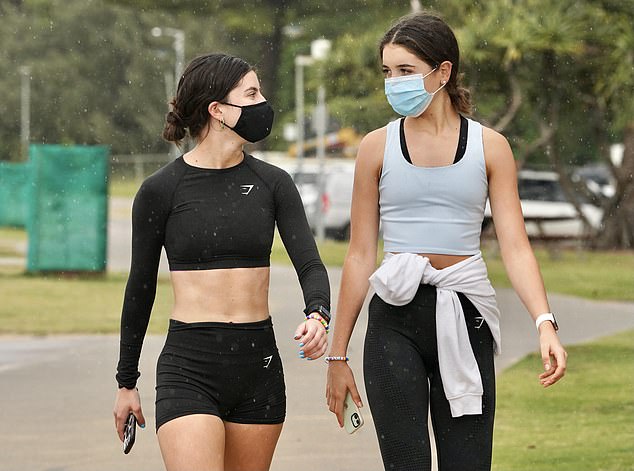 Masked women exercising while on the Gold Coast, Tuesday, as South-East Queensland enters a three-day lockdown

‘Two of her family members who live in the same household are unwell. We urgently are testing them and one of her close friends is unwell, so we’re urgently testing them,’ Chief Health Officer Jeannette Young said.

The woman visited  Sandgate Woolworths between Sunday 9.30am-10.30am a week ago, the Bay Health Gym from 10am-12pm on the same day.

She  worked a shift at the Prince Charles Hospital from 3:00pm to 10:00pm on the Tuesday and Wednesday last week.

The woman travelled with her family on VA369 from Brisbane to Townsville on Thursday, 24th at 10:00am.

Sunday, June 27: Travelled from Magnetic Island back to Townsville. They went to the Sunday morning markets in Townsville City late morning, then caught VA374 from Townsville to Brisbane on Sunday, June 27, landing at Brisbane Airport at 2.55pm

The lockdown means Queenslanders in the affected areas can only leave home for one of four reasons: Essential education and work that cannot be done at home or to obtain health care services, including getting a vaccination. Care or support of a vulnerable family member, essential shopping in your local community, or exercising with no more than one person, not from your household in your local community.

Earlier in the week there were grave concerns about dozens of miners who may have returned home carrying the Indian Delta variant of Covid-19.

One of the 170 miners is already confirmed to have the highly contagious variant after spending a day out and about in the Sunshine Coast while infectious.

Authorities are waiting on test results for the other 169, who have been ordered into isolation after returning from an NT mine where 900 staff have been identified as close contacts. 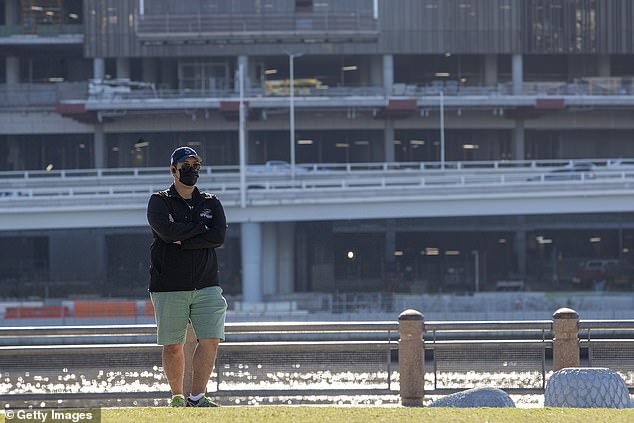 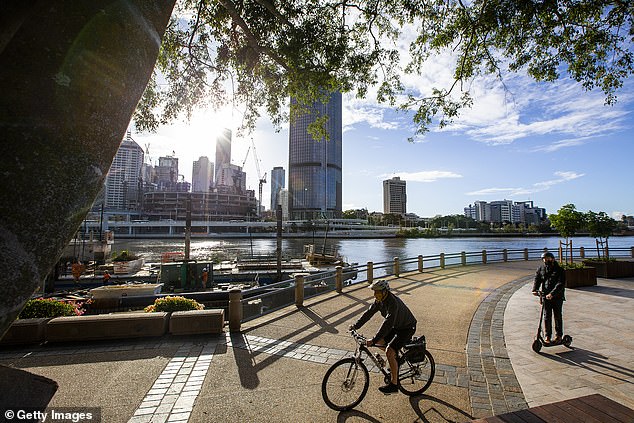 They were potentially exposed after a Victorian worker there became infected while passing through a Brisbane quarantine hotel, en route to the mine.

Premier Annastacia Palaszczuk has warned that the state’s southeast will go into lockdown if unlinked cases emerge on Tuesday and Wednesday.

‘When we have unlinked community transmission,’ she told reporters on Monday.

‘This is the Delta strain, you’ve seen how quickly it escalated in NSW over a period of about 10 days.

‘So, you know, we’re looking at this day by day and we will not hesitate to take action.’

Face masks are now mandatory indoors and outdoors in 11 local government areas across the southeast for 14 days. 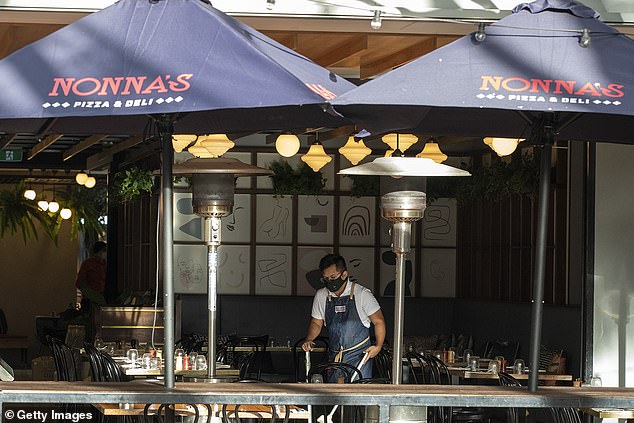 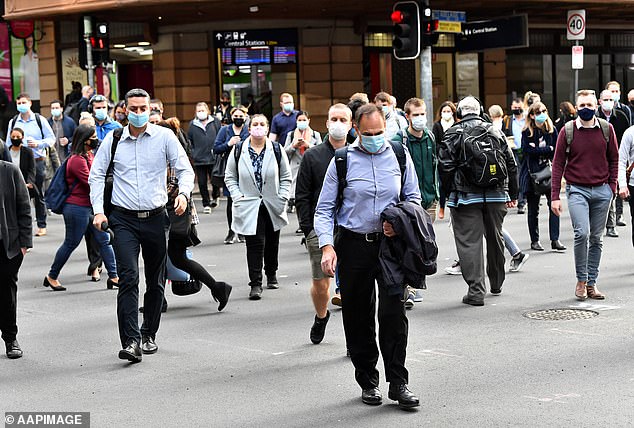 The government is concerned about passengers who travelled with an infected crew member on flights from Sydney to Brisbane and the Gold Coast over the weekend.

Another six Virgin flights into and out of Brisbane, Sydney, Melbourne, Darwin and the Gold Coast on June 25-26 were added as Covid-19 exposure sites by Queensland Health.

Even 63 police officers have become caught up in the potential outbreak.

Some officers patrolling the State of Origin game at Suncorp Stadium on Sunday night had to leave mid-match upon being ordered to self-isolate.

The officers are among police staff who may have been exposed to a Brisbane watch house cleaner who was infected with Alpha strain Covid-19.

The Australian Logistics Council has urged the state to follow other jurisdictions in relaxing curfews on deliveries so people isolating can access essential items. 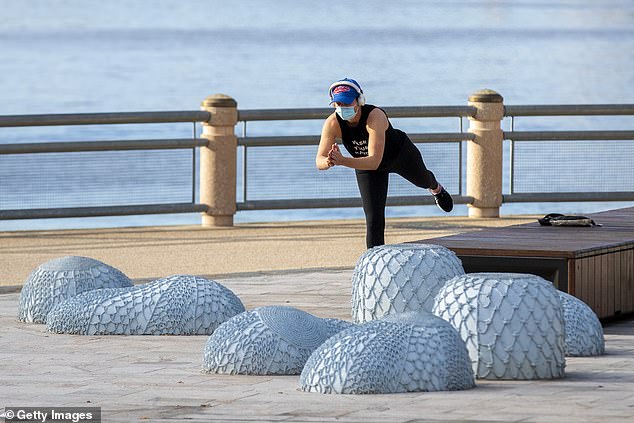 Another six Virgin flights into and out of Brisbane, Sydney, Melbourne, Darwin and the Gold Coast on June 25-26 were added as Covid-19 exposure sites by Queensland Health

‘The latest Covid outbreak is once again causing chaos inside the Queensland state as the government has been unwillingly to relax the delivery curfews to allow for supply chain to meet the demands of essential goods to communities,’ the ALC said in a statement on Tuesday.

Meanwhile, Queensland’s war with the federal government over purpose-built quarantine facilities is rolling on.

The state says hotel quarantine for international travellers is Australia’s greatest single source of Covid-19, and has accused the Commonwealth of letting in too many foreigners. 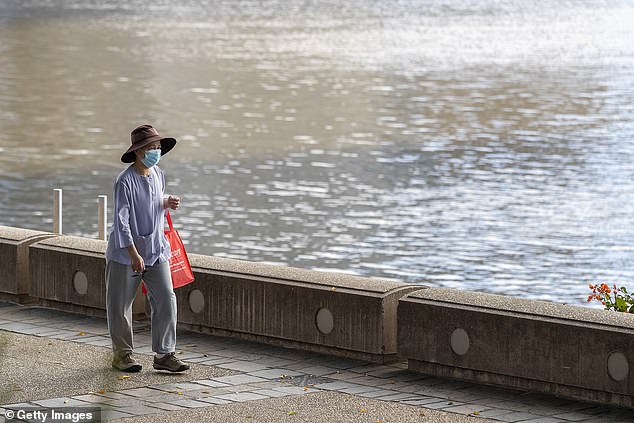 Meanwhile, Queensland’s war with the federal government over purpose-built quarantine facilities is rolling on

Deputy Premier Steven Miles said half the people coming in to Australia are not citizens or permanent residents, but others who’ve been granted travel exemptions.

Queensland is seeking to cut overseas arrivals, saying the volume is putting pressure on a hotel quarantine system that’s already failing, and was never designed for infection control.

The state is still demanding the federal government approve its plans for a purpose-built quarantine centre outside Toowoomba, even thought Canberra has repeatedly rejected it and wants one built on Commonwealth land in Brisbane.

Britney Spears conservatorship: Jamie Lynn Spears says she is ‘so proud’ of her sister ‘using her voice’ | Ents & Arts News