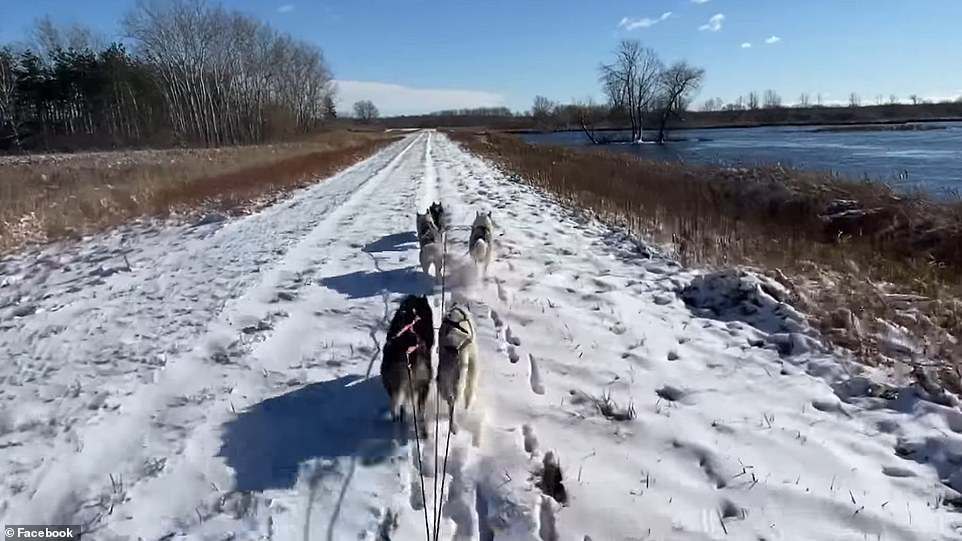 A large meteor was seen in parts of the northeastern United States and southern Ontario as dramatic images captured on social media show an intense flash that lit up the afternoon sky and created a loud boom that shook the ground.

The American Meteor Society reported some 150 sightings from residents who saw the fireball over parts of Maryland; Washington, DC; Virginia, Pennsylvania; New York; Ontario; and Michigan on Wednesday.

NASA officials released satellite imagery showing the meteor entering the Earth’s atmosphere over central New York State in the region that lies between Rochester and Syracuse.

Bill Cooke, the head of NASA’s Meteoroid Environment Office, told NBC News that the meteor was traveling west at 56,000mph at around 12:08pm Eastern time when it entered our atmosphere.

Bekka Gunner was out dog sledding in Royalton, a town in Niagara County just east of Buffalo, New York, on Wednesday 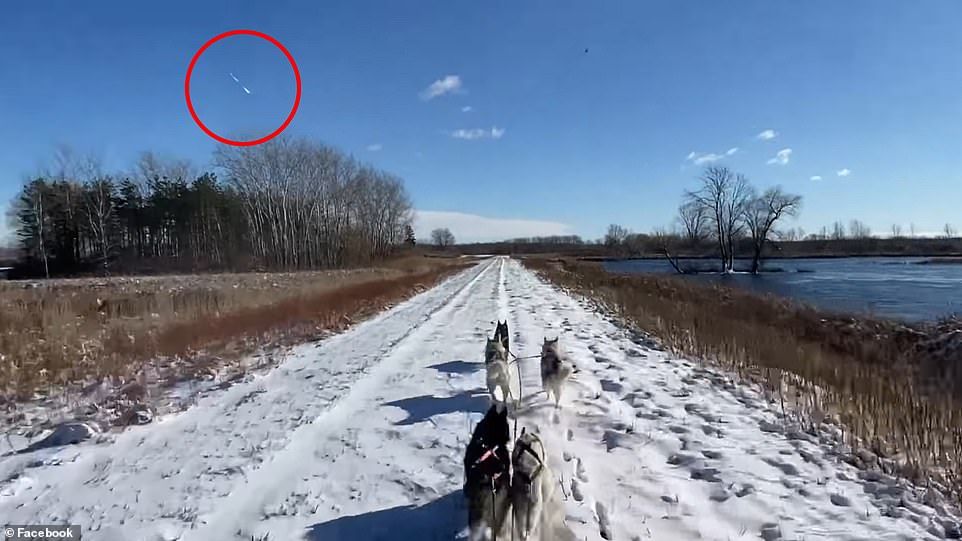 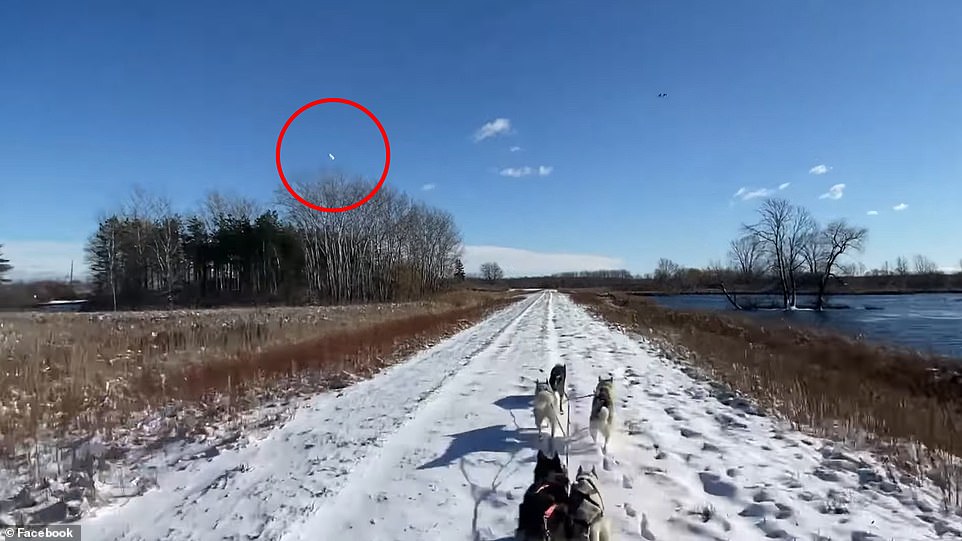 ‘What I thought I saw was a kite, it looked like someone had let their kite go,’ she said. ‘It kind of looked angular, purple and greenish just like shiny looking thing and then before you blink an eye it’s gone.’ 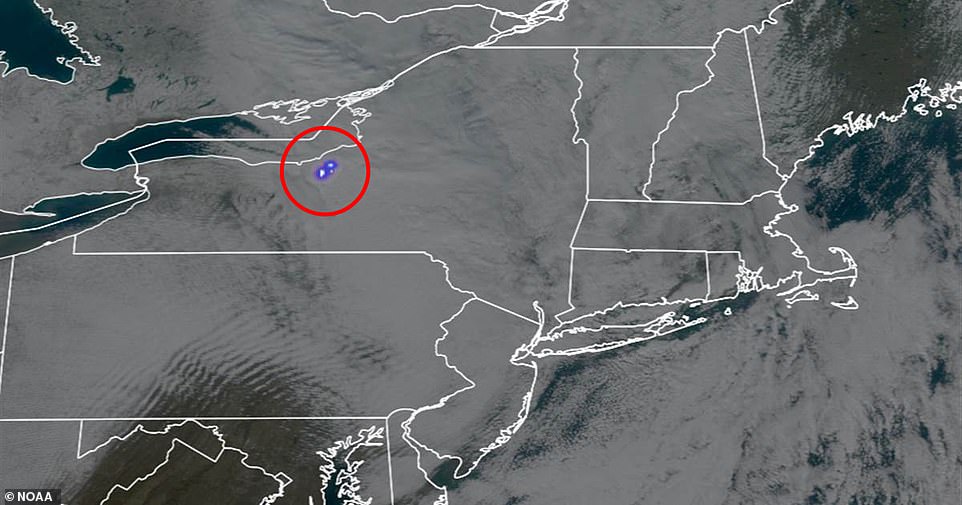 A satellite image released by the National Oceanic and Atmospheric Administration shows the meteor entering the Earth’s atmosphere between Rochester and Syracuse, New York, on Wednesday just after noon Eastern time 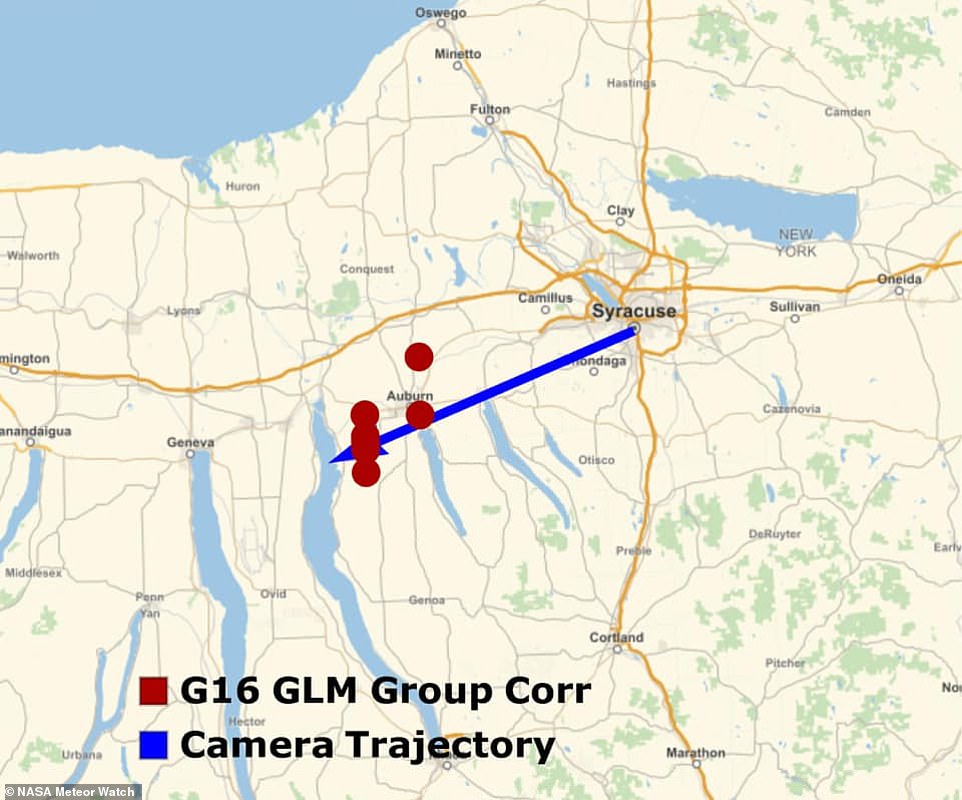 It then broke into pieces some 22 miles above the surface of the Earth over Central New York, creating a sonic boom.

Emergency dispatchers in Onondaga County, which includes Syracuse, said they received multiple 911 calls from alarmed residents who heard the boom.

Locals from nearby Oswego and Madison Counties made similar reports, WTSM-TV reported.

Bekka Gunner was out dog sledding in Royalton, a town in Niagara County just east of Buffalo on Wednesday afternoon when she accidentally captured the image of the meteor on her cell phone.

‘Actually, my phone was out because I was trying to record swans, because there are swans in the swamps right now,’ Gunner told WGRZ-TV. 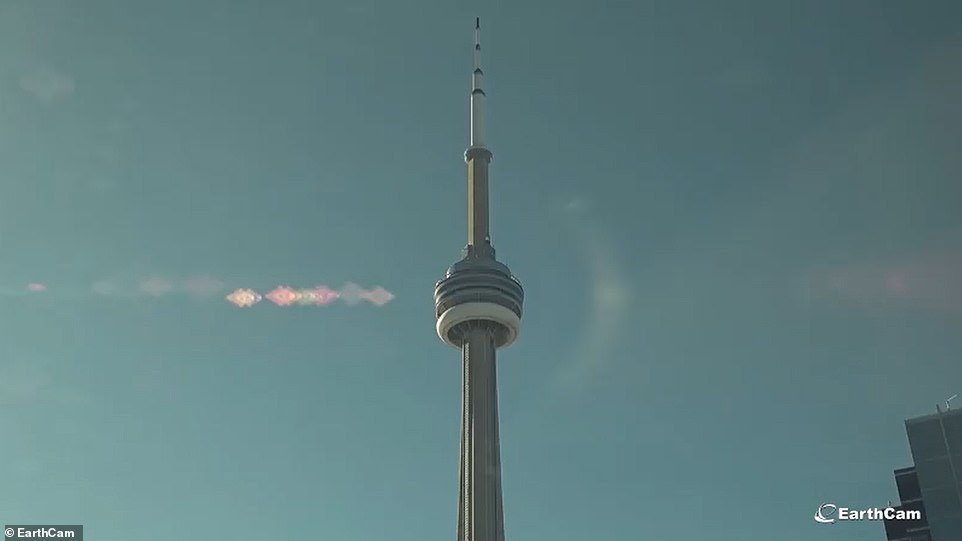 Dramatic footage of the meteor was also captured by EarthCam video in downtown Toronto, Canada, on Wednesday 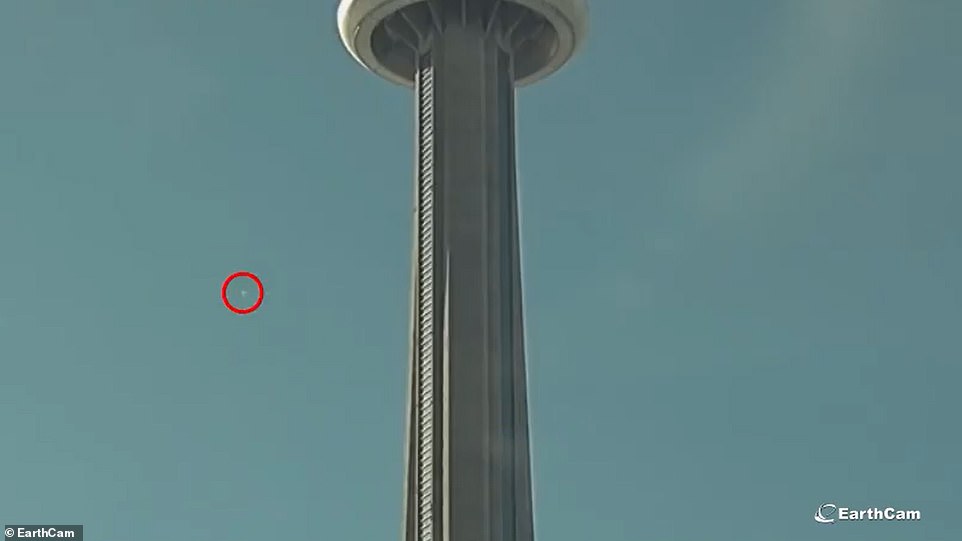 It shows the meteor pass overheard above the 1,815ft CN Tower skyscraper in Toronto on Wednesday 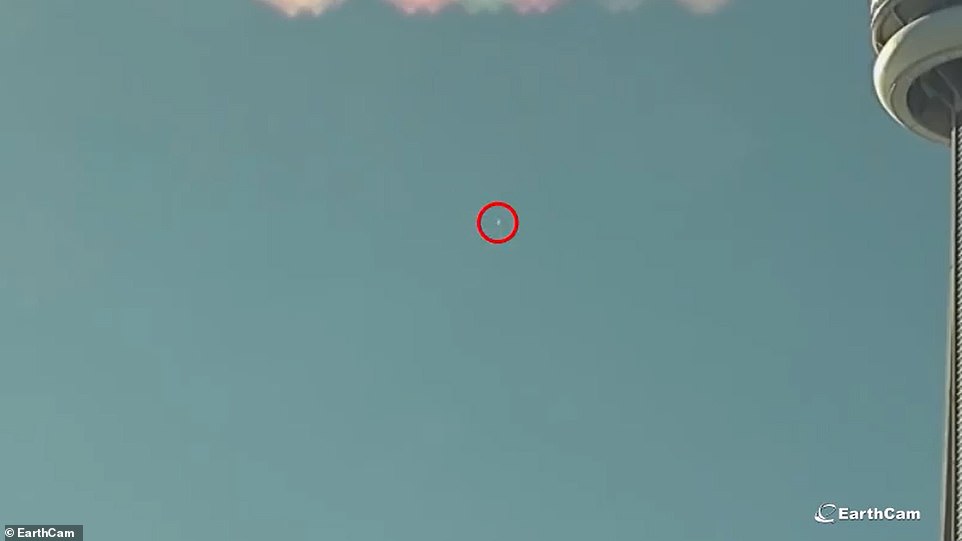 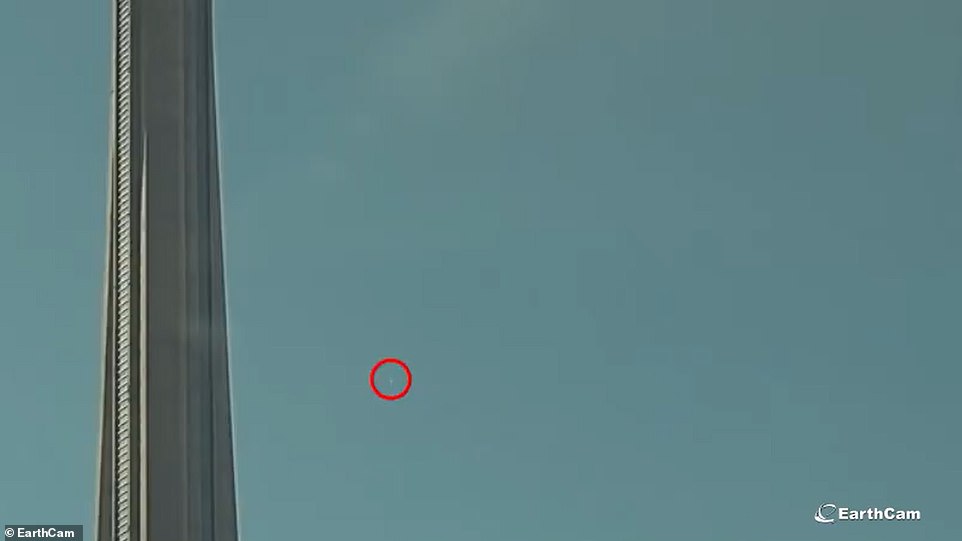 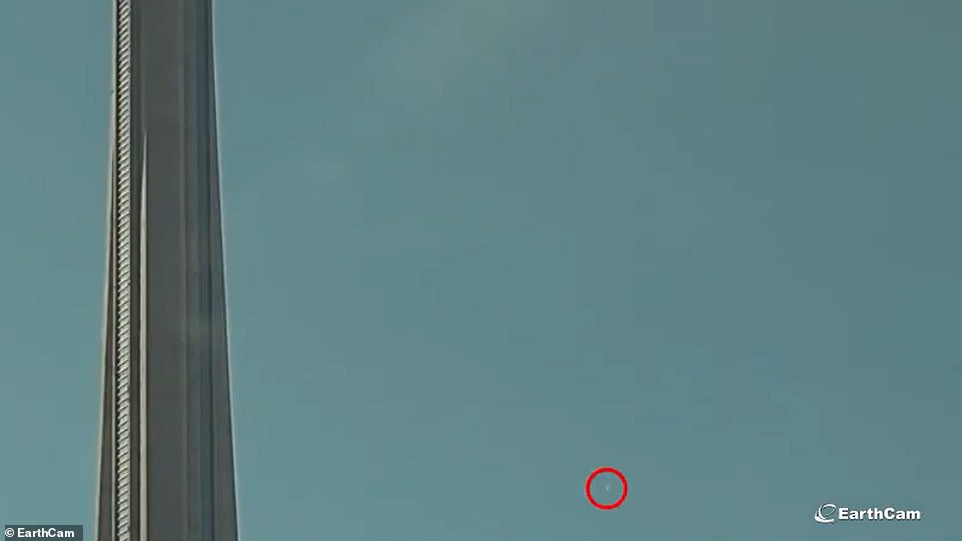 After she tried to record the swans, she then aimed her phone back in the direction of the sled team. That’s when she saw the strange object in the sky.

‘What I thought I saw was a kite, it looked like someone had let their kite go,’ she said.

‘It kind of looked angular, purple and greenish just like shiny looking thing and then before you blink an eye it’s gone.’

On social media, Twitter users from Central and Western New York posted messages saying the noise was so loud their houses shook.

A woman named Heidi tweeted: ‘House shook in Clay – super loud noise that made me think something landed on my roof!’

‘In the city of Syracuse and I heard it. Thought something fell on my house!’ tweeted Syracuse resident Mary Wasilewski.

Heather Trovato, a resident of nearby Liverpool, New York, tweeted that the noise was ‘so loud and scary’ that she ‘thought a tree fell on my house.’ 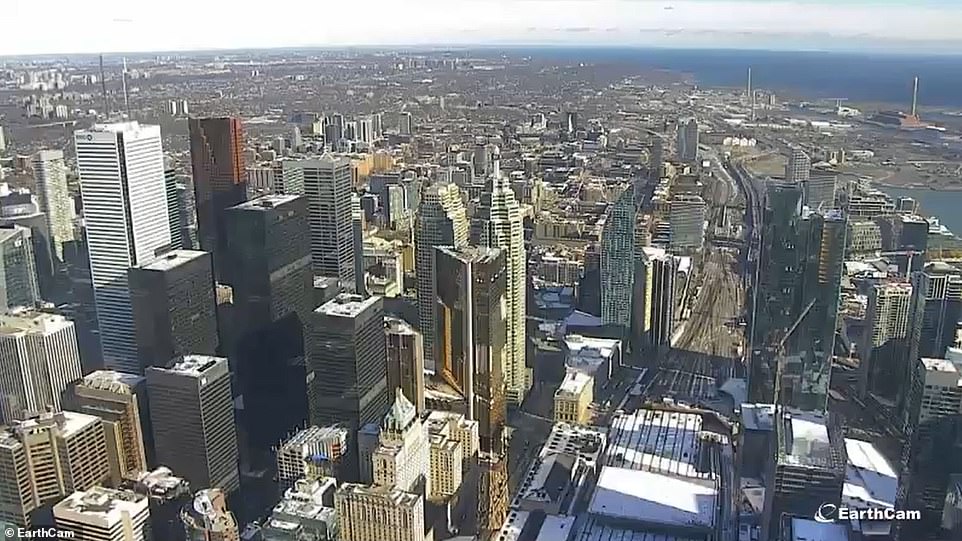 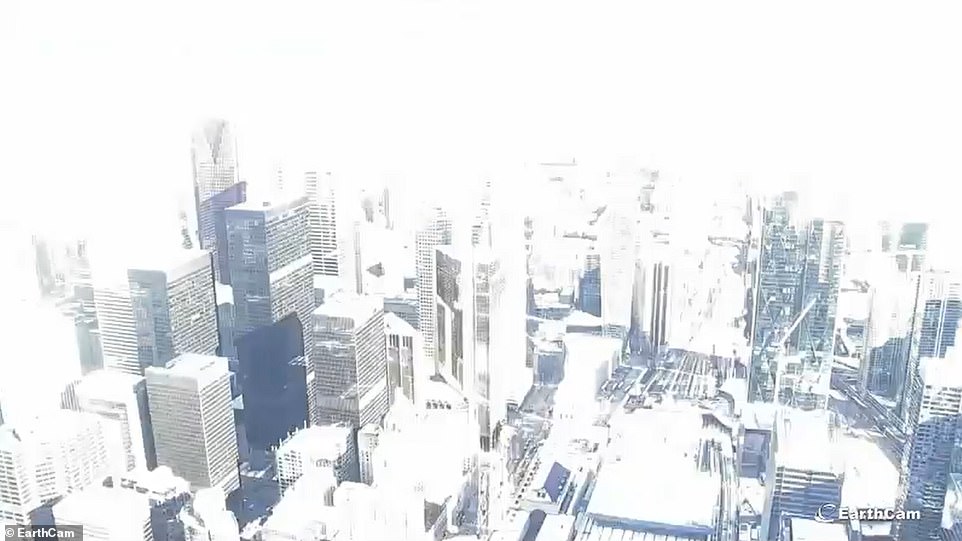 Another Twitter user wrote: ‘Heard it here in Oswego County as well.’

Robert Lunsford of the American Meteor Society said he has ‘no doubt’ it was a meteor entering the Earth’s atmosphere.

‘It couldn’t have been anything else,’ Lunsford said.

He added: ‘To have something so close to a major city, that’s pretty rare.’

Lunsford said usually most meteors just ‘drop in the water.’

An EarthCam positioned at the top of Toronto’s 1,815ft CN Tower skyscraper showed a massive flash of light engulfing the entire metropolitan area.

Cooke said that the meteor’s low entry speed suggested it was likely a remnant of an asteroid.

He added that since few videos of the meteor have surfaced, it is difficult to track the object’s orbit.

This is the second time this week that a large fireball was observed in Earth’s atmosphere.

A brightly burning meteor was seen plunging from the sky in wide areas of Japan on Sunday, capturing attention on television and social media.

The meteor glowed strongly as it rapidly descended through the Earth’s atmosphere on Sunday.

Many people in western Japan reported on social media seeing the rare sight.

NHK public television said its cameras in the central prefectures of Aichi, Mie and elsewhere captured the fireball in the southern sky.

A camera at Nagoya port showed the meteor shining as brightly as a full moon as it neared the Earth, the Asahi newspaper reported.

Some experts said small fragments of the meteorite might have reached the ground.

‘The sky went bright for a moment and I felt strange because it couldn’t be lightning,’ said one Twitter user who saw the fireball.

‘I felt the power of the universe!’

‘Was that a fireball? I thought it was the end of the world…’ said another, tweeting a video of the meteor captured while driving.

Meteors are bits of rocks and ice ejected from comets as they move in their orbits about the sun.

When a meteoroid enters the Earth’s upper atmosphere, it heats up due to friction from the air. The heat causes the gases around the meteoroid to glow brightly, and a meteor appears.

Witnessing a fireball is a rare event – the vast majority of these meteors occur over oceans and uninhabited regions.

Those fireballs that happen at night also stand a small chance of being detected because few people are out to notice them. 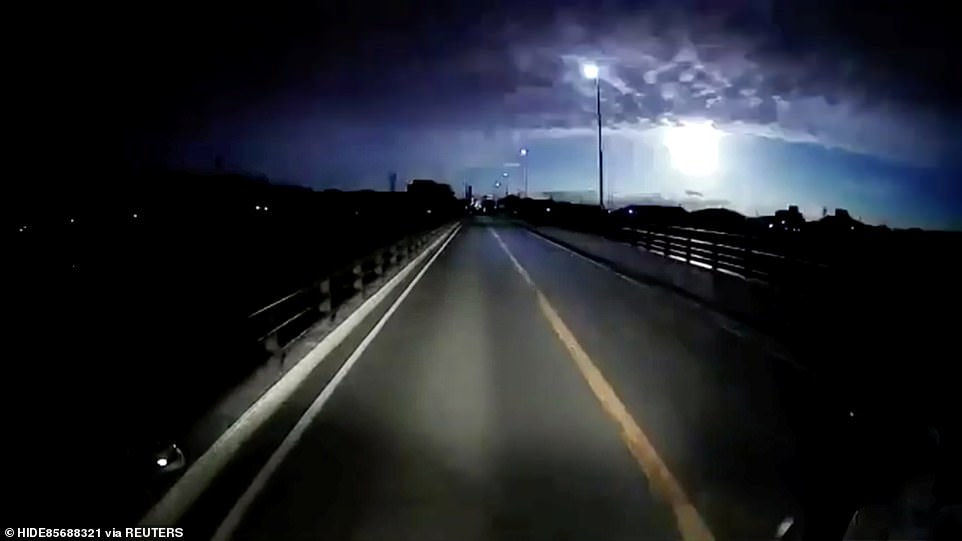 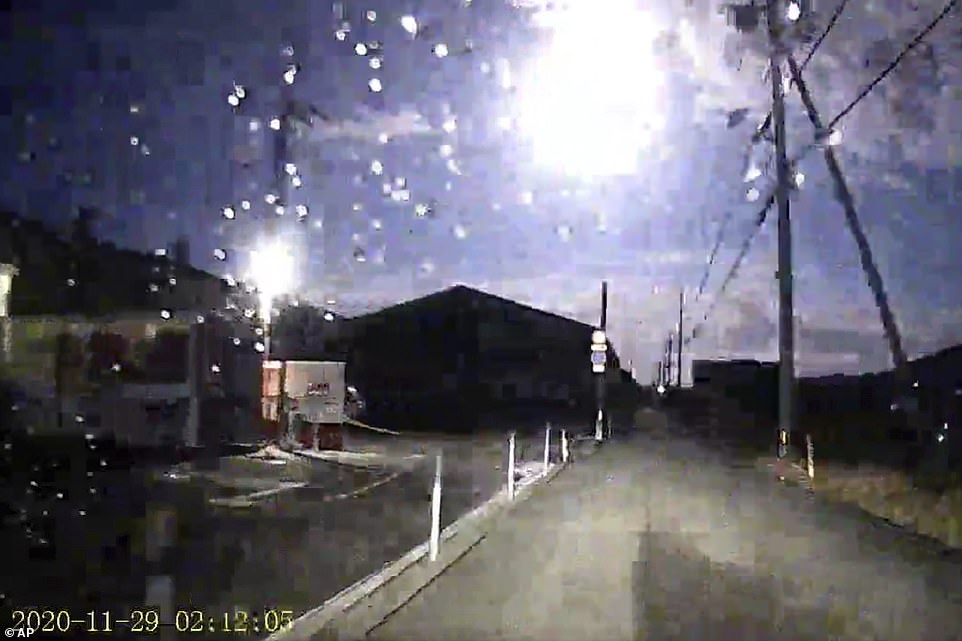 Dashcam footage showed the bright meteor (center top), believed to be a bolide, in the Tokushima prefecture 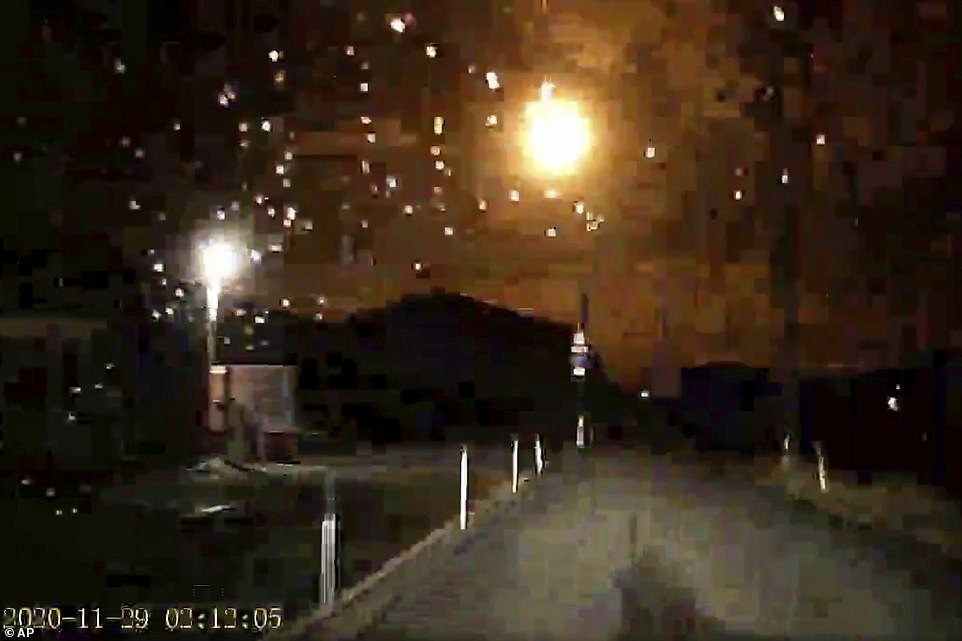 NASA says that the odds of ever finding the meteor responsible for Wednesday’s theatrics are slim since most rocks that are smaller than a football field break apart once entering the Earth’s atmosphere.

Statistically, less than 5 per cent of the original rock ever makes it to the surface. Those that do range in size between that of a pebble and a fist.

Since most of the Earth’s surface – 70 per cent – is water, finding a remnant of the meteor on land is quite difficult.