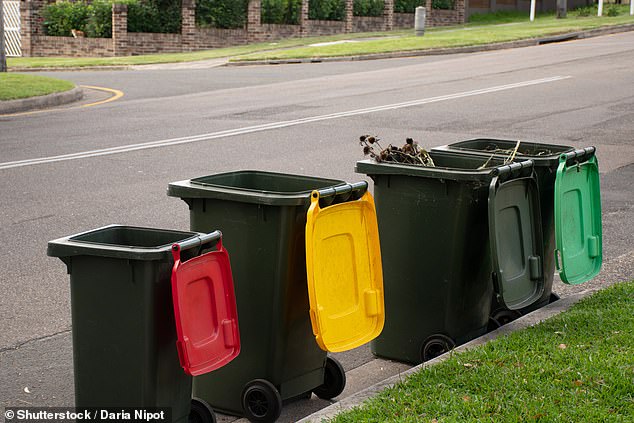 Serial recycling offenders could be slapped with a $660 fine and risk having their bin collection cancelled for dumping waste in the wrong receptacles – but people who do the right thing could win $100.

Residents of the Mornington Peninsula Shire in southern Victoria were urged on Monday to ‘take recycling seriously’ in a crackdown by the council.

Locals who continue to place garbage, such as food scraps, in recycling bins after July 1 will receive three warnings within a six-month period before they are fined.

Collection for repeat offenders will only be reinstated if the resident signs an agreement vowing never to dump rubbish incorrectly again, and attend an education session.

Residents who have their garbage collection cancelled will continue to pay rates for waste removal services.

Bins will be checked at random, and households that dispatch of garbage and recycling correctly will go into a monthly draw to win a $100 voucher.

‘A contaminated bin or truck load is not only a burden to the environment adding to landfill, but also comes at a significant cost,’ she said. 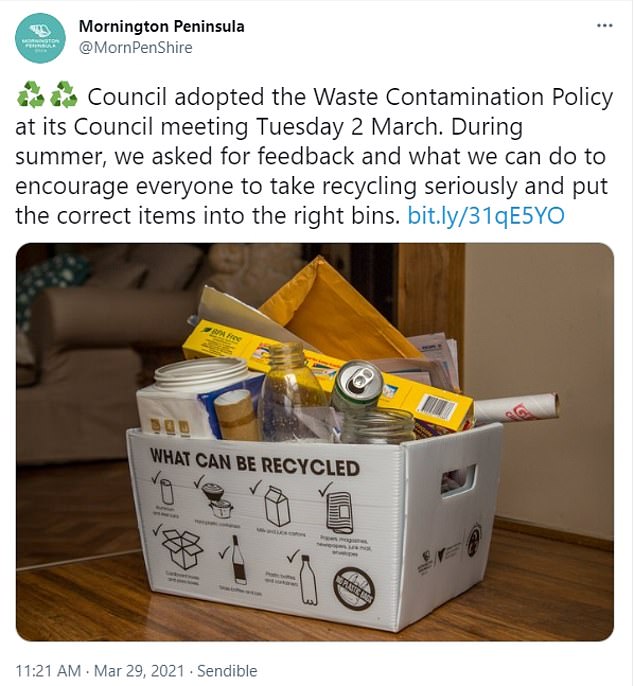 Residents of the Mornington Peninsula Shire in southern Victoria were urged on Monday to ‘take recycling seriously’ in a crackdown by the council (pictured: A tweet by the council)

Broken glass is also not recyclable, and pizza boxes can’t be recycled if there is a large amount of grease in them.

Food containers also need to be rinsed first to remove all food before they can be recycled.

The Mornington Peninsula Shire has a guide on its website detailing what can go into household bins, and where to recycle white goods and electricals.

ITEMS THAT CANNOT GO IN THE RECYCLING BIN

Pizza boxes with a lot of grease

Food containers that have not been rinsed

Disposable cups and cutlery (but coffee cup lids can be recycled)